George RR Martin, the loveably sea-captain-esque author behind the massive fantasy series “A Song of Ice and Fire” (you might know it as HBO’s Game of Thrones) first Tweeted on June 9, 2014, to let the world know that he didn’t plan on Tweeting much after that.

I don't tweet all that much, please check out my live journal page. 😉 #myfirstTweet

Since then, Martin’s Twitter page has almost exclusively been comprised of links to his blog, where he mostly offers musings on everything from the Hugo Awards to the New York Jets to our current President Pussygrabber. All the while, the gap between the last published “Song of Ice and Fire” novel, 2011’s A Dance With Dragons, and the still-incomplete Winds of Winter grows ever longer. The last update fans received on that front was the infamous “Last Year (Winds of Winter)” post from January 2016, which revealed Martin though he could complete the book by 2017, didn’t, and has reverted back to his “it’ll be done when it’s done” approach to answering questions. Then it was back to a full year of Live Journal links.

I wonder what my fans will be talking about in the comments today? Oh…right…The same ultra motivational speeches I get every day… Yay!

Haha, what? Martin went from radio silence to throwing Drogon-sized shade real quick. And honestly, it’s understandable; the dude had a notorious writing speed issue before his story was turned into the biggest television show in history and the world started paying much-too-close attention to whether or not he was going to drop dead. So, yeah, we can afford him one 10:11 PM, possibly drunk break-away from his usual — oh my goodness

So, my publishers say I have to start trying to appeal to a younger audience… pic.twitter.com/T3BZuw6iqB

Roberto the Robot, chilling in my library giving random advice to passers by… pic.twitter.com/ql1OT1tWnY

…and his pet tortoise, Morla.

This is my pet tortoise Morla. pic.twitter.com/aC5IfzyGNZ

Two years of hype and expectation and this adorable Hobbit-man just posted a photo of his pet tortoise Morla.

So, the way I see it, pretty much only three options here:

Stay tuned. MartinWatch 2017 is an ongoing story, which we will update when we have more info. 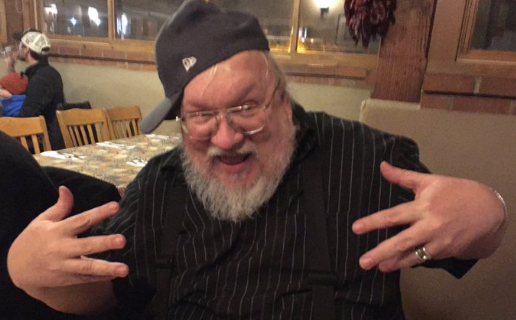