Feminist icon Gloria Steinem joined indigenous people and allies at City Hall this morning to call on Mayor Bill de Blasio and Comptroller Scott Stringer to “take our dollars out” of banks financing the Dakota Access Pipeline and other oil conduits—and to “take our power back.”

On Wednesday evening, the activists began an overnight protest encampment outside the Wells Fargo branch at Grand Street and Broadway in Manhattan to issue a “moral call” to de Blasio and Stringer—both of whom have separately declared their opposition to DAPL—to end the city’s business with banks financing the petroleum transport tube from North Dakota to Illinois, which will run upriver of the Standing Rock Indian Reservation. They also demanded similar divestment of pension dollars and contracts from institutions underwriting the Keystone XL oil Pipeline from Canada to Nebraska and the Pilgrim Pipeline between Albany and Linden, N.J.

On Thursday morning, the encampment broke with a protest march to City Hall, where they held a rally.

“We’re starting to use our individual power and that includes the power of the dollar,” she said. “We are no more going to give our votes or our dollars to those who don’t represent our democracy. So we call on the comptroller, we call on the mayor, we call on each other to take our dollars out of all the banks that support the Standing Rock Pipeline or any other death-bringing measures.”

Steinem—who joined a DAPL protest calling for a boycott of Citibank in December—said that President Donald Trump was not elected by the majority of the people and that his presidency “has caused us to learn how to become a democracy again.” Trump overturned previous President Barack Obama’s decisions to deny crucial permits to the Dakota Access Pipeline, allowing construction to continue.

The Ms. magazine founder told the crowd that she weighed a run for comptroller in 1969, but ended up not doing so because she was “too terrified to speak in public.” She said she had researched the position and knows that the comptroller “has the full power to take our dollars out of banks” that engage in this type of action.

She reiterated that indigenous people and their allies should not take their rights and powers for granted.

“This is a vote, a dollar that we have in our power,” she added. “We are destroying democracy, we are here today to say that we are going to take our power back.”

The crowd—which noted that Seattle recently ended its business with Wells Fargo over its investment in DAPL—yelled chants such as, “We stand by Standing Rock! City by City, Block by Block!”

Betty Lyons, president of the American Indian Law Alliance, said that she and other leaders will continue to push for divestment.

“Indigenous rights are human rights,” Lyons said, with the crowd repeating the chant in response. “These pipelines cause nothing but destruction in all of our communities, in all of our lands and all of our territories and there is no remediation for contaminated and I want everyone to keep reminding themselves of that.”

The leaders have previously noted that the city has significant clout over the banks as a key institutional investor—$165 billion in five pension funds—and as a larger customer for services that the banks provide.

De Blasio and Stringer—both Democrats—have been outspoken critics of the Trump administration’s policies. But Roberto Borrero of the International Indian Treaty Council argued their refusal to totally pull city resources out of the banks involved showed they were ultimately aligned with the Republican president.

Both Democrats have lobbied banks to withdraw their support for oil pipelines, but have warned that pulling city pension dollars out of participating lenders could damage returns for retirees—and would require the support of the system’s full board of trustees.

In March, Stringer and other investors and groups assembled a briefing for global investors with Dave Archambault II, chairman of the Standing Rock Sioux Tribe.

“This is about human rights and basic dignity,” Tyrone Stevens, a spokesman for Stringer, said in an emailed statement. “We have the same goals as those protesting, and there’s no doubt the Standing Rock Sioux’s sovereignty is threatened by this project. This pipeline poses a real risk to the banks, their investors, and the tribe. That’s why Comptroller Stringer believes that the firms involved have a responsibility to act.”

Activists carried out a similar action, also at City Hall, in February.

This story has been updated to include a statement from Comptroller Stringer’s office. 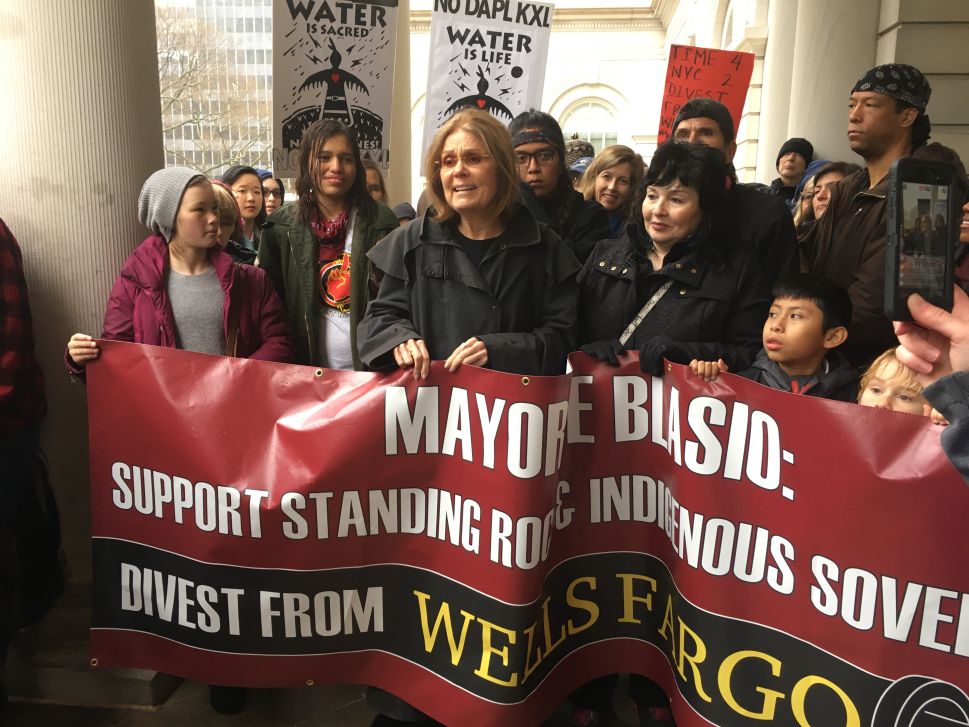