If you, like me, have been wondering for weeks about that third name in the law firm’s title, then this is your week on The Good Fight, because we finally get to meet the mysterious Carl Reddick. The third founding partner is visiting unannounced, holding court in the office as Adrian Boseman arrives, and boy is he unhappy with the direction the firm is taking. That doesn’t extend to Reddick, Boseman, and Kolstad’s newest venture, initiated by their client, a well-known pastor named Jeremiah Easton, who wants help evicting a resident in his Mount Olive Mission house, a man named Paul Johnson (Chris Myers). It’s not something the firm would normally do, but as a favor to the reverend, Diane, Jay Dipersia, and Maia all head out to serve the eviction notice. On the way out of the building, they encounter Henry Rindell in the parking garage, but Maia refuses to speak to him, and it comes out that she’s also been ignoring his calls.

At the house, they serve Paul Johnson the eviction notice, but he claims that the pastor is kicking him out because he terminated some kind of sexual relationship between the two of them. Paul sends his lawyer, Gabriel Kovak, over to RBK, who claims his client was raped by Pastor Jeremiah at age seventeen and voices his intent to press RBK for a cash settlement outside of trial.

Meanwhile, at an art gallery where Colin Morello promised on the phone earlier to go down on Lucca Quinn, as you do, the two are smooching on each other when they’re interrupted by Colin’s mother, a Mrs. Francesca Lovatelli. She gushes over Lucca, whom she perceives to be her son’s girlfriend, and invites her to Colin’s birthday the next night.

In a follow-up meeting at RBK, Pastor Jeremiah is starting to look a little guilty, as Paul’s lawyer Kovak has evidence of three payments from the reverend to Paul, totaling $9,000. And as if that wasn’t incriminating enough, he’s answering all the questions posed to him with scripture. Boseman doesn’t want to take the case, but Reddick does, and he takes things one step further, invoking Article 4, which is a showdown of sorts, allowing him to wrest control of the firm away from Boseman, provided he can get a majority vote within the partners. Both male founding partners go into full campaign mode, trying to win people over to their side.

And just when you thought Pastor Jeremiah couldn’t look guiltier, Kovak has timestamped video footage from the house that shows the pastor going into Paul Johnson’s room, in the late evening, and staying for thirty minutes. The reverend claims it was for a drug test, and that he entered the room only after a dealer did, but the footage doesn’t support that claim. Which may be because the footage is also missing an hour, which Dipersia notices from a jump in the timestamp. Not to be outdone, Marissa Gold notices that Pastor Jeremiah is wearing a FitBit in the video, which means they can take a look at his heart rate during this and every interaction. When they do, they discover that Pastor Jeremiah’s heart rate is gradually decreasing during his interaction with Paul, while Paul’s is gradually increasing, which is not what it would look like if the two were having sex. As a side note, Dipersia also says he’ll sponsor Marissa for a detective license, since she keeps coming up with these clutch observations and basically saving his and the firm’s collective asses for presumably no money.

After ignoring his calls and refusing to speak to him for days, Maia has apparently pushed her dad to some kind of edge, because he called the house sobbing to say goodbye to Amy, and she’s pretty sure it was a final goodbye. Amy rushes to Maia’s work and the two of them rush to the house together, where Henry is making his way through an elaborate and pretty upsetting suicide montage, capped off with him falling a non-fatal distance out of the barn loft as he tries to throw the noose over a beam. Once they arrive, Maia and Amy find the suicide note, then locate Henry, who asks Maia to make this look like it wasn’t a suicide attempt, so that they don’t revoke his bail and put him on suicide watch in prison, which is…honestly exactly where he should be. But as usual, Maia forgets that she’s a lawyer, and one whose father is currently being investigated for criminal wrongdoing, and does what he asks.

At the hospital, Lenore does a whole pageant about not being able to live without Henry, but it turns out Jax drove her to the hospital so that rings a little hollow to Maia, who tells her mother to end her affair. Lenore plays coy, up until Maia does a dramatic reading of the suicide note in the halls of the hospital, because that’s exactly how you should behave when you’re trying to cover up a suicide attempt. Lenore breaks up with Jax right there in the hospital, backlit by vending machines.

Predictably, the family of a rich boy womanizer is a little whacky, and Lucca is not having a great time at the party. Colin’s dad is pretty clearly sleeping with his secretary, and his mom is into the booze. In a random conversation with a lawyer who’s interviewed with RBK, it comes out that Morello is running for senator, and this lawyer suggests that Lucca is a “stepping stone” to help him get there. Reminding me once and for all why I can’t get behind her as a character, she says none of this to Morello, but just gets her coat and leaves without communicating any of this to Morello, even when he catches her putting her coat on. Even the next day, when he confronts her about what happened at the party to put her off, she won’t give him any information whatsoever, coldly rejecting him at the parking garage only to cry in her car. Sorry girl, take it up with the writers, but I really can’t churn up any empathy for you until you start learning how to communicate your feelings and actually get what you want, instead of acting like a big ol’ ghosting asshole all the time.

Diane explains the FitBit results to Kovak, but he’s not deterred by the destruction of his evidence because he has even more claims to bring forward. This time, he claims his client can identify a distinguishing mark on the pastor’s penis, and the firm wants to go along with it, telling the reverend that all he has to do is provide a photo of his genitalia to prove that the mark isn’t there. But it appears that Paul and his lawyer took an intelligent gamble on Pastor Jeremiah because he’s too proud to provide said photo. (Um yeah, I get that, I’d rather my law firm not have any photos of my genitalia either. Just if I have my druthers.) Boseman recommends that the pastor pay out, and won’t reveal to him whether he believes his story or not. But after flipping back and forth all episode about who seemed more credible, we finally discover that Pastor Jeremiah is the wounded party, here. Using the FitBit data again, Marissa and Jay notice that Paul’s daily jogs used to be random, but that he started visiting his lawyer’s office two weeks ago, before this case was even brought, so why would he need a lawyer? It turns out that Kovak is connected with the alt-right cause First Charter Choice, which is subsidizing this lawsuit in order to embarrass Pastor Jeremiah. The firm announces their intent to file a civil suit against Kovak and FCC, and they all laugh happily, brought together their common enemy.

But the love-fest doesn’t last. After a blizzard of last-minute campaigning, it’s revealed that Reddick brought Julius Cane in to vote, which gives him the victory over Boseman, and means he can take the firm away from him. That is, until Kolstad casts her vote as well, not just for Boseman, but for the future of the firm. That leaves us with a split vote and sets the stage for a face-off between the founding partners of this historic law firm. 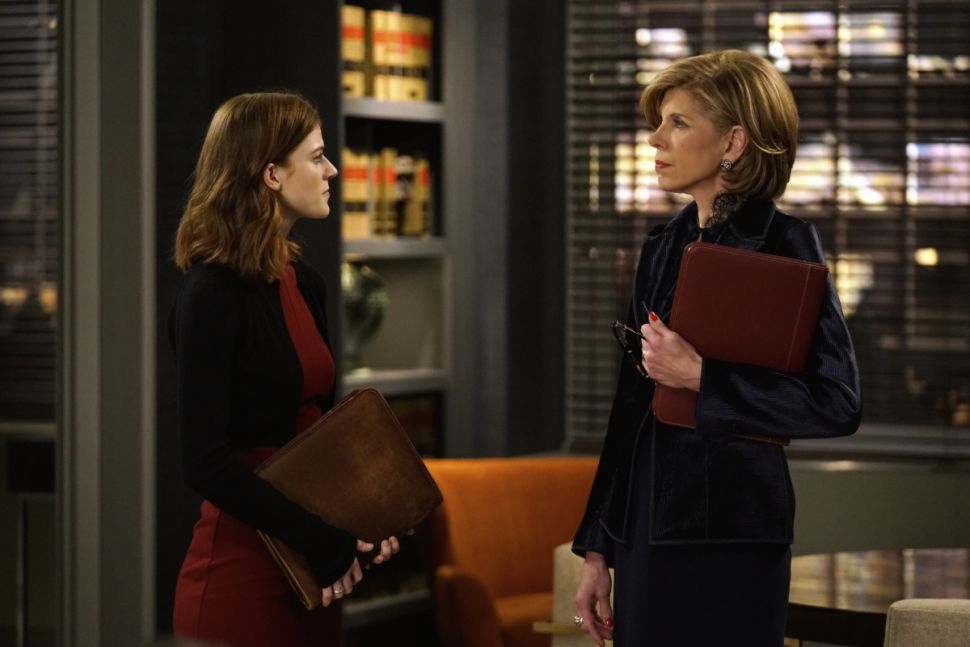