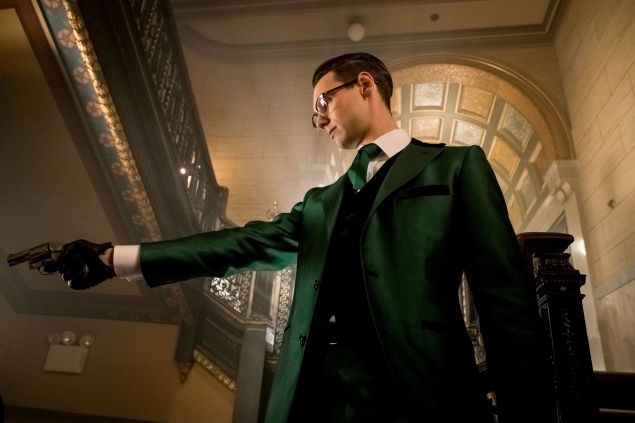 Listen, I know a ton of incredibly wonky nonsense happened in “How The Riddler Got His Name,” seemingly the 26th “premiere” episode of Gotham‘s third season (you can’t just leave and come back and call it a premiere, Gotham!), including some mind-karaoke, Nygma busting out the finest green-suit-bowler-hat combo this side of Bushwick and Bruce Wayne being swapped for a clone who appreciates a good shepherd’s pie. We’ll get to that, all that, but first, there is a moment I want to–no, sorry, that I need to discuss from this episode before it drives me insane like the ghost of my murdered best friend singing a deep-cut Amy Winehouse song in my living room. The setting is whatever woodland sanctuary lies north of Gotham City, the players, Jim Gordon and his sketchy uncle. The moment: Jim looks down the scope of a rifle at a deer, fires, but because the deer is not a faceless henchman Jim Gordon misses and the animal scampers away. “I missed on purpose,” Jim tells his uncle. “I wanted to see if my gun worked.”

That doesn’t make sense, right? I have spent hours trying to decode that one 12-word sentence from Jim. I lost sleep. It’s all I want to talk about. I called my father at like 4 AM to see if he had any input and he just said I was “wasting my life,” but I’m not, dad, because let’s think about this thing for a second: Wouldn’t the more effective way to see if your rifle was working be to shoot the deer? Jim Gordon has point-blank shot more low-level criminals in the face than is morally or even logistically necessary to do his job, so it’s not like he suddenly has some aversion to taking a life. And if the gun is firing blanks it still goes BANG, and the deer is still going to run away. It baffles me to my core as to why Jim Gordon thinks the deer running away proves that rifle works. It’s like if you tossed a piece of cake into the garbage to see if it was poisoned. You learned nothing. You just threw away a piece of cake. You just maybe or maybe not fired a fake gun that scared a deer. Deer are scared of everything, Jim!

And, furthermore, this moment still manages to be both nonsensical and completely in line with Jim Gordon’s character. Let’s not forget that Jim Gordon, for all his successes, is a terrible detective; this man has never finished a Sudoku without smashing a mirror in frustration, is what I’m saying. Trying to decipher whether or not a gun works by doing the exact wrong thing is also 100 percent how Jim Gordon would go about that business. So…yeah. Let’s keep on eye on all that.

Welcome back to Gotham. Onward to much, much more important stuff.

You could say Edward Nygma is having some *issues.* In Gotham City, all issues–be it murdering your best friend who is also the mayor and dumping his body in the harbor, or deciding what to order on Seamless–are traditionally solved by going on a murder spree. So Eddie embarks on a bit of a killing binge, systematically taking out Gotham’s intellectual elite–philosophers, chemists, TV recappers, etc–to try and solidify who he is without the presence of Oswald Cobblepot.

The problem being that the presence of Oswald Cobblepot is still popping up from inside Eddie’s pill-addled head, looking like someone who lost a dice game to Davey Jones. Now, straight up, this episode as a whole is terribly paced; we zip from plot-point to plot-point like Barry Allen ripping the universe apart to give himself an extra day to file taxes. But underneath the mess episode writer Megan Mostyn-Brown has a ton of genuinely clever fun with Eddie and Oswald’s relationship. For one, look at halluci-Oswald’s clothes as he serenades Eddie with Amy Winehouse’s “Wake Up Alone:” 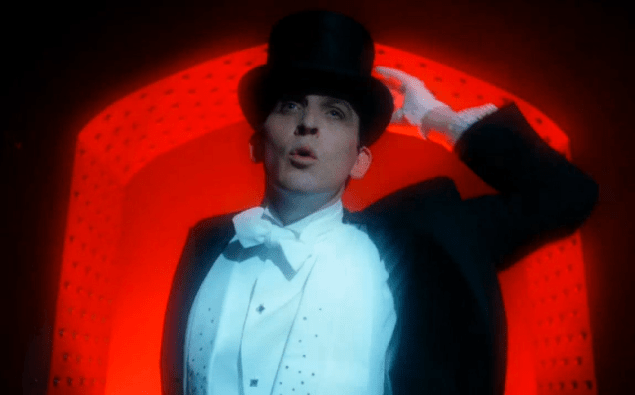 The moment itself felt…awkwardly rushed? Not because Robin Lord Taylor didn’t commit or Cory Michael Smith didn’t properly bug out, but it just felt shoehorned into an already busy episode because someone watched Legion and was like “psychotic breakdown musical interludes are the dopest.” But Oswald’s clothes, look at his clothes; for my money, that’s the first we’ve seen of Gotham’s penguin in classic, top hat and tuxedo attire. He’s 50-odd pounds from going full Devito, but he exists only inside Eddie’s head. Essentially, the Riddler conceived the Perfect Penguin, an inversion of the oft-repeated phrase here, “there is no Edward Nygma without Oswald Cobblepot.”

In fact, a solid 90-percent of this episode is just Eddie violently projecting his insecurities on to the world harder than me Tweeting about how 13 Reasons Why was “just okay.” In Gotham‘s universe, Eddie offers riddles to his victims as an oddball form of self-help. “To solve it is to solve the mystery of the person posing it,” he says, which is one of those things that sounds better to say than it does make any actual sense, but it starts to become a little clearer once we learn what the answers to Eddie’s riddles really are.

Eddie kidnaps Harvey Bullock during a graduation ceremony for newly-minted GCPD officers. He does this by rolling a smoke bomb into the middle of the room, and the fact that every single person just looks at it like “oh no oh no oh no” means they truly are uniquely qualified to serve in the GCPD. Either way, Lucious Fox finds Eddie dangling Bullock over what looks a heck of a lot like a staircase in the New York Public Library, and one correctly solved riddle will set him free. It’s telling that Fox’s first two answers, love and a snowflake, aren’t technically wrong, clearly, but they’re not Eddie’s answers: loneliness and an individual. Which makes it that much more appropriate that the third, correct answer is “a reflection,” proof that the riddles Eddie tells are his way of puzzle-boxing over his own self-doubts, of parsing out the fact that he’s a desperately lonely human being that also feels too unique to ever accept companionship.

For the record, this does not make The Riddler any less of a goober-ass name. 1948 was a different time.

Meanwhile, Bruce Wayne comes face-to-exact-copy-face with his literal reflection, who promptly injects a sedative into his neck and takes over his life. Not much to say there, other than the fact that Alfred Pennyworth’s suspicions over Bruce’s sudden and mysterious enthusiasm for shepherd’s pie is probably going to blow the Court of Owl’s scheme wide open, and that is just incredible.

As always, let’s run down every reference, fact, and nugget of Bat-history brought up in season 3, episode 15, “How The Riddler Got His Name.” 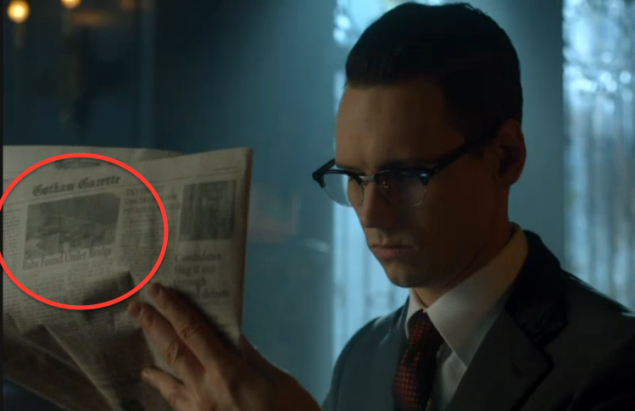 Honestly, this is not a Batman reference in any way, at least that I can think of, I just wanted to say how supremely intrigued I am by the Gotham Gazette headline “Baby Found Under Bridge.” How’d that baby get under that bridge? Who found it, and how? Where is the baby now?

Of course, in the interest of stretching absolutely nothing into something, we can look at that scene, wonderfully staged and shot by director TJ Scott, in which Bruce Wayne puts his future-hero training to its proper use and beats the collective asses of a few teenaged thugs…under a bridge. 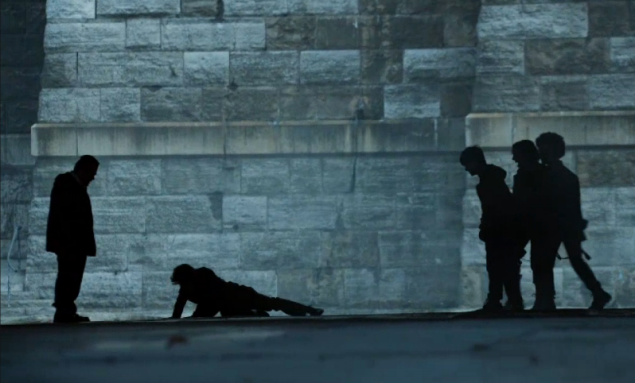 In a way, those thugs did find a baby under that bridge–weak, rich, defenseless–but then that baby punched them in the face until they were unconscious. I think there’s a good lesson we can all take away from that.

WHERE IS BRUCE WAYNE? 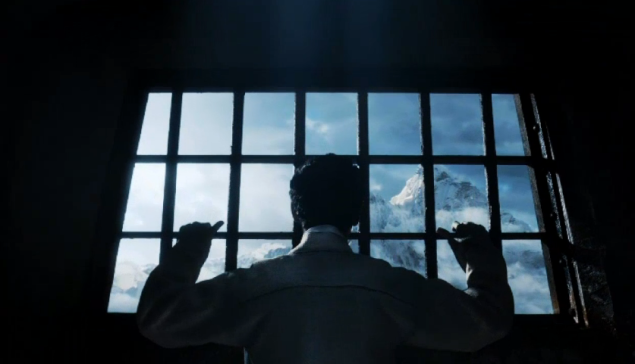 With Bruce’s clone implanted firmly in Wayne Manor, real-Bruce wakes up in a snowy, mountainous cell. Way I see it, we pretty much only have two options here: 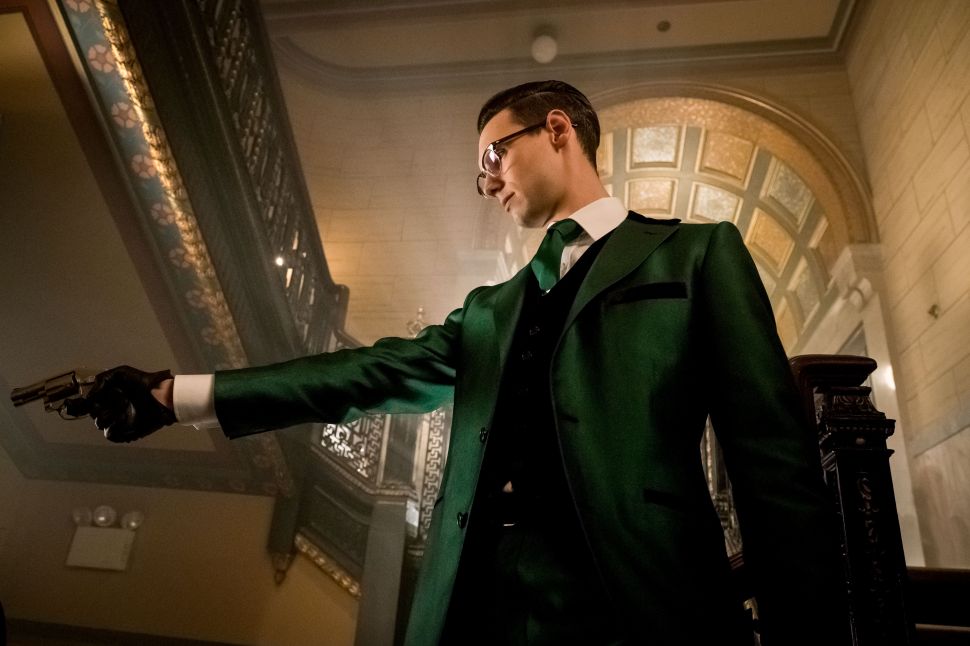