It’s been three years since a developer in Long Island City whitewashed and then demolished a long-neglected warehouse that was the site of many well-respected graffiti artists’ work.

Despite protests from artists and the graffiti community, Jerry Wolkoff proceeded with plans to build what is now a $400 million luxury apartment building, even going as far as to paint over the art works in the middle of the night. Seems like a done deal, right? Nope.

Legally, the developer is not out of the woods, a U.S. District Court judge ruled yesterday, according to a report from Artsy.

Nine artists are part of the suit, which seeks unspecified damages for the destruction of the structure once deemed the “U.N. of graffiti.” According to Hyperallergic, the artists (and their tags) are: Maria Castillo (TOOFLY), James Cochran (Jimmy C), Luis Gomez (Ishmael), Bienbenido Guerra (FCEE), Richard Miller (Patch Whiskey), Kai Niederhausen (Semor), Carlo Nieva, Rodney Rodriguez (PANIC) and Kenji Takabayashi.

At issue is the Visual Artists’ Rights Act of 1990, which gives artists certain rights over their work even when they don’t own it, as Artsy states. Before the building was demolished, the judge in the case interpreted VARA to say that the artists did not have a right to have their work, painted onto the outside of the building and therefore almost impossible to remove, preserved indefinitely. But in 2015, they re-filed suit seeking damages under VARA due to the moral rights and right to integrity of their work under the law, despite ownership or location. Yesterday, Judge Frederic Block in the Eastern District of New York agreed that the artists may have a point, and sent the case to a jury.

It is not clear what manner of compensation they might be entitled to. The developer, for his part, argues that the works were not well-known, despite the artists’ acclaim, perhaps suggesting that if they are awarded damages they should be minimal. 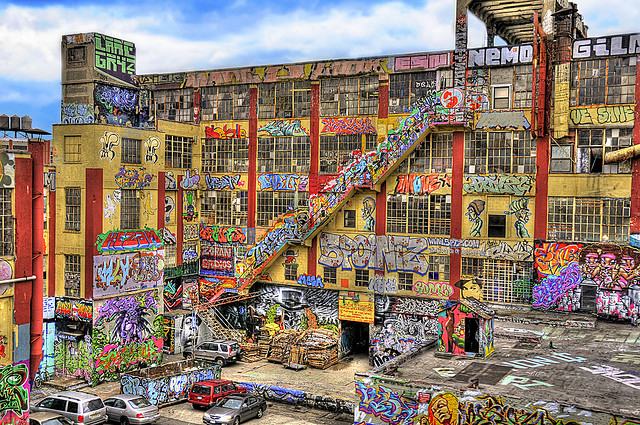