The Handmaid’s Tale on Hulu begins with a scene which was only alluded to in the novel upon which the TV show is based: Offred’s attempted escape with her husband and child.

It’s a heart-pounding sequence straight out of a horror film—first a swerving, speeding car with pursuing sirens, and then running, frantically glancing behind, breaking twigs, hiding and holding one’s breath—and it perfectly establishes the tone of what will become one of the most talked-about television shows of the year. This is a hear-your-heartbeat-in-your-ears saga, made all the more horrifying and visceral by the physical details we get to see of the pursuers: walkie-talkies, ski masks, machine guns across their backs. There are no futuristic facemasks or Hunger Games-style silver body suits. Those details anchor us: this is our world, and this woman has seen her husband shot and her child ripped away from her as she begged. There will be no escape, for her or for the viewer.

The brilliance of The Handmaid’s Tale in part emerges from a quality it shares with the book: it never over-explains, or preaches. Voiceover, so often a crutch employed by complacent screenwriters on a deadline, is only a tool to present Offred’s (Elizabeth Moss) bitter commentary. Instead, we learn everything we need to know about this world from lingering shots of Offred as a faceless shadow in front of white curtains, women with blinders around their head, Serena Joy Waterford’s pinched smile, the succinct glimpse of bodies hanging from a wall with flies swirling around their feet. Symbols stamped into the bags over their heads tell us those bodies’ identities: priest, an abortion doctor, gay man. This is a society in which easily communicated symbolism is very important—whether it be food coupons with pictures for the handmaids to spend (they aren’t allowed to read, or spend money. Do we know if money even exists in this world?) to the way the Commander’s wife maintains eye contact with her husband while he has sex with Offred during the “Ceremony,” Offred lying flat between the wife’s splayed legs. Handmaids wear this, Marthas wear that; totalitarianism lives on over-simplified, self-important ritual.

Offred’s purpose as a handmaid is to reproduce, to act as a vessel for the Commander and his wife and carry a child for them in a world in which environmental disasters have caused an epidemic of infertility among the population. Her name, Offred, is not a name at all but just a title, Of Fred, the first name of the Commander (Joseph Fiennes) who treats Offred with ominous sincerity.

Offred is literally defined by her relationship to the man of the house, but so is Mrs. Waterford—pinched, as put-together as a female Trump, threatened by Offred and defensive that a handmaid is even needed in her home. When Offred is first introduced to Commander Waterford, he offers her a strange, polite, “Nice to meet you.”

“You too,” Offred says, emboldened. The two words hang in the air. As soon as the Commander leaves, Mrs. Waterford tells Offred to stand up. The tiny privilege of sitting has been revoked.

The Waterford household also includes a Martha, a house servant who cooks and cleans, making bread from scratch because that too, is a symbol, a return to “traditional values,” and Nick, the Commander’s flirtatious driver, so low-ranking we’re told he hasn’t even been issued a woman. But even his flirting is a threat: anyone can be an “eye,” or a spy for the right-wing totalitarian government, which means Offred can’t trust Nick, or Ofglen (Alexis Bledel), the handmaid who accompanies Offred to the market every day, her assigned partner. The two women act as each other’s spies, neither certain whether the other is a true believer and so both forced to act perfectly pious.

The camera work is equal parts gorgeous and unsettling: sun flares and aerial shots of hands grasping oranges in a florescent lit grocery store create the sense of a pastoral Stepford Wife fantasy; with their bonnets and red cloaks, handmaids look like figures in a strange Van Eyck painting, especially when Offred stands in her cool-toned room, natural light filtering through her one window. This is a world of manufactured wholesomeness.

Flashbacks allow us to follow Offred’s original entry into this strange society: brainwashing in a dingy basement, women who will become handmaids all siting forward and watching a slide presentation that explains the rational behind their movement: a plague of infertility brought about by pollution and then exacerbated by the arrogance of birth control used by “dirty women.”

Offred’s classmates include an old friend of hers from college, Moira (Samira Wiley), with whom she exchanges a terrified glance and late-night conversations between cots, and an outspoken girl who serves as the Rachel and Leah Center’s cautionary tale: a “fuck you” yields an electric shock prong to the neck, and then a medieval punishment, if we weren’t certain yet how brutal this system is: “If my right eye offends thee, pluck it out.”

That woman later becomes the center of the two most terrifying moments in the entire episode. First, in the education center: she describes getting gang raped, and the “Aunt” leading the class asks her whose fault it was. She murmurs that she doesn’t know. The Aunt continues, with the logic of only today’s most horrible Twitter trolls: you were leading them on, it was your fault. The rest of the circle of girls point and repeat in a sinister chant: “Her fault. Her fault. Her fault.” The look on Moira’s face communicates everything we need to know about complicity: just play along, or you’ll make things far worse for yourself.

The second moment with the one-eyed woman comes back in “present day” during an outdoor ceremony in which the handmaids are all gathered in militaristic order The one-eyed woman, pregnant herself and preening, snaps at the chance to whisper to Offred that Moira was dead, sent to the colonies. And then the assembly begins: the women listen as the Aunt brings a man onto the stage and says he’s been convicted of rape. And worse—it was the rape of a pregnant woman, and the baby died. What follows is a scene out of The Lottery, but the women are spared even the dignity of stones to throw. The man is led into the center of a circle of handmaids, who had delicately removed their blinders, and then, like animals, they tear him apart. We don’t have Moira anymore to give us a glance to let us know if this is a case of eat or be eaten, or if the women truly relish this chance to rip a man limb from limb, perhaps the only chance they get to externalize their rage at every man who has turned them into nothing more than objects for breeding.

But we get to see the one-eyed woman, the only handmaid abstaining, presumably due to her delicate position. She is gleeful, face towards the sun, gloating with a hand on her belly. She has been beaten, electric shocked, had an eye gauged from her head, but now she has succeeded within the system. The placid joy on her face is the look of every woman with internalized misogyny, the woman who has starved herself and had syringes in her face and teetered in high heels and forgets the humiliations of being a woman because she is pretty and successful in whatever ways the world has told her is correct and so she can feel superior to the women around her.

The other ceremony we see in this episode is only slightly less violent. The Commander knocks, and enters a room. Offred and Mrs. Waterford are already there, silent and waiting. Tinny music plays and he does a biblical reading, a painting of a bucolic scene framed in the shot behind his head. The order and domesticity of it all is meant to mask the brutality, perfume over decay. The camera stays on Offred’s face during the ceremony’s main event, cold eyes blinking and impassive, staring at the ceiling while she jerks to the horrible rhythm of the Commander—all but fully clothed—between her legs. Offred’s head is on Mrs. Waterford’s lap. Her legs are spread, and she makes eye contact with her husband, looking miserable. All three are desperate to get it over with.

The episode ends by offering us two tiny moments of hope: the revelation that Ofglen is not, as previously thought, a pious little shit, but a former lesbian professor, a radical forced, like Offred into pretend piety because you never know who might be a spy. The two get to share their backstories in whispers as they walk along the river, peering out from beneath their blinders, and for a moment feel less alone. But these women are alone; the system has built itself up around them impenetrably, and taken away their bodies, their freedom, and their identities. Which is why the episode’s ending has such power: even as she’s become a red-cloaked pawn of the totalitarian system, forced to murder men or to allow them to impregnate her as the state chooses, she is still a person. Her name is June. 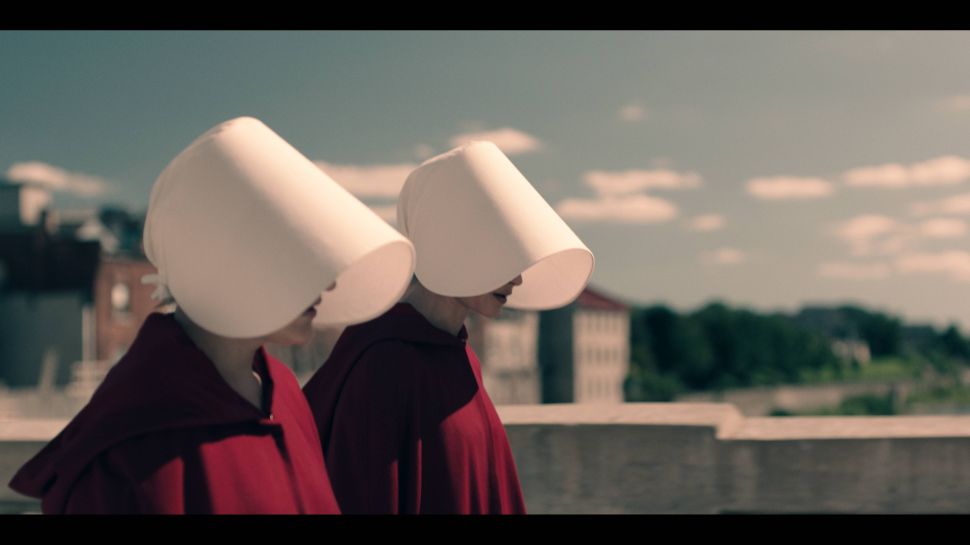