After deliberating since October 2016, a federal court in Fort Lauderdale, Fla., has recently issued an order for appearance to the lawyers representing the DNC and former DNC Chair Debbie Wasserman Schultz and the plaintiffs representing Bernie Sanders supporters, Jared Beck and Elizabeth Lee Beck. The hearing is set for 1:30 p.m. on April 25, when the judge is expected to announce the court’s decision in response to the DNC’s motion to dismiss the lawsuit.

The lawsuit was initially filed in June 2016 in response to the mounting evidence that Wasserman Schultz used the DNC to tip the scales in Hillary Clinton’s favor during the Democratic primaries. Wasserman Schultz and her staff overtly violated article four, section 5 of the DNC Charter, which stipulates, “The Chairperson shall exercise impartiality and evenhandedness between the Presidential candidates and campaigns. The Chairperson shall be responsible for ensuring that the national officers and staff of the Democratic National Committee maintain impartiality and evenhandedness during the Democratic Party Presidential nominating process.”

During the Democratic primaries, Wasserman Schultz, a co-chair for Clinton’s 2008 campaign, continuously pushed back against Sanders’ candidacy and his supporters. Under fire for her decision to drastically reduce the debate schedule, Wasserman Schultz disinvited former DNC Vice Chair Tulsi Gabbard to the first Democratic primary debate and insisted that the debate schedule was fine the way it was. Wasserman Schultz invoked criticism again after a DNC contractor accidentally shut down a firewall on DNC servers, making Clinton campaign and Sanders campaign voter files accessible to one another. The Sanders campaign fired a staffer for breaching the firewall, but Wasserman Schultz retaliated against the Sanders campaign by shutting down their access to the server, halting their campaign indefinitely until immense backlash led her to rescind her decision.

In several interviews during the Democratic primaries, Wasserman Schultz had trouble masking her contempt for Sanders supporters. In a January 2016 interview with New York Times Magazine, in response to a question about whether she thought there was a generational divide in excitement for Clinton, she said, “Here’s what I see: a complacency among the generation of young women whose entire lives have been lived after Roe v. Wade was decided.”

In a February 2016 interview with CNN, Wasserman Schultz defended the corrupt system of superdelegates, which the Democratic Party used to signal to their support base that Clinton would be the nominee. “Unpledged delegates exist really to make sure that party leaders and elected officials don’t have to be in a position where they are running against grassroots activists,” she said. That same month, news broke that Wasserman Schultz quietly rescinded Obama’s 2008 ban on donations to the DNC from corporate lobbyists and PACs.

Toward the end of the Democratic primaries, Sanders supporters openly protested the Nevada Democratic Party Convention. Their outrage was incited by State Party Chair Roberta Lange, who authoritatively changed the party rules to ensure the Clinton campaign went to the national convention with more delegates, after several of the allocated delegates didn’t show up—a testament to the enthusiasm gap that contributed to Clinton’s loss in the general election. Wasserman Schultz used the nationally reported Nevada Convention to attack Sanders supporters, spreading a falsehood that they were throwing chairs. Wasserman Schultz never apologized or rescinded her comments.

Sanders supporters’ suspicion that the Democratic primaries were rigged in favor of Clinton was confirmed by Clinton campaign Manager John Podesta’s hacked emails, which were exposed after the primaries ended.

So far in court, the DNC’s lawyers haven’t refuted that the primaries were rigged, but in their motion to dismiss, they argued that some Sanders supporters cited in the class action lawsuit posted on social media during the primaries that the Democratic Party was favoring Clinton. The lawyers have also argued that neutrality is just a political promise that the DNC should not be bound to keeping.

Whether the lawsuit moves forward or not, its process through court has vindicated Sanders supporters, who the Democratic establishment still attacks and scolds.

Update: “We’re pleased with how the hearing went—it lasted for the entire afternoon and Judge Zloch asked pointed questions of both sides,” Jared Beck, one of the attorneys representing Bernie Sanders supporters, told the Observer. “He did not rule from the bench and will be issuing a written order.” Beck noted that they did not have a time frame as to when they should expect that order to be issued.

A sign was hung by Sanders supporters outside the courthouse for the duration of the hearing depicting an image of former DNC Chair Debbie Wasserman Schultz with “Corrupt” in bold and all caps across the banner. 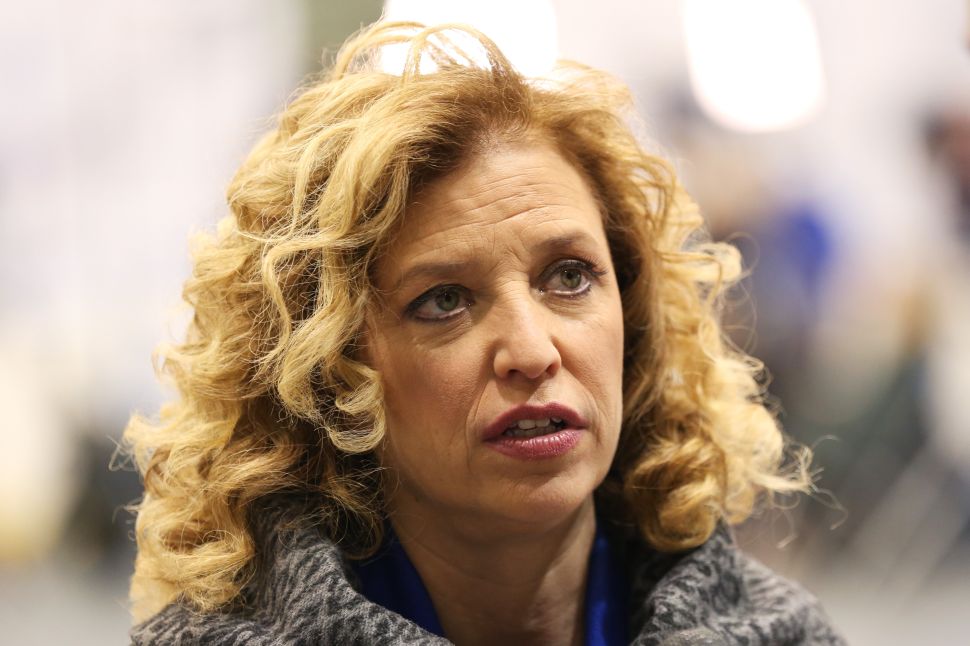