Move over Mars, you may no longer be the best place to find life beyond Earth. NASA and scientists around the globe have spent decades trying to answer a question that’s plagued humanity for centuries: “Are we alone?” So far, the answer remains elusive.

There’s a lot of focus on Mars, and for good reason: It’s nearby, and we know a great deal about the planet and its surface. However, a new discovery by the Cassini spacecraft indicates there may be other places in the solar system that are more life-friendly—specifically ocean worlds like Enceladus and Europa.

Twenty years ago, a lone explorer set off on a mission to explore the Saturnian system. Over the past decade, the Cassini spacecraft has revealed some of Saturn’s secrets and delivered breath-taking views of the alien worlds that make up this system.

While Cassini’s camera has dazzled us with its epic views, the suite of onboard instruments have been busy collecting a treasure trove of data on Saturn and its many moons, ultimately revealing that a small, unobtrusive moon may be one of our best bets for finding life beyond Earth.
A mere 790 million miles from Earth, and nestled in the diffuse outer ring of Saturn, sits a pale, icy rock about as wide as the state of Arizona. At first glance, this icy snowball moon could easily be dismissed, especially when compared to the flash of Saturn’s other moons like Titan with its hazy atmosphere, or even Io with its constantly erupting volcanoes.

Beneath its frozen exterior, Enceladus harbors a complex, possibly life-sustaining ocean. A series of pale blue scars across the moon’s otherwise polished southern surface hints at the activity below. These “tiger stripes” are fissures or cracks in the ice, that allows subsurface material to leak into space. The material—ejected in the form of geyser-like plumes—is responsible for creating the diffuse outer ring of Saturn, known as the E-ring.

In October 2015, Cassini conducted a series of deep dives into the plumes to determine their composition in hopes of better understanding the ocean below. The intrepid explorer was specifically searching for the presence of certain molecules, such as molecular hydrogen. If detected, the presence of hydrogen indicates hydrothermal activity—similar to the activity we see on the ocean floor here on Earth—is taking place on the seafloor of Enceladus’s subsurface ocean. The amount of hydrogen detected by Cassini, would tell us how much activity is taking place.

During its dive through the plumes, Cassini’s Ion and Neutral Mass Spectrometer (INMS) sniffed the gases present and detected a significant amount of hydrogen in the plumes, so much that something must be producing it. In a paper published today in the journal Science, a team led by Hunter Waite of the Southwest Research Institute in Texas, concluded that the hydrogen was a result of hydrothermal processes taking place on the Enceladus’s seafloor.

“This is the closest we’ve come, so far, to identifying a place with some of the ingredients needed for a habitable environment,” said Thomas Zurbuchen, associate administrator for NASA’s Science Mission Directorate at Headquarters in Washington said during a news conference. “These results demonstrate the interconnected nature of NASA’s science missions that are getting us closer to answering whether we are indeed alone or not.”

To understand what this discovery means, we need to take a look at the oceans here on Earth. Many astrobiologists postulate that the first life on Earth could have originated in hydrothermal vents as incredibly interesting chemistry happens when superheated interacts with the rocks on the ocean’s floor.

The discovery of hydrogen in the plumes opens a window into the inner workings of this icy moon. By examining processes that occur here on Earth, we can estimate what Enceladus’s ocean and other oceans of the solar system might be like. In the darker, frigid regions of outer space photosynthesis is not going to be the main energy source as it is here on Earth. However, if we turn our gaze to the deepest parts of the oceans, we discover ecosystems that thrive on chemical energy from hydrothermal activity. This could be what’s happening on Enceladus.

“Confirmation that the chemical energy for life exists within the ocean of a small moon of Saturn is an important milestone in our search for habitable worlds beyond Earth,” Linda Spilker, Cassini project scientist at NASA’s Jet Propulsion Laboratory in Pasadena, California, explained during a press briefing.

It’s important to note that there are geological explanations for the presence of these three molecules, but a more interesting theory is that methane on Enceladus is being produced via a process called methanogenesis, where organisms convert carbon dioxide and hydrogen into methane.

We could be seeing evidence of a food source that would sustain potential alien microbes, and for the first time, scientists have been able to measure the calorie count in this potential food source. “It’s roughly equal to eating 300 pizzas per hour,” explained Chris Glein of the INMS team at the Southwest Research Institute.

This is big news in the search for life. Life, at least as we know it, has specific needs. , energy, and organic molecules must be present, but that’s not all. Life has to have time in order to evolve. We now know that Enceladus has in the form of an ocean, has energy from hydrothermal activity, and has organic molecules. That said, NASA has not found life, nor evidence for life,  on Enceladus. The team’s discovery, though, bodes well for Enceladus’s habitability.

Cassini was never designed to look for life directly and has reached the limit for what it can detect. It’s up to future missions to actually search for life. “Although we can’t detect life, we’ve found that there’s a food source for it. It would be like a candy store for microbes,” Waite explained.

In a second paper published this week in the Astrophysical Journal, William Sparks of the Space Telescope Science Institute in Baltimore, explains that the Hubble Space Telescope has added more evidence to support the claim that Europa has plumes similar to those spotted on Enceladus.

“The plumes on Enceladus are associated with hotter regions, so after Hubble imaged this new plume-like feature on Europa, we looked at that location on the Galileo thermal map. We discovered that Europa’s plume candidate is sitting right on the thermal anomaly,” said Sparks.

If the plumes and the warm spot are linked, it could mean that vented from beneath the moon’s icy crust is warming the surrounding surface. NASA is preparing to explore Europa in the 2020’s and the new findings make it all the more intriguing.

The Europa Clipper spacecraft is currently in the works and will be outfitted with the next generation INMS instrument designed to search for more plume evidence on Europa. “If there are plumes on Europa, as we now strongly suspect, with the Europa Clipper we will be ready for them,” explained Jim Green, Director of Planetary Science, at NASA Headquarters. 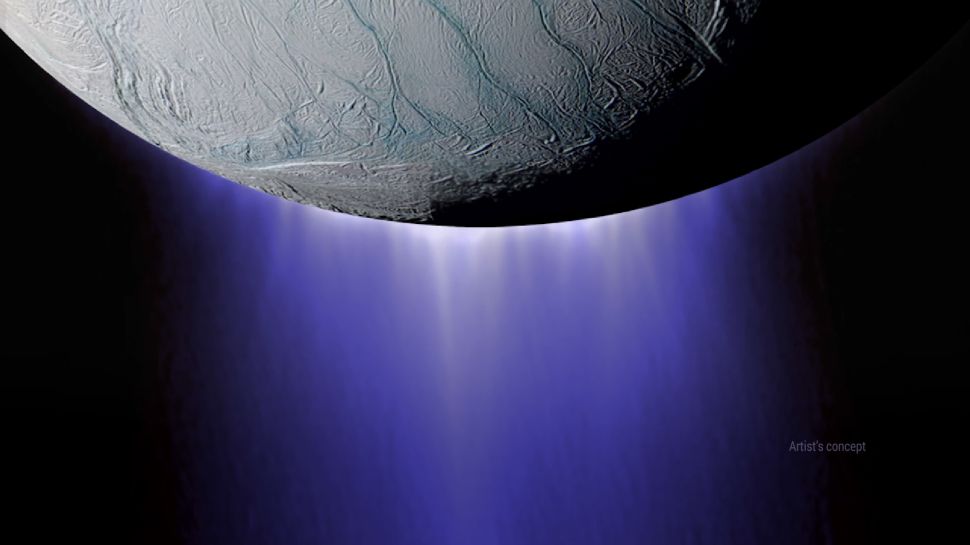