The ex-secretary of state’s appearance onstage in the atrium of LaGuardia Community College in Long Island City triggered an uproar of applause and sporadic cheers and chants of “Hillary!” It also provided an interesting bookend for Cuomo’s “Excelsior Scholarship” initiative, which he proposed in January alongside Vermont Sen. Bernie Sanders, Clinton’s rival for the 2016 Democratic nomination—and which the governor signed into law today, in a possible prelude to his own White House bid.

In her speech, Clinton invoked the late Mayor Fiorello LaGuardia, the liberal Republican for whom the school was named, and Queens’s reputation as a magnet for global immigration.

“He is smiling down today, because this is exactly the image progressive leadership believes in and delivers on,” she said. “Queens is a place where people grow up, where they immigrate to, where they chase their dream, raise their families, make their contributions. It is an example of what we believe is best about New York and best about America.”

That was far from the only oblique dig at Trump and his policies. Clinton contrasted the public expenditure on higher education with the GOP commander-in-chief’s multibillion-dollar plan to construct a barrier along the Mexican border.

More than anything, though, she praised the concept of the Excelsior Scholarship, which will pay for the tuition—though not room, books or board—of undergraduate students enrolled full-time at State University of New York and City University of New York colleges. To be eligible this fall, students must come from households earning no more than $100,000 a year.

Free universal college tuition was one of Sanders’ signature issues on the campaign trail, and one Clinton expressed skepticism toward during the primary, as she argued it would lead to taxpayers subsidizing wealthy students. But she later endorsed a plan similar to Cuomo’s—which she referred to today as “a series of steps that we could take together.

“Now, because of the outcome, a lot of the work will have to be done at the state and local level,” Clinton said. “And I am so grateful to my friend and our governor for taking this idea and not just talking about it, but actually making it happen for the young men and women of our state.”

The program obligates students to have resided in New York for at least one year, and to remain in the state for as many years as they spent in college.

“I want every young person in the United States to understand: you move to New York, you make your commitment in New York, you can get an affordable college education,” the former New York senator said, alluding vaguely to the state’s population loss particularly outside the five boroughs. “All over the state, not just New York City.” 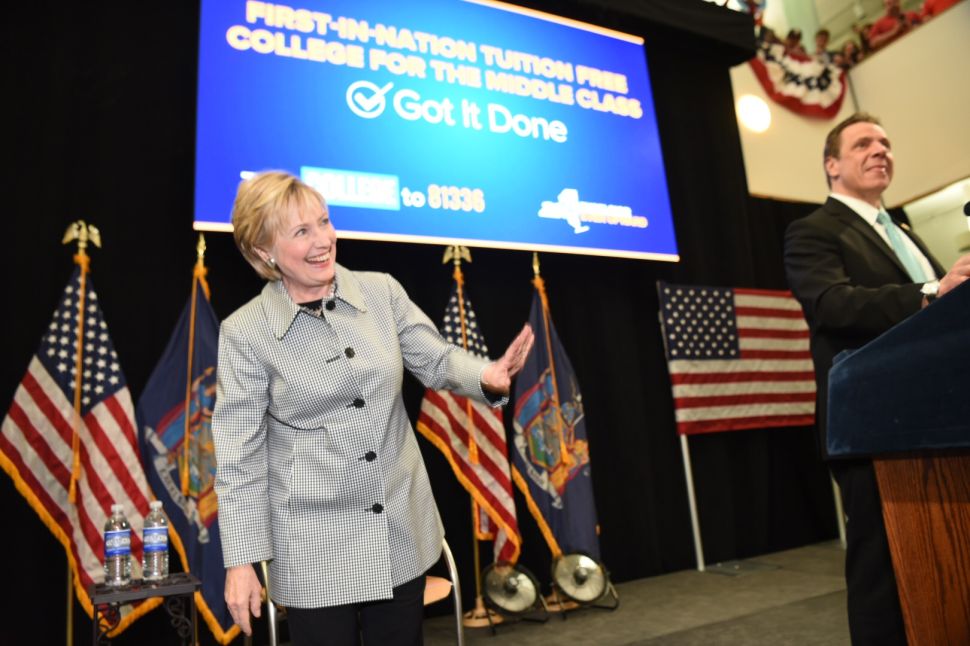