When the hell is Madame President Elect Elizabeth Keane going to be inaugurated? She’s been walking around with this Daenerys Targaryen level amount of words in her title for this entire season, preparing to take office.  I feel like the events of a season of Homeland apparently take place in a very short amount of time, meaning that in the show’s universe, a couple months out of the year are completely bananas and then the rest of the year is very humdrum. That must be exhausting. The penultimate episode of this season is not exhausting, however. Homeland does this thing sometimes where the climax of a season lands in the second to last episode and then the finale is more of an epilogue. I was half expecting that to be the case this week, what with Dar Adal seemingly conjured as this year’s big bad and Peter Quinn foreshadowing his own death every time he opens the half of his mouth that he can still open, but things in “R For Romeo” only get more murky which means we can expect a flashy finale next week.

We open on a fizzly resolution to last week’s cliffhanger. Carrie tells Quinn not to kill the man from across the street and he replies that he wasn’t planning on it yet. He just wanted to show her that he found Sekou’s van in the garage, damning evidence. She wants to inform George Pallis and bring down the whole conspiracy, but he just wants to kill the guy and get revenge for Astrid. Carrie can’t fathom how far off into the sewer Quinn’s mind is by this point and he can’t explain it. They have a pretty good fight about whether or not Carrie is responsible for his schismed mental state (she kind of woke him up out of a coma for information) which culminates in Peter accusing her of making him “into a monkey” while doing a whole monkey act out with the howling and everything. I have to applaud Rupert Friend for his performance as Peter Quinn this year. I feel like playing a character with mental health issues is walking a razor thin line where at any point you could fall off and look ridiculous or condescending to the part or just take the viewer out of it with how weird it all is but I find deranged Quinn really likeable and tragic. This monkey thing flirts with the limitations of how much I buy this character’s behavior but it totally works. She comes around and admits something along the lines of  “ok, yeah I kind of sort of destroyed your brain, my bad,” and he takes off, leaving her the key to the house across the street.

In D.C., and in bizarro alternate presidential timeline world, Saul visits Keane who is attempting to hold a press conference debunking the viral fake news video of her dead son. The press, now totally rabid, asks her whether she’s going to resign and whether it’s true that her Secretary of Defense nominee is pulling out. She realizes she’s talking to room full of idiots and leaves the stage to talk to Saul, who fills her in about how the video causing her so much grief came from Brett O’Keefe’s misinformation office. At said office, Dar Adal meets with O’Keefe about Keane’s demand that whoever made the video come out and show themselves. Keane calls the video’s creator “deplorable,” an utterance by which O’Keefe is so deeply offended that he decides to accept her challenge. Dar advises against it but O’Keefe is apparently a wild card unswayable by even Dar’s psychic administration. Dar then interrogates Max about his phone video by using some kind of vulcan neck pinch on him, but Max demands a lawyer and is locked in the room.

There’s a lot to unpack here regarding the word “deplorable.” It is essentially unreasonable to deny that this line is a function of Homeland’s quasi commentary on real life politics, yet because most television is written months before it airs, this line lands strangely in April of 2017. Keane is supposed to represent Hillary Clinton, and O’Keefe is Alex Jones. She’s already elected president, so we’re in a completely fictional alternate timeline, and yet she’s at war with both the media and the intelligence community, much like our actual President Donald Trump. Somehow Homeland always manages to wash itself clean of having any partisan political views by mixing up reality into a gumbo of subtle references to the real government and serving it back to us. It’s amazing to me that a story about the CIA can be so apolitical but really, at the end of the day it is indeed just a show about who is going to get blown up that week (more on that later). Anyways Keane, after a rousing Saul Berenson monologue, decides to go on the show even though her staff warns against it.

Carrie breaks into the shady conspiracy house in what, upon a second viewing, is an all too easy process for a place that a bunch of black ops guys behind 9/11 part two are working in. Quinn broke in in the first place by pulling a space key out of the outdoor chimney like he’s a babysitter or something. We’re treated to some suspenseful action as she’s grabbed from behind by the man from across the street in a total jump scare moment and manages to fight him off by jamming a chopstick in his eye before he chases her down again. Quinn busts in the door and saves the day by finally getting to murder the hell out of the man he’s been stalking all season with the front and back of a gun. He probably shouldn’t have done that because the man likely held valuable information, but Quinn gonna Quinn.

Max is visited by a “men in black” Al Gore-looking figure who slips him a key card under the milk in his prison cafeteria lunch, and he uses it to get out of the building but then just gets black-vanned in the parking lot anyways. You would think after years of this stuff these people would be more careful around vans. He’s brought to Dar who informs him that he’s figured out O’Keefe is running a phony social media presence posing as Peter Quinn. He asks Max to hack into O’Keefe’s computer and the two discover that the purpose of the project seems to be making Quinn look like a deranged lunatic who’s obsessed with Keane.

Keane’s appearance on O’Keefe’s show does not go well. She brings the truth, entirely exposes his organization and is still steamrolled by his judo-like mastery of spin, punditry and propaganda. She even exposes his ties to the CIA but his audience doesn’t appear to sway. It’s a strange scene to watch depicted in dramatic television because it’s just such a brand new cultural concept being picked apart that it still feels surreal even depicted in fiction. Fake news as a theme, for whatever reason, feels strange on screen. Keane and Saul listen to the show in a sullen and tense car ride back to the White House through a mob of protestors, one of which throws himself in at the vehicle.

This episode’s plot rounds out by creating a fine mess to be resolved in next week’s finale . Everything seems wrapped up in a neat package for Carrie as George Pallis arrives at the crime scene willing to grant Peter immunity and impressed by the finding of the original van, the smoking gun in the Sekou Bah case. Peter deciphers from the half erased marks on the blackboard that the men working in the house are possibly still on the east coast. Carrie tries to contact Keane with this information but she gets Rob, who says she can’t be bothered, because of the whole protester mosh pit situation, but they’ve called some people in to quell the situation. This could be our black ops mercenaries, it’s unclear. Finally, when the bomb goes off, I understand why the house was so easy to break into. This is a trick of writing that only Homeland can pull off. I didn’t see it coming because I just assumed this was another case of some insane plot hole like a spy not using a cell phone password. The house was easy to break into because it was a trap. An FBI agent opens the garage door and triggers a bomb, blowing up the garage and throwing Carrie onto the lawn. While she’s passed out, Rob calls back and is completely oblivious as to why he’s getting her voicemail. Carrie wakes up and finds Quinn, somehow they both survived the blast but there are dead FBI agents everywhere. The van is probably blown to shrapnel, the man from across the street is still dead, and probably taking a bubble bath somewhere. 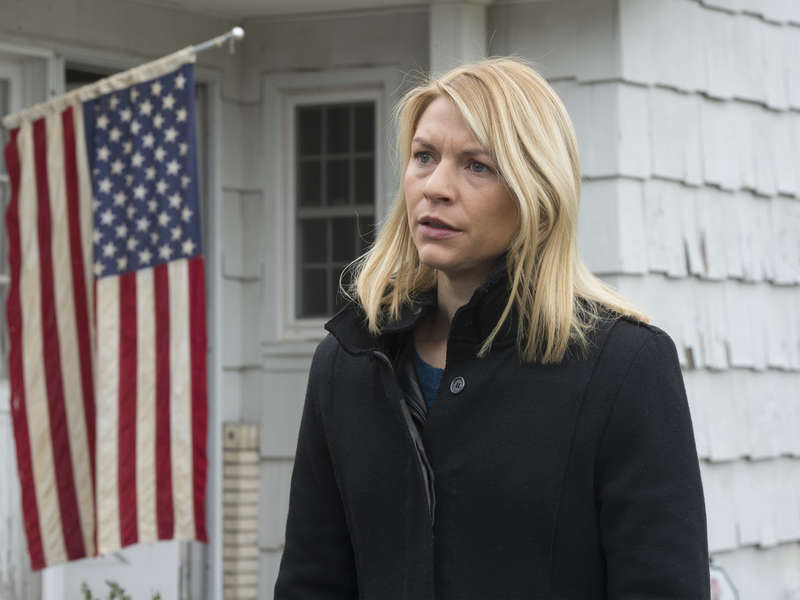