There is no escaping Ben Thompson’s aggregation theory in today’s world. Perhaps the world’s most sought-after technology analyst, Thompson, of Stratechery, first introduced the term in a July 2015 post. Aggregation theory describes how several of the most influential technology companies today came to dominate.

Before the internet, the kingmakers in any industry were the distributors. Connecting the makers of a good or service to consumers was highly complex, and hence a major source of profit. That’s where old-world distributors such as publishing houses, broadcast networks, and taxi companies got their power.

In the digital world, the distribution of goods and services is essentially free. Amazon, Google, Facebook, Uber, Netflix: They’re are all distributors. But because the internet makes it almost trivial for makers to connect with consumers, these companies are also the world’s best aggregators — the ones that suppliers have no choice but to work with. As of December, the 10 most valuable public consumer internet companies, which together represent over a trillion dollars in value, were all aggregators.

What made these specific companies rise above their competition boils down to one thing: user experience. As Thompson wrote in July 2015:

But what, exactly, makes for the best user experience? There’s nuance to it — the kind of nuance that can kill a company that fails to notice it. User experience is not just about having a beautiful app, or a high-functioning platform, or the biggest array of suppliers. In fact, the clash of two Indian startups — the now-multinational Zomato and a local rival — shows that the simple version of Thompson’s aggregation theory omits some very important details. The story of these two competitors isn’t just a regional tale. It speaks to any company interacting with the physical world, including startups like DoorDash or Postmates; it’s also pertinent to any of the e-commerce companies shaking up retail, like Jet.com.

Sometimes, it turns out, distribution still matters. A lot.

If you’ve lived in India or travelled across Asia, you’ve likely encountered Zomato. Since its launch in 2008, it has risen to become a premier restaurant search platform in some of the most world’s most populous cities: London, Melbourne, Dubai, Manila, Istanbul, and Jakarta. In 2015 it entered the US by acquiring Seattle-based UrbanSpoon (which it shut down later that year). Roughly equivalent to a combination of OpenTable and Yelp, it now rakes in more than 12o million monthly visits worldwide.

Zomato began by indexing menus from restaurants and making them easily searchable online. Having nailed that task, CEO Deepinder Goyal then made a master move. He started to transform Zomato into a network by encouraging users to check in, click photos, and review restaurants on the platform, morphing the menu aggregator into a service more like Yelp. Every customer that joined the site and left a review made the next customer’s experience better by pushing good restaurants to the top.

With users now self-reporting exactly what they liked, where they ate, and with whom they went out, Zomato could personalize the service even more. And because customers now had a public place to rate their experiences, restaurants had more incentive to provide better service, improving the entire network’s experience.

As it grabbed more eaters (customers), Zomato attracted more restaurants (suppliers). So far, so good—it was playing nicely by aggregation-theory rules. Having become the leading aggregator of restaurants, Zomato now set its sights on an even bigger market: food delivery.

That’s when things started to change.

In 2015 the company launched a new app, Zomato Order, for on-demand food delivery. Traffic from its main app fueled the new food ordering service, meaning that it cost Zomato nothing to acquire customers for its new app, giving it a huge advantage over its competition.

For restaurants, the service promised to bring lots of new orders and replace their antiquated phone-ordering systems. But Zomato Order depended on the restaurant’s own delivery fleet for about 90 percent of food orders, and third-party delivery partners for the remaining ones.

The period of 2014 to 2015 was a boom time for India’s food tech startups, which enjoyed a huge influx of venture capital totaling more than $300 million. Most competitors offered discounts to lure new users, burning through their cash reserves. But not Zomato Order, which, powered by traffic from the mothership, didn’t have to slash prices. It wasn’t long before every discount-led food-tech player in India fell by the wayside.

Here’s where things get interesting. In spite of the powerful network effects of aggregation theory—in spite of locking up two ends of the marketplace (restaurants and hungry people) — Zomato Order is today second in overall volume of orders to the real winner: Swiggy.

Swiggy started in late 2014, initially offering services in one neighborhood — Koramangala, India’s startup hub in Bengaluru. Where Zomato got off the ground after founder Goyal noticed the need for menus among people ordering take-out, Swiggy founder Sriharsha Majety tackled food ordering from an entirely different angle, by thinking of it as a hyperlocal delivery problem.

The reason Zomato’s enormous lead in restaurants and customers didn’t translate into automatic dominance in food delivery is simple: The supply side is never a problem in the food world. Any aggregator that promises restaurants additional orders is a no-brainer for a business that has high fixed costs and low variable costs, as every additional order goes straight to the restaurant’s bottom line. The real challenge lies in attracting customers. To get more users onto your platform, your only option is to offer a better user experience than your competitor.

If you’re in the internet business, it’s easy to assume that a better user experience boils down to a better user interface. But for food delivery, just like for any other transaction business, the look and feel of an app — where Zomato Order vastly outshines its competitors — is in fact superficial. What customers really care about are faster delivery and lower prices.

A November 2016 McKinsey report looked at food-delivery markets in 16 countries over 6 months, and concluded that with the selection of restaurants and pricing being equal, delivery times have the highest impact on user experience in food delivery. As Domino’s Pizza CEO J. Patrick Doyle put it, Domino’s had to understand that it was not in the pizza-making business, but rather in the pizza-delivery business, in order to turn a profit.

By offering faster delivery than Zomato, Swiggy grew rapidly via word of mouth. It attracted new users, which drew in more restaurants, which spurred yet more transactions. The workers doing the deliveries (who are paid mostly based on the number of deliveries) got assigned more jobs, which increased their earnings. And Swiggy could hire more drivers, improving customer wait times even more. The network effect was alive and well.

Historically, the delivery business has been seen as a money loser, lacking the clean efficiencies of a purely digital business. But as Jeff Bezos illustrated with Amazon’s operations strategy, letting your business initially lose money on fulfillment can lead to efficiencies down the road. A growing customer base draws in more suppliers and spurs more transactions, making the network denser and more profitable over time.

That’s the thing about network effects — they work against you until you reach a tipping point; then, they work for you. And often to devastating effect for the competition.

The Zomato-Swiggy war has much in common with the battle Amazon waged more than a decade ago against eBay. As Brad Stone wrote in The Everything Store: Jeff Bezos and the Age of Amazon, controlling distribution let Amazon shrink delivery times from an industry average of 12 hours to a mere 4 hours:

[Now co-CEO Jeff] Wilke’s gradual success in making the logistics network more efficient would offer Amazon innumerable advantages in the years ahead. Tightly controlling distribution allowed the company to optimize deliveries and make specific promises to customers on when to expect their purchases to arrive, giving it a competitive edge over rivals, especially eBay, which had avoided this part of the business altogether.

For Swiggy, the data it has gathered on past deliveries allows it to sharpen its delivery estimates and keep optimizing routes, driving down the cost of getting food to your door. That translates into an even better user experience — such as offering orders with no minimum (which it already does) and charging lower delivery fees than what any individual restaurant can afford.

UI/UX isn't defensible. But networks are.

One might argue that there’s room for both Swiggy and Zomato to dominate food delivery—but in practice, that’s not how it works. In undifferentiated experiences like food delivery, once customers sign up, they rarely leave for another platform, creating a strong winner-take-all dynamic. Thompson argues that in such markets, though suppliers are not exclusive in theory, they are exclusive in reality. He explains this clearly in the context of the ride-sharing market:

It doesn’t matter that drivers may work for both Uber and Lyft. If the majority of the ride requests are coming from Uber, they are going to be taking a significantly greater percentage of driver time, and every minute a driver spends on a rider job is a minute that driver is unavailable to the other service. Moreover, this monopolization of driver time accelerates as one platform becomes ever more popular with riders.

It’s no different for restaurants. Every minute a restaurant spends fulfilling a Swiggy order is a minute unavailable to a Zomato order. Zomato customers wait longer for their food as a result, making them more likely to jump to Swiggy.

In the near future, on-demand marketplaces like Swiggy, with its powerful customer base and nationwide delivery network, could spare emerging chefs the hassle and high upfront investment of launching a physical restaurant. This could open up a whole new market, drastically lowering the price of food via delivery versus food from a true restaurant. Entrepreneurial chefs could test new concepts on the cheap in standalone kitchens, with Swiggy acting as the discovery and distribution channel — a sort of app store for food.

There is no doubt that Zomato has built one of India’s most-loved consumer brands; it is also the clear winner in the dining out and nightlife categories. Yet Swiggy’s unexpected rise in food delivery adds a corollary to Thompson’s aggregation theory — one of the most important frameworks in tech today.

Success doesn’t automatically spring from owning the best interface between a supplier and a consumer, as is the case for most firms in the current era. For the growing number of startups involved in moving physical goods or services, owning and controlling distribution is absolutely a core competency—a vital part of the flywheel—and not just a commodity.

Disclosure: Both Swiggy and Zomato are customers of Freshdesk, the customer support software company where I currently work.

Abhishek Madhavan currently does marketing at Freshdesk, one of the world’s fastest growing enterprise startups. He was previously a product manager at Crowdfire, a consumer startup based in India. This article originally appeared on Backchannel. Follow Backchannel on Facebook and Twitter. 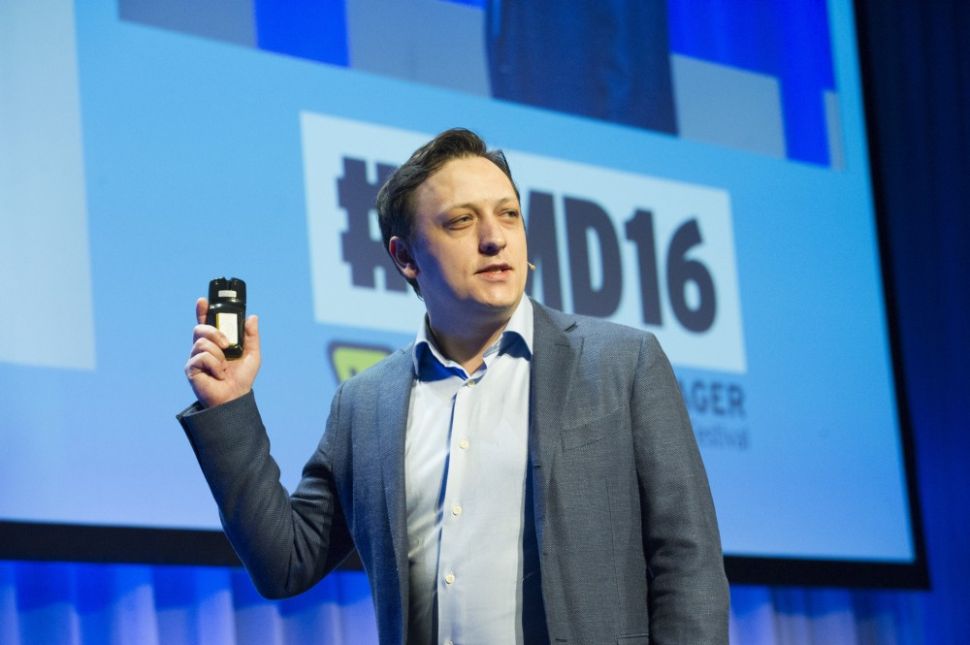