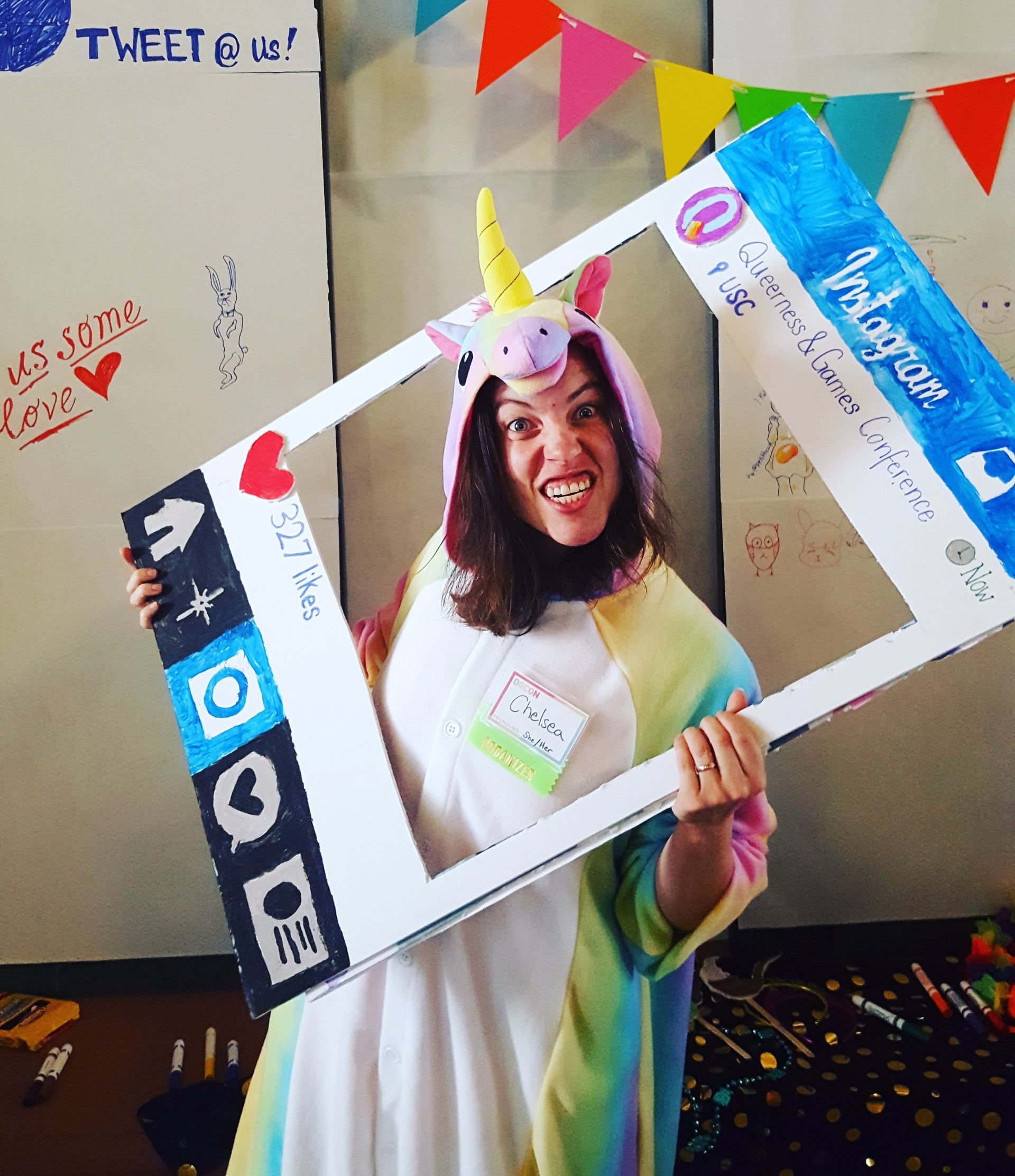 An attendee at the 2017 Queerness and Games Conference in Los Angeles, California.
Terran Pierola 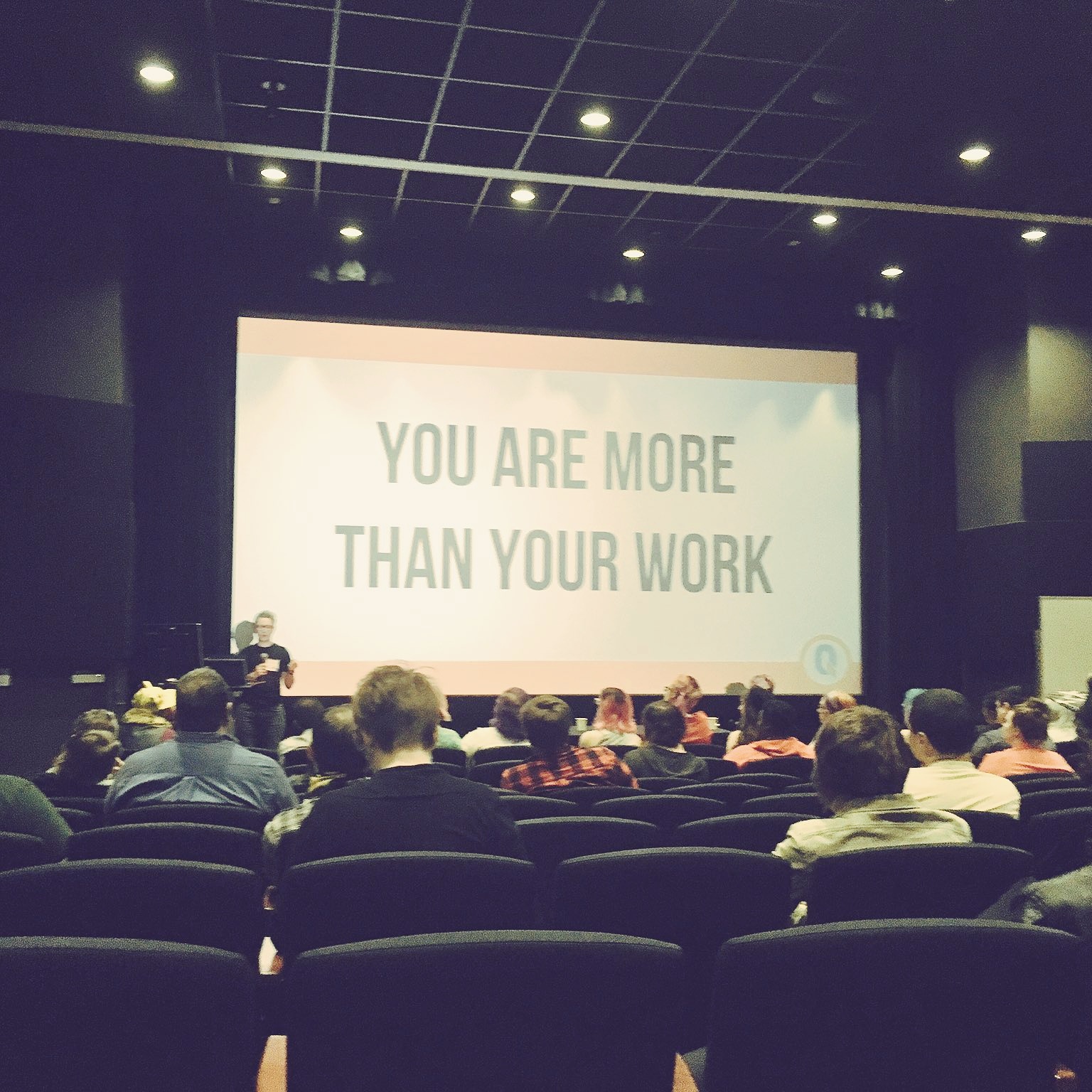 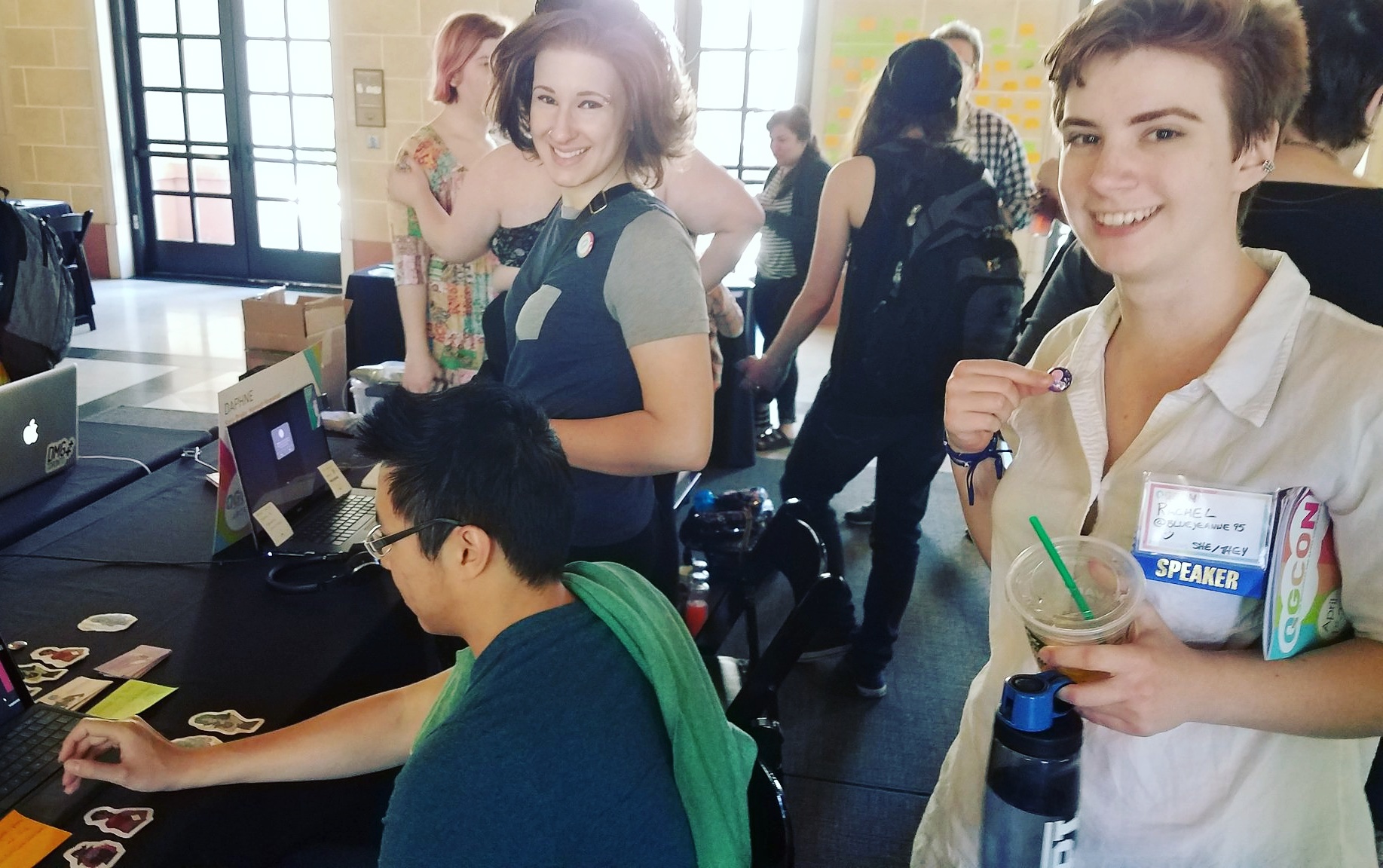 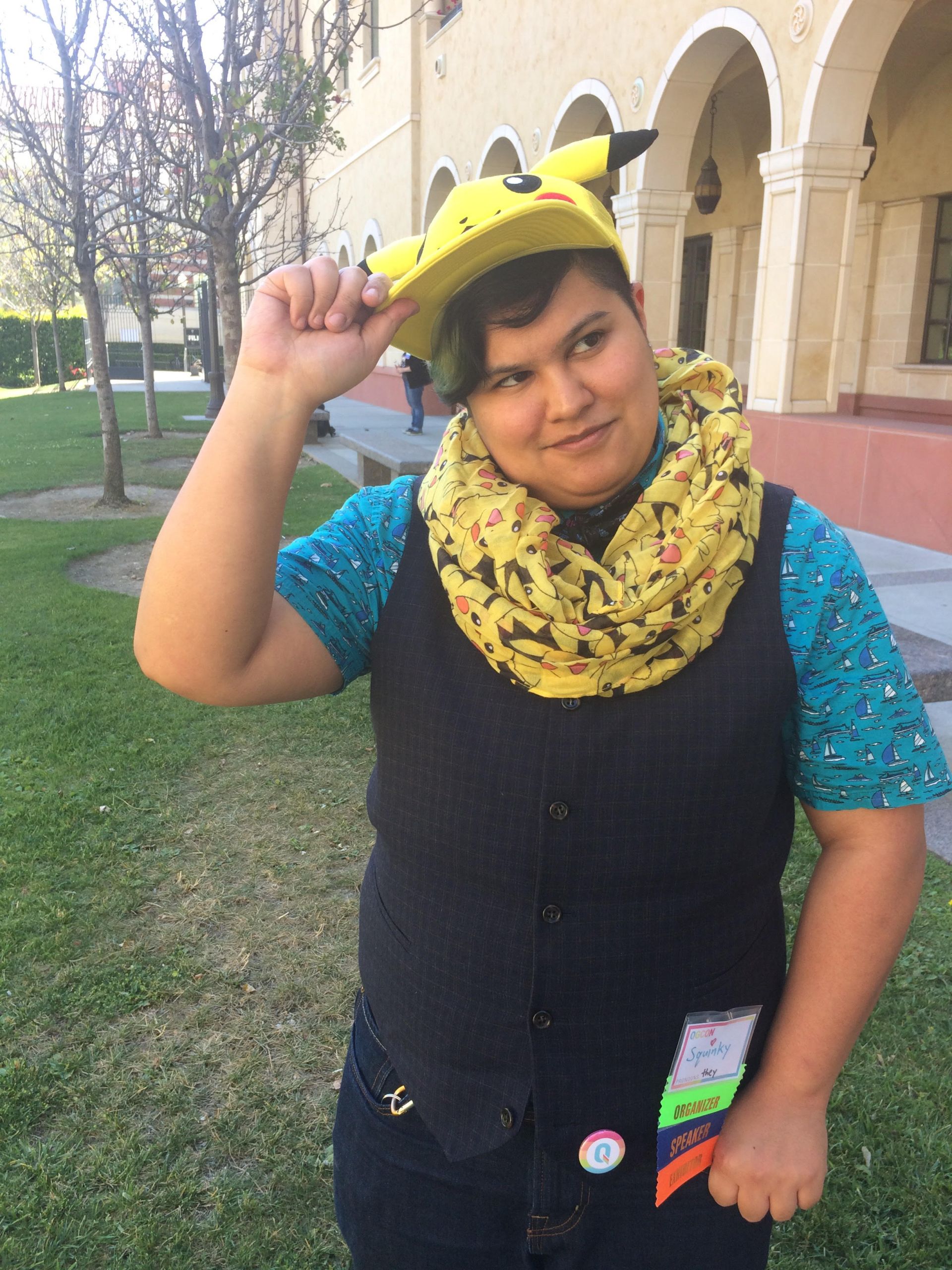 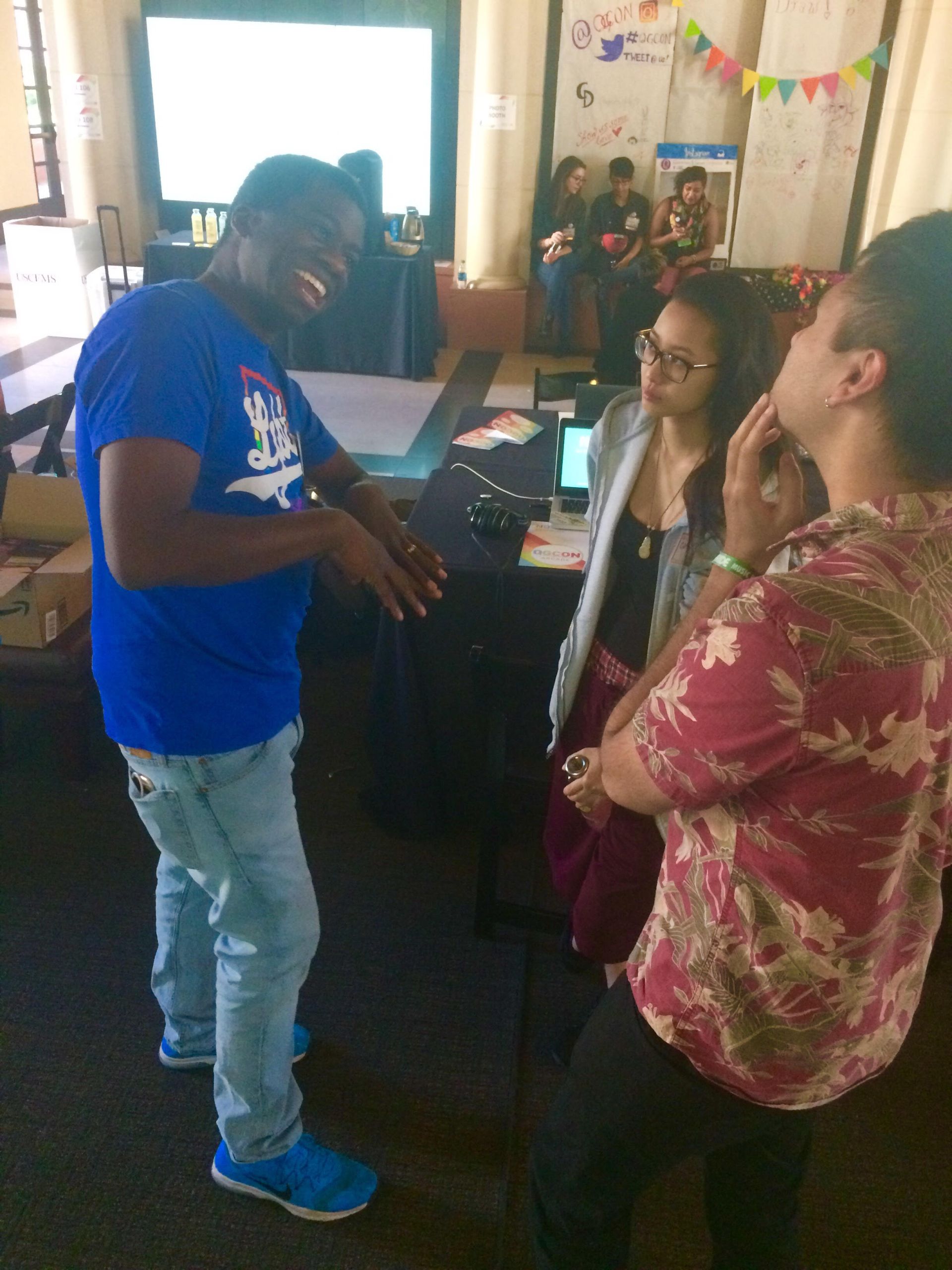 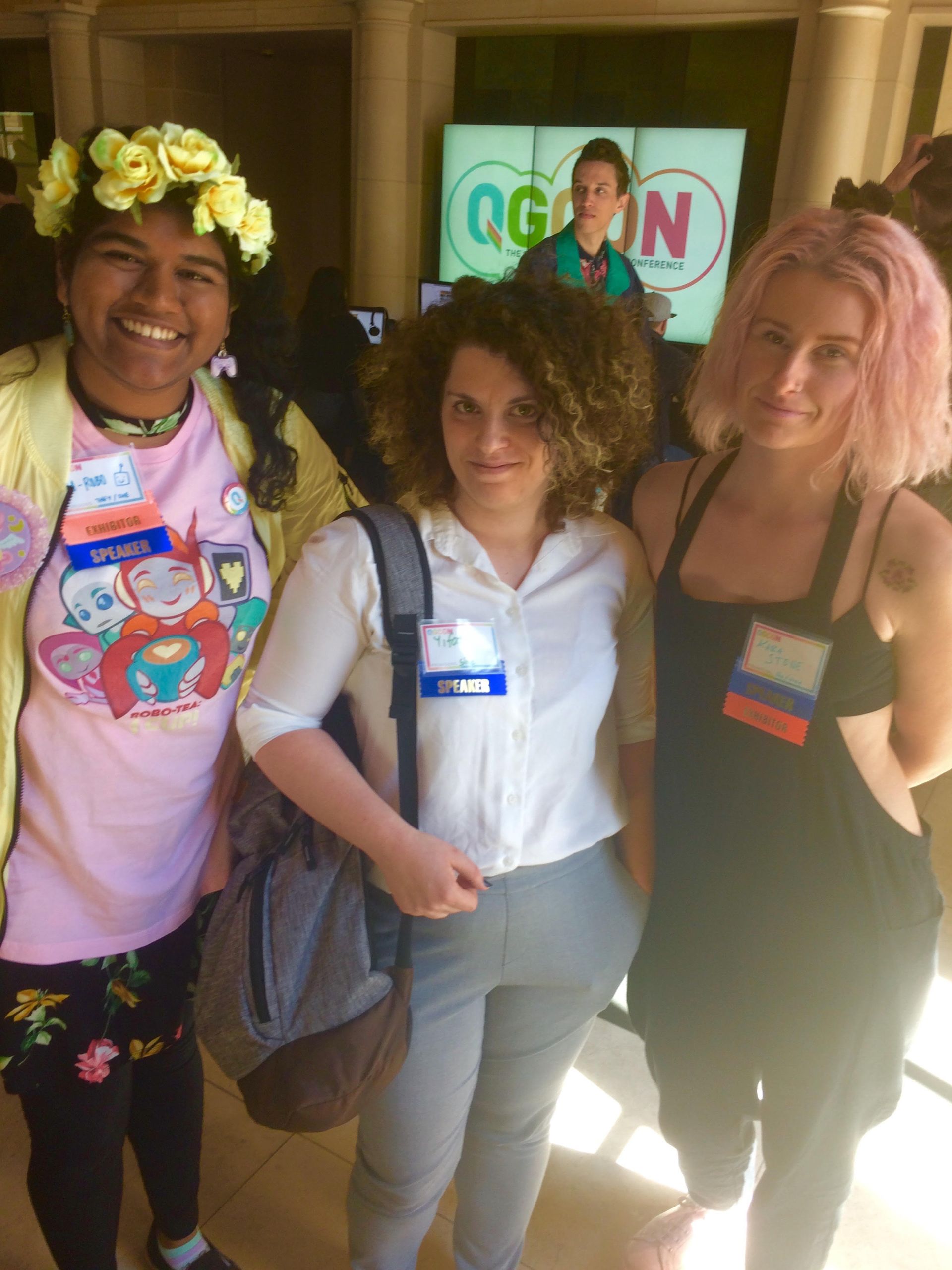 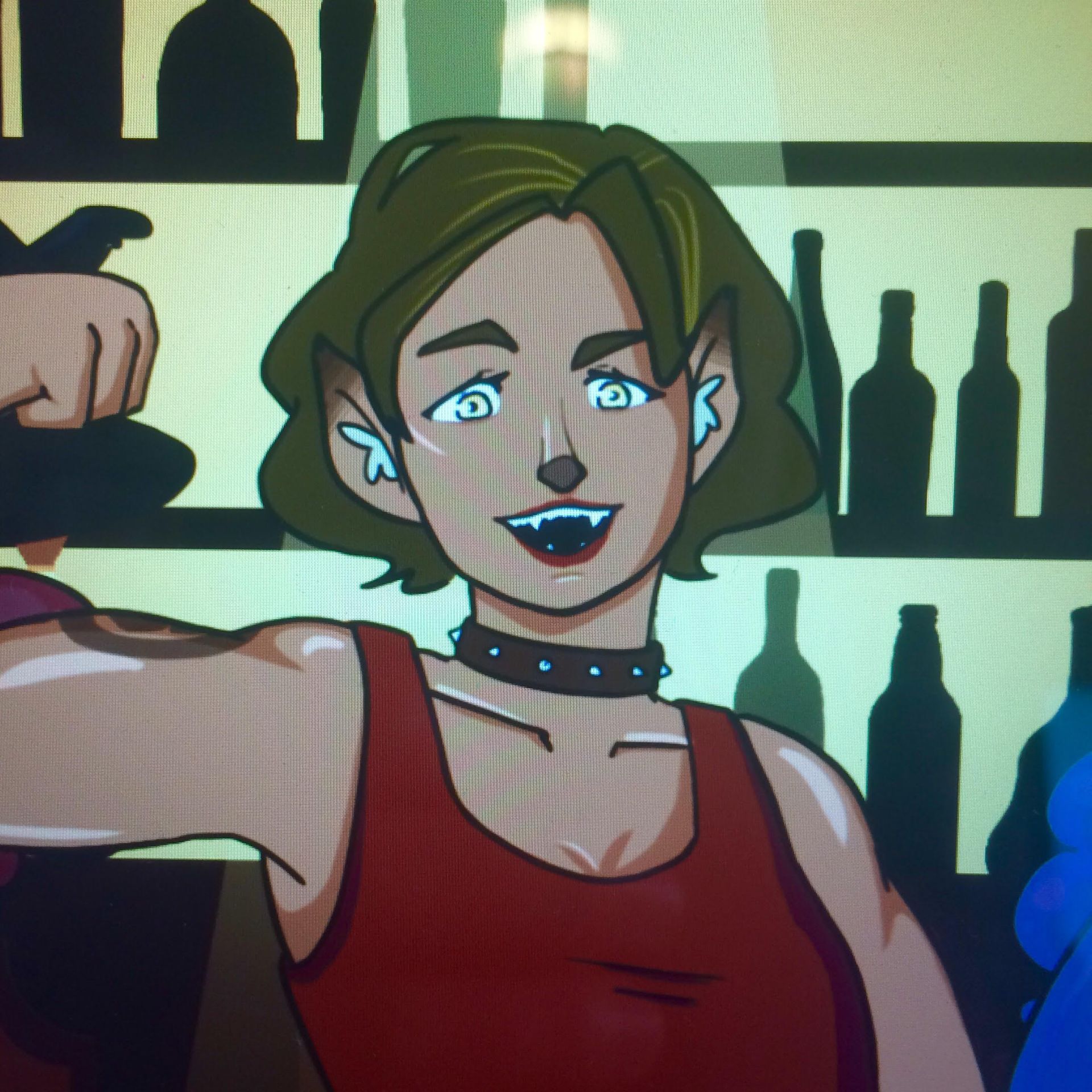 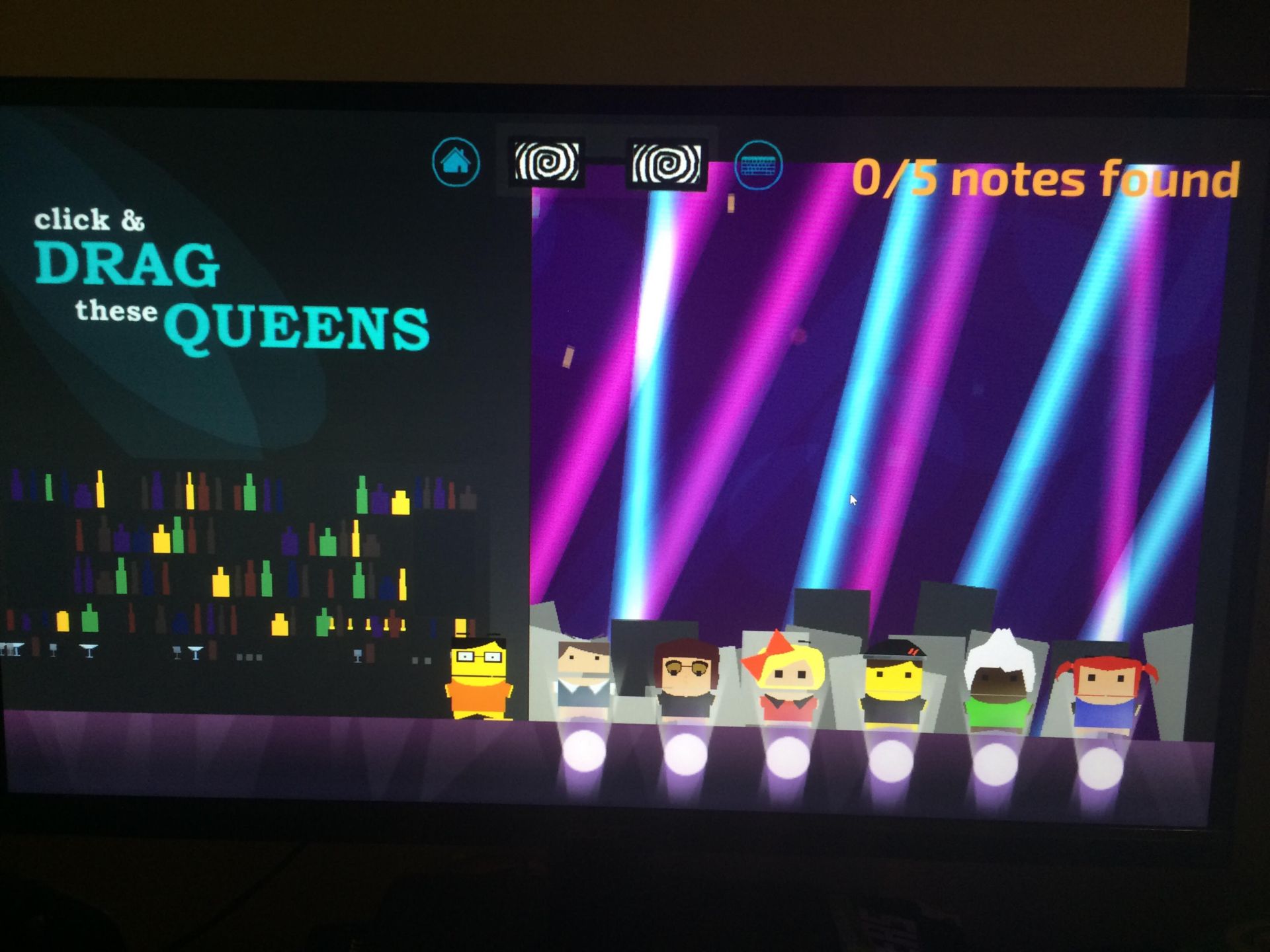 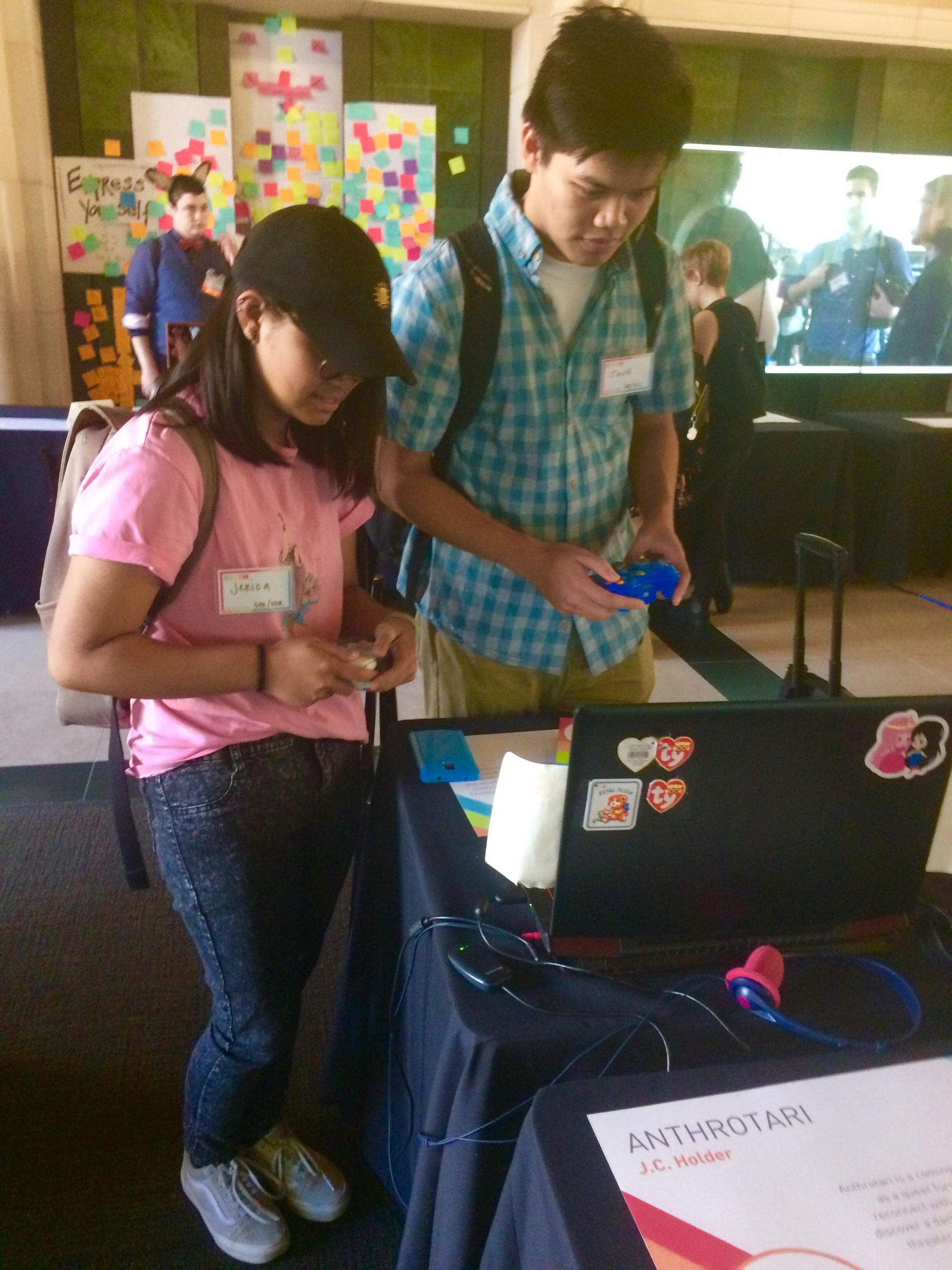 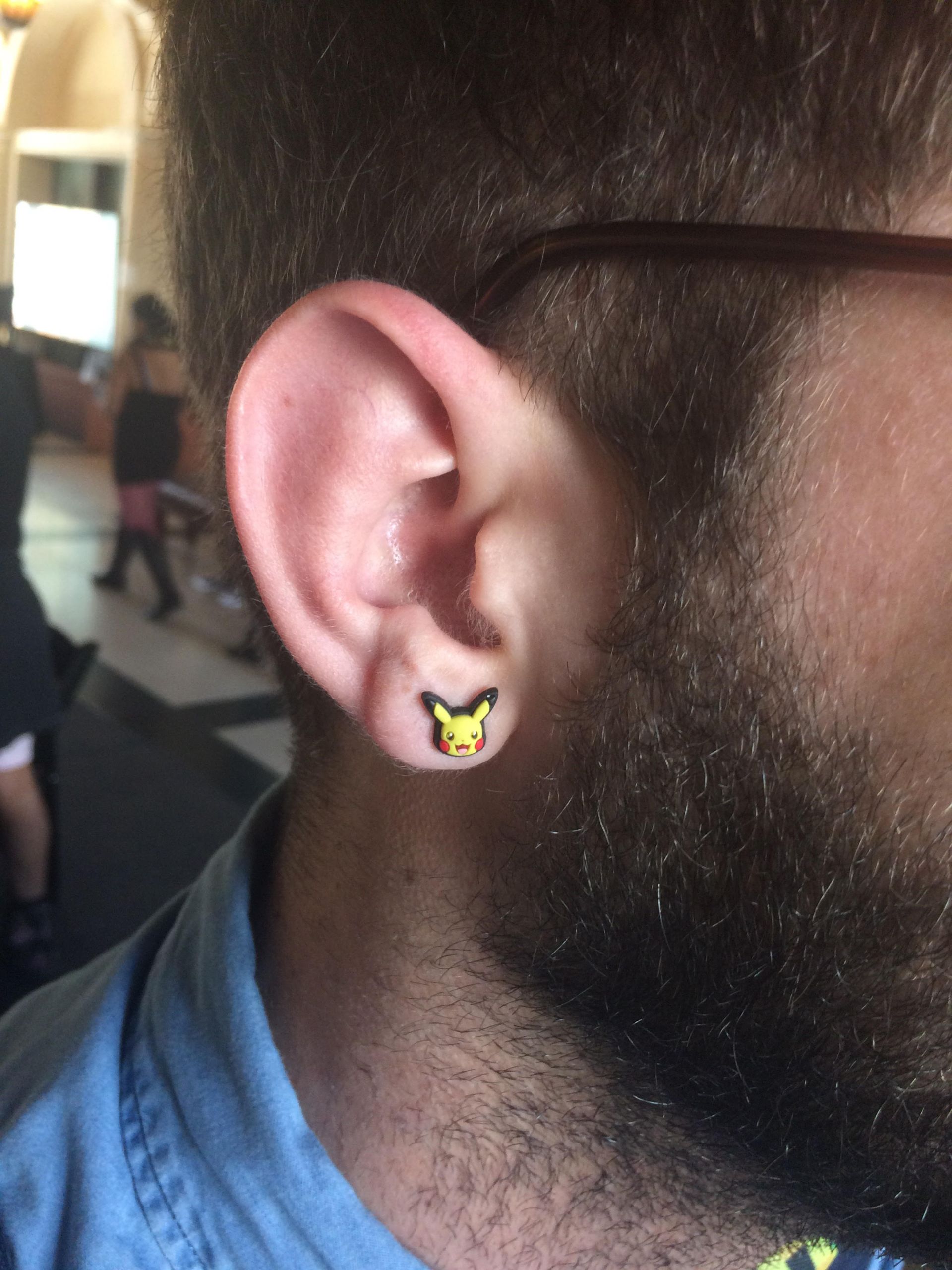 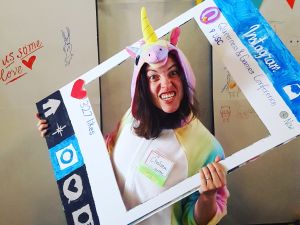 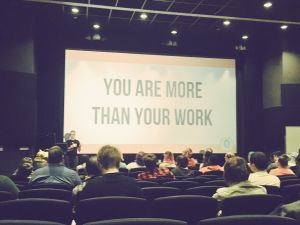 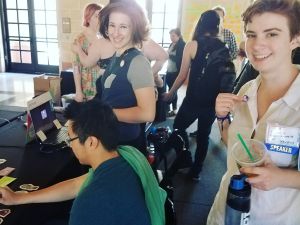 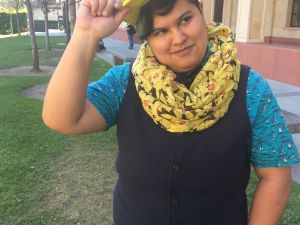 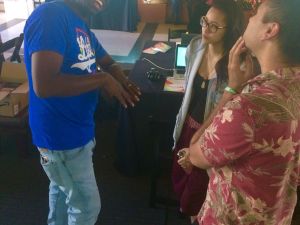 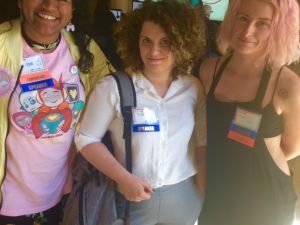 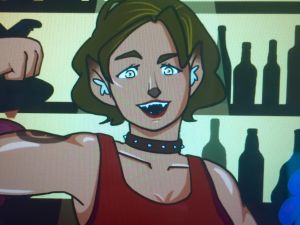 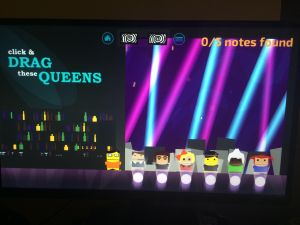 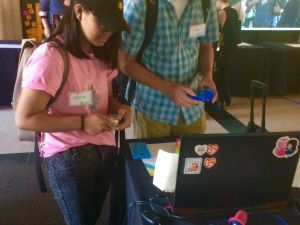 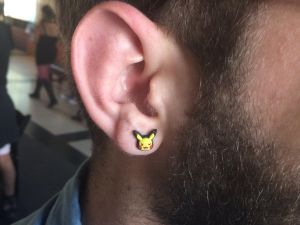 This year’s 2017 Queerness and Games Conference, which took place at the University of Southern California, was a con(ference) unlike any other. Underneath all the rainbow-colored hair and Pokemon apparel the kaleidoscopic crowd at QGcon got serious about games. From April 1-2, LGBT gaymers descended on the campus for a weekend of queer games and presentations from developers, academics, and critics all working in or around the queer game field.

Organizers kicked-off the weekend with the reading of an inclusivity statement to affirm their commitment “to creating and maintaining an inclusive and safe space for all participants.” Similar to the Con’s 2014 edition, which took place during the height of Gamergate, the 2016 presidential election made this year’s event feel all the more important—and more tense—than usual. With that in mind, organizers made sure to include several events in the weekend’s schedule with a decidedly lighter tone. Saturday ended with a chiptune 8-bit karaoke party, and halfway through the Con’s opening remarks organizers ceased talking and engaged the audience in a lively dance break to the tune of Rednex’s 1994 hit “Cotton-Eyed Joe.”

This year’s QGCon coincided closely with the release of Queer Game Studies, a collection of essays compiled by QGCon co-founder Bonnie “Beaux” Ruberg and Adrienne Shaw, an assistant professor at Temple University. According to conference organizer Chelsea Howe, many published academic game studies only discuss older games, which makes this volume of recent entries to the canon vital to the field. The book’s introduction positions queer game theory as indescribable, not so much a sub-genre of queer theory or game theory but rather a collection of different modes for talking about and designing games within the queer community. Queer game theory enables games, even those that lack overt LGBT themes, to be examined through a queer lens. Some entries include Georgetown english professor Amanda Phillips’ essay “Welcome to my Fantasy Zone” which explores the video game Bayonetta as a site of queer femme disturbance, and games critic Mattie Brice’s “What Games Could Learn from Kink,” in which she suggests games could benefit from looking at kinky play that values consent, context and empathy.

In that same spirit, many of the subjects discussed at the Con were not overtly LGBT-themed, ranging from Real Army Simulator, a game that seeks to find humor in Israeli conscription, to a talk by Tanya DePass on the importance of positive Black representation and realistic African hairstyles in games. One speaker spent the majority of their presentation explaining the history of twee krutt music in Iceland (Bjork looks a bit like Pikachu in this video) and ended by loosely connecting the subject to “neo-endearment” aesthetics in queer game design. For those unfamiliar with the term, both krutt and queer games tend to value a cute gentleness over loud aggressive approaches. (Few of the games at QGCon contained physical violence and none that I played featured explicitly pornographic content.) Also, both Krutt and queer games emphasize collaboration and meaning over a polished product.

A few of the games presented at the Con were a little unpolished, whether intentionally or otherwise. It still takes a great deal of money and time to make games, and many of the titles on view by queer designers rely on crowdfunding platforms like Patreon and Greenlight instead of AAA studio funding. Mo Cohen—a designer whose Kickstarter campaign for their point and click adventure Queerquest ultimately failed—offered a presentation on how to stay sane, handle trolls and take care of yourself while designing and funding a queer independent game.

The many obstacles queer game designers face in the industry were not only up for discussion on panels, but frequently arose in informal conversations throughout the weekend. Con co-organizer Dietrich “Squinky” Squinkifer’s Dominique Pamplemousse series of detective games featured promo materials stating that “all proceeds from game sales will go towards funding Squinkifer’s top surgery!” Squinkifer’s hopes to raise a total of $6,500, and the Dominique Pamplemousse games currently sell for $4.99 on Steam and on a sliding scale for as little as $2 on their website. While selling the necessary 1,500 or so copies of the game to meet their goal might be doable, Squinkifer’s situation also serves to highlight a continued lack of access to medical services for trans and gender-nonconforming people.

Much of the digital work at the conference took an autobiographical tone. Anthrotari, a choose your own adventure style visual novel that takes place on an old “AnthrOS” PC, describes itself as “a coming of age story of queer furries on the 90s ‘Net.” The user chats with furry friends and crushes under different pseudonyms, occasionally while roleplaying in a sort of high fantasy Olde English.

Steve Cha’s Revisions, described by Cha as a personal narrative in drag as a video game, quickly tells the story of his ESL Korean childhood and gay awakening using 2D motion mini-games. In one scenario, English words fly at Steve’s parents in the style of Atari’s Missile Command and the player, who plays from a young Steve’s point of view, must quickly click them to translate the phrases into Korean. After completing the mini-games, Revisions challenges players to revisit each vignette and enter a “Deep Design Dimension” in full 3D motion. As the game’s physical space is fleshed out, so is its emotional space. Mini-games with previously simple objectives like “click and drag queens onto the dance-floor” are more complicated in the Deep Design Dimension; for example, disagreements between Cha’s friends arise and they won’t even stand next to each other. The game turns a critical eye towards a gay community that is not always united, however, by the end of the sequence, hope is offered: players are eventually able to connect queer avatars in a sequence where the queens more or less get along.


“The process of making the game was largely therapeutic,” Cha told me. “I made the game as an opportunity to get the warring sides of myself to compartmentalize and talk to each other. I wanted to take that out of my head and put it onto a digital space.”