Socrates is often quoted, saying,  “The children now love luxury. They have bad manners, contempt for authority, they show disrespect for elders…”

While complaining about the young is a timeless phenomenon, I wonder what the Athenian Philosopher would have made of today’s millennials, in residence in a home or company near you.

It was a balmy lunch at the uber chic Matador in Ian Shrager’s Edition Hotel in Miami. Everything was divine, which just proves that experience, talent and longevity do matter. We were lunching with a group of diverse business owners who were all down on Spring break. The conversation centered on what one could do to keep younger employees happy.

“Do you think we should install a foosball or pool table?” A developer asked the group.

“Everyone loves foosball.” I nodded “we had one for years in my first ad agency and it’s a great draw when people are working late.” I said.

“What about free food and a pizza oven?” Art Prince offered.

“Someone I know tried and it kept people happy and… in the office.”

“I have a novel idea.” I suggested “Why don’t they do things to make us happy. Like coming to work on time.” I rolled a jaundiced eye.

“I’m so glad you bought that up” Madame Un-Real estate said “ Have you noticed with these Millennials …they tell you when they ‘re going on vacation without asking. I would never have done that back in the day when I worked for someone.” She reached into her logo LV clear beach bag for her compact.

“How is it they make modest salaries yet are always travelling to places like the Maldives or going away to music festivals?” The developer asked.

“Friday is the new Saturday” I offered. “While I read that no one is getting married anymore, every weekend it seems one of my Millennials is going to a destination wedding or bachelor party. No one even asks or tells me. They just come back from Barcelona or Cabo, jet lagged with a tan. I don’t travel as much as they do, I can assure you.”

“Today you have to have one extra person to fill in for all the time the Millennials take off. “ Madame Un-Real estate said.

“ I tried that.” I said “ And what happens when they’re out of the office?” I asked.

We all just shrugged, looked slightly bemused and did what we could to address the situation… we ordered more rose.

Millennials and Gen Z continue to intrigue and exasperate; perhaps because unlike Generation X and Y, for example, they offer a totally different set of aspirations and expectations. This group of digital natives also flex a rare muscle, they are one of the first groups to know more than their parents about something important — the internet. They have confidence and they swagger about, courtesy of the helicopter, or as I call it — private plane parenting they grew up with. They are twenty somethings who want everything now and what’s more, believe they deserve it all. ‘It’ being the stuff that we —my generation— consider the rewards of hard graft and intelligent planning. Woe betide their bosses and the companies that don’t have a handle on the new condition they exhibit in the work force; The Millennial Disease.

It is not untrue that I sometimes offer advice and mentorship to younger entrepreneurs or those referred by family and friends. On these occasions I pride myself on blunt honesty (since they ask) and am often harder on those I am closer to. Such was the case at a recent breakfast at the classic Odeon, with a talented Millennial on the older end of the scale. He is showing no signs  of dropping his disease-like tendencies and wanted to pick my brain.

“Congratulations on your baby. This is your second, correct?” I asked, as we sat down and he tucked his skateboard beneath the table.

“Yes” he stroked a starter goatee.

“Congrats to you both” I said, viewing the very adorable i-phone family snap taken at their townhouse in outer Brooklyn. “Beautiful family.”

“ And how is the job?” I asked, enquiring after his position as a Digital Producer.

“Well that’s just it. I’m no longer there.” he shrugged.

“Sorry to hear that” I said, a bit wide-eyed.

“No, I hated the politics and the hours were insane. They wanted me to stay late and come in on Saturdays. It was a sweatshop. So I’m taking the summer off and slowing down my job search. I mean, how many summers do I have left?”

“And your wife. What’s her opinion on all this?” I probed.

“Well, we don’t believe in help, so she wants me there and agrees. But that’s not the reason why I wanted to see you. I have this idea for a new business and wanted to know if  Swat Equity would fund it.” He told me the idea, which was, I have to admit, interesting  but I had to tell him that our new fund only invests in companies that have at least $1 million in revenue.

“Oh” he looked crestfallen, as if he thought I would be wiring the money intohis account pronto based on his father being a club acquaintance.

“If I was in your shoes, I would get a job. Things like health insurance and security are important when you have children and you and your wife made a decision to have two.”

“Look, you’re talking to someone who feels a vacation is “working in a nicer location”. As my father Stanley used to say “ Do what you love and love what you do and it’s not a job” I tried to reason with him to no avail.

“Have you tried therapy?” He looked concerned.

“ For years.” I said somewhat taken aback at his 20 something assessment.  “My advice for someone your age is to get a job and start your business idea in your spare time.”

“That’s so old school, sorry.” He shook his head, his top knot almost unfurling at the news. My final suggestion was simple, if he was serious about meeting others on his funding hunt, he should lose the skateboard.

It was a Thursday evening at one of my go-to favorites, BLT Steak. Dana and I were dining with my childhood friend Lucy and Ricky, her South American husband. During the dinner I noticed a father and son at an adjoining table who seemed to be staring a bit. I presumed it was because the father looked somewhat familiar and his college aged son may have gone to my alma mater. I had the distinct feeling that the son would approach the table in search of a job or internship in the advertising business. Just as I thought, before the duo headed out the door, the son made a beeline to the table but, this time … I was wrong on the subject matter. He approached my wife Dana who looked particularly gorgeous that evening.

“You are such a beautiful woman” He said without saying “excuse me” or wondering who the men were at the table.

“ I want, like your number?” He stood there with a self -satisfied expression.

Dana handled the situation with cool aplomb “ I’m quite flattered but I am married, thank you. My husband is next to me” She stated firmly.

He leaned in, disregarding what she said and whispered only to her.

“I’m sorry “ Dana said firmly and he walked away.

“I cannot believe that?’ Lucy said.

“What did he whisper?” I asked.

“He just leaned in and said he wanted my number anyway.” She shrugged.

“He was very cute though” Lucy said and Dana nodded, since to his credit he was a good looking kid. But kid he was never -the -less.

“The backpack threw me” Dana laughed. “Or was that college sweatshirt?”

when we were his age.

“ Yes, but I have to ask you, do you call that good parenting?” Lucy a well renowned therapist said.” The father saw you were sitting at a table with two other men. It would have been different if you were at a table of all women.” She looked dismayed.

“How about that I am the mother of 3 teenagers?” Dana stated.

did have off the charts confidence” I had to admit.

“That was surreal. I have to disagree..he had no social IQ.” Lucy elaborated. “ If he was a well brought up gentleman he would have first said “ I’m sorry for interrupting your dinner and I have no idea if this beautiful woman is single or married”

“Or if I was your wife , girlfriend or…your daughter” Dana needled me.

“That would have been more appropriate given he was minus 21.” Lucy shrugged.

“ These Millennials, they want summer Fridays and title inflation. Now they want my wife too” I rolled an eye.

“I have never seen anything like it” Lucy shook her head “ and I’ve seen and heard a lot in my practice.” She sliced her strip steak.

“I rest my case. It’s the Millennial disease come home to roost “ I said, thinking the disease had become a pandemic, with no cure in sight. 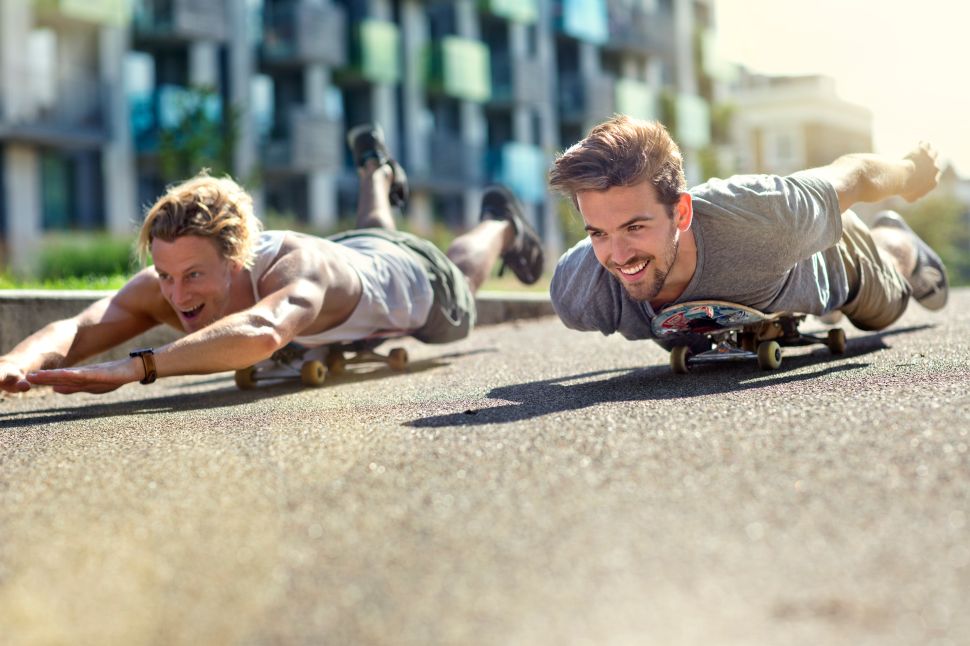