As Holy Week comes to an end, there have been many reasons for Christians to be confused, concerned, or frustrated over the last year. But this past Holy Week, for the first time, I found myself truly enraged.

I understand that I am more in tune than the average news consumer when it comes to the Middle East and the plight of Christians in that part of the world. Working for a nonprofit that rebuilds the lives of Iraqi Christians devastated by the Islamic State, I live and breathe these stories. But finally, after years of mainstream media silence, Christian genocide is undeniable. Still, a disturbing ignorance persists.

Like many Christians, I first heard of the twin bombings at Coptic Christian churches in Tanta and Alexandria, Egypt on the way to my own Palm Sunday service. As I pored over reports of worshippers pulled from the destruction of their churches, I thought that surely this time, it would be enough. This time, Western Christians would awake from their political stupor, clear their eyes of the fog of protests and petty outrage, and unite toward action with one strident voice of solidarity. When the horrific attacks were claimed by the Islamic State, it only heightened my expectation of the outrage I was sure would pour out from worshippers leaving their services with their families.

Once again, I underestimated the apathy of Western Christians.

In an age of apoplexy over misspoken words, tax returns, violent takedowns of airline passengers, or anything that can be captured by a smartphone, when it comes to the massacres of Middle East Christians, Western Christians are as silent as Egypt’s churches this Easter Sunday.

Western Christians have little excuse for their ignorance and silence. At roughly 10 percent of Egypt’s population, the Coptic Christian minority is the Middle East’s largest Christian community—and one of the oldest. Egypt is rich in early Christian history and scholarship; the Gospel writer Mark established its first churches. Yet although the church predates Islam in Egypt, they have borne the brunt of rising sectarian tensions since Arab Spring in 2011 and continue to endure a systematic campaign of terror designed to drive them from the region.

In fact, for many it was the Islamic State’s kidnapping and brutal beheading of 21 Coptic Christians in February 2015 that solidified the Islamic State as the most evil entity in the world.

In the United States, Christians’ only concern is how faith and politics mix. Our greatest challenge—and not to demean it in anyway—is how political correctness impacts the followers of Christ, who are often demonized by the press and on college campuses. But we have it easy compared to our brethren in the Middle East.

Just this past December, the bombing of a Cairo church overwhelmingly targeted women and children during a Sunday morning service. Five more Copts were murdered in January, and an ISIS hit list and video threat in February sent Christians fleeing Sinai in droves.

But this Holy Week, American Christians were more concerned about an airline than the spilled blood of those they call their fellow Christians.

Coptic Christian Samuel Tadros was devastatingly succinct on Twitter. Sharing the image of a bloodied palm on a pew of the St. George’s Church in Tanta, he said only, “This is who we are. Martyrs, sons and daughters of martyrs.”

I say to the Western Church, we have forgotten who we are. If we are not martyrs, we are brothers and sisters of martyrs.

Even ISIS knew who we were, when they used Coptic blood to declare war on the people of the cross.

We may be Sunday people, people of new life and of resurrection, but we forget the cross. Before we belong to the promise of the empty tomb at the beginning of Easter Sunday, we belong to the bloody cross at the end of Good Friday.

This is who we are, during this Holy Week and going forward. We are people of the cross; we are brothers and sisters of martyrs. We can no longer be silent.

Nicole Foy is Operations and Strategic Manager at the Iraqi Christian Relief Council and a contributor to the news and public policy group Haym Salomon Center. Nicole is an alum of the Philos Leadership Institute. 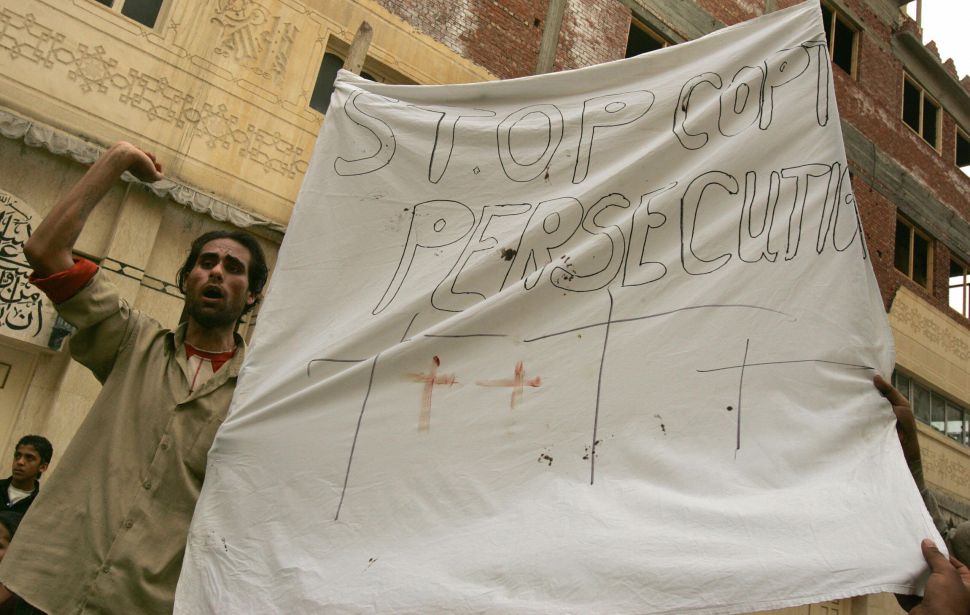