One of the most trusted members of President Donald Trump’s inner circle is his daughter Ivanka. She has an office in the White House and has attended her father’s meetings with world leaders (she’s also been the subject of many Reddit Photoshop battles).

While Ivanka’s outsize role has attracted plenty of media scrutiny and protest, it’s also had an effect on her new neighborhood in Washington, D.C. For proof of this, we can thank Mary F. Calvert, a Daily Mail photographer who snapped some candid photos of Ivanka’s Kalorama street during an LGBT demonstration there over the weekend.

Hundreds of protesters descend on Ivanka's $5 million DC home (well, she is part of the administration) while neighbor watches in delight. pic.twitter.com/mrOUuRMCqj

Here’s a close-up of that delighted woman Sington’s referring to:

Where to begin—the huge smile, the glass of white wine, the fact that she’s wearing a fur coat in the middle of April (not to mention the rainbow flag in the background)?

The woman (who Time magazine identified as Dianne Bruce) has become a viral sensation over the last two days. Here are some of the best social media reactions:

The neighbor watching the LGBT protest in front of Ivanka Trump's house while drinking white wine is definitely invited to gay brunch. pic.twitter.com/Lum7pwuOsz

This woman put on a full length fur coat in April to watch her neighbor get shamed. Inspirational. https://t.co/mUuzzkIvMe

DO Y'ALL SEE THE NEIGHBOR THO??? SHE MESSY AS FUCK. SHE DONE POURED HER SELF A GLASS OF WINE AND PULLED OUT HER FINEST FUR. ICONIC https://t.co/13cVbC2HaJ

Ivanka: Not this again.

Neighbor, in fur, with wine: I bet you regret turning down my charcuterie welcome basket now, don't you? https://t.co/mNMM38L90h

TFW a lady in a fur coat, drinking a glass of wine, smiles at the rabble rousers https://t.co/hDxaJafhNo

The Ivanka neighbor who pulled on her finest fur and poured a glass of wine to watch the dramaz unfold is so messy and i am so here for it https://t.co/zlMhS7XMbw

her neighbor put on a fur coat, poured a glass of 1968 chardonnay, and stepped outside for live entertainment I AM the neighbor https://t.co/OzGZuCyxEe

Homegirl came out the house in a fur coat WITH a glass of wine. You know they got prior beef. https://t.co/Ms8RTdSYu6

This is amazing 😂 Taking petty to a new extreme https://t.co/thHrnuDQ9l

Sington told the Observer that his tweet has gotten almost three million impressions since Sunday. He also said that he spoke with Calvert, who is “thrilled” that the photos went viral (the Observer has reached out to her as well).

“The response has been overwhelming,” Sington said in an email. “Many, many people are looking at the fur coat lady as their hero, calling her their ‘spirit animal.'”

There goes the neighborhood. 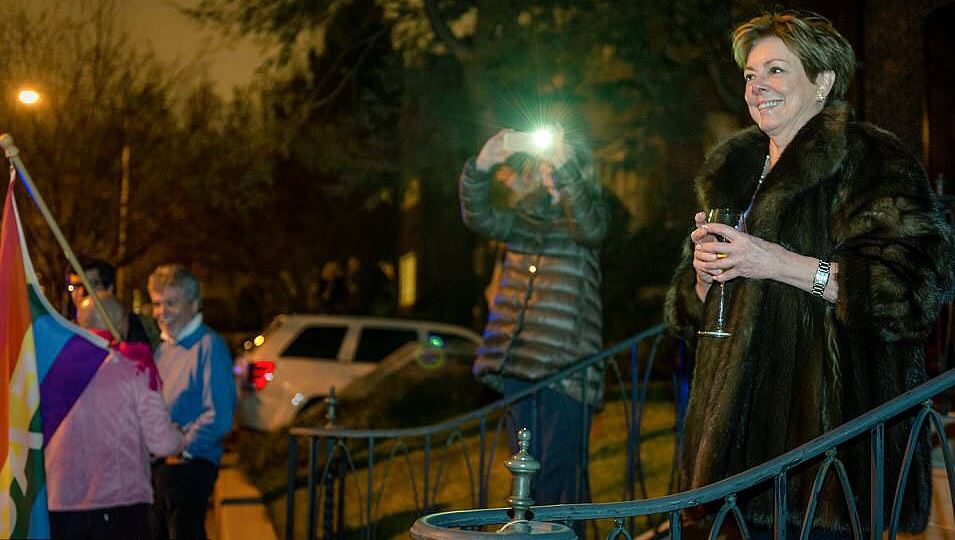