Congressman Jerrold Nadler last night slammed the State Senate’s eight-member Independent Democratic Conference, a breakaway faction that has maintained a power-arrangement with the Republican caucus since 2011—and suggested that voters seek “electoral retributions” against the one IDC affiliate whose district overlaps with his.

The liberal Democrat took a constituent questions about the splinter cell at a town hall on the Upper West Side, even as he acknowledged the event was supposed to focus on policy rather than politics. He asserted the group must somehow be obligated to rejoin the larger Democratic deputation.

“I will stretch the rules a little: the IDC—the Independent Democratic Conference—I think, is one of the worst things that’s come along in a long, a long time,” he said to applause. “I think it’s a terrible, it’s a terrible thing and we have to get rid of it.”

The congressman prescribed two possible ways to force the IDC to collaborate with Democrats rather than the GOP: either enlist Gov. Andrew Cuomo—normally a Nadler ally—or knock its members out of office.

He alluded to freshman State Senator Marisol Alcantara, a member of the IDC whose turf covers much of Upper Manhattan and stretches down the Upper West Side, without mentioning her by name.  The congressman prescribed two possible remedies for forcing the IDC to collaborate with Democrats rather than the GOP: either enlist Gov. Andrew Cuomo—normally a Nadler ally—to apply political pressure, or to knock its members out of office.

“From a theoretical point of view, there’s only two ways that kind of problem can be dealt with. One: the governor, could decide to knock some heads together and exercise some muscle,” Nadler said, even as he admitted Cuomo has shown “no interest” in coming to the aid of his own party in the State Senate. “The other way, obviously, is there are eight members of the IDC, one of them on part of the West Side, and that could have electoral retributions, saying ‘you can’t get away with that.”

A former aide to Nadler, Micah Lasher, opposed Alcantara in the Democratic primary last year. She, along with Brooklyn State Senator Jesse Hamilton and Queens State Senator Jose Peralta, joined the IDC in rapid succession over the past six months.

This cured the renegade group‘s longtime optics problem of being entirely white, in contrast to the heavily minority mainstream Democrats. Alcantara and Hamilton have alleged that their critics are racists opposed to people of color enjoying the perquisites of power attending the IDC’s accord with the GOP majority.

The pact with the Republicans has allowed IDC members to hold committee chairmanships—and draw special salary stipends for those posts—and granted the group’s leader, State Senator Jeffrey Klein of the Bronx, a voice in budget negotiations. The latter privilege was traditionally reserved for the governor, the speaker of the Assembly and the majority leader of the State Senate.

The IDC has maintained that Klein uses that voice to advance progressive policy items that would otherwise have no chance of passing in a Republican-run State Senate. The GOP’s hold on power is extremely fragile, sustained solely this year by Brooklyn State Senator Simcha Felder, a non-IDC Democrat who has sat with the Republicans since his election in 2012.

A spokesman for the eight defectors argued that Klein was responsible for legislation passed in the budget that bars prosecutors from trying 16- and 17-year-olds as adults in most nonviolent felony cases. The IDC also took credit for $10 million in taxpayer funds allocated to helping undocumented immigrants fighting deportation.

“The Independent Democratic Conference just ensured passage of Raise the Age legislation which lingered in the legislature for a decade, and managed to secure $10 million for immigrant legal services to guard the very same immigrants Congress has failed to protect,” said Lis Smith, who also worked on Alcantara’s campaign.

Critics assert that the turncoat coterie functions as a kind of valve for the calculating Cuomo, allowing him to pass liberal initiatives he favors while containing those he opposes.

Nadler prevaricated when asked if he would fundraise for the State Senate Democrats, who depleted their cash reserves last year, so as to help unseat Alcantara and her compatriots in 2018.

Moving against Alcantara could bring Nadler into conflict with his colleague, Congressman Adriano Espaillat, who backed her for his former State Senate seat last year. 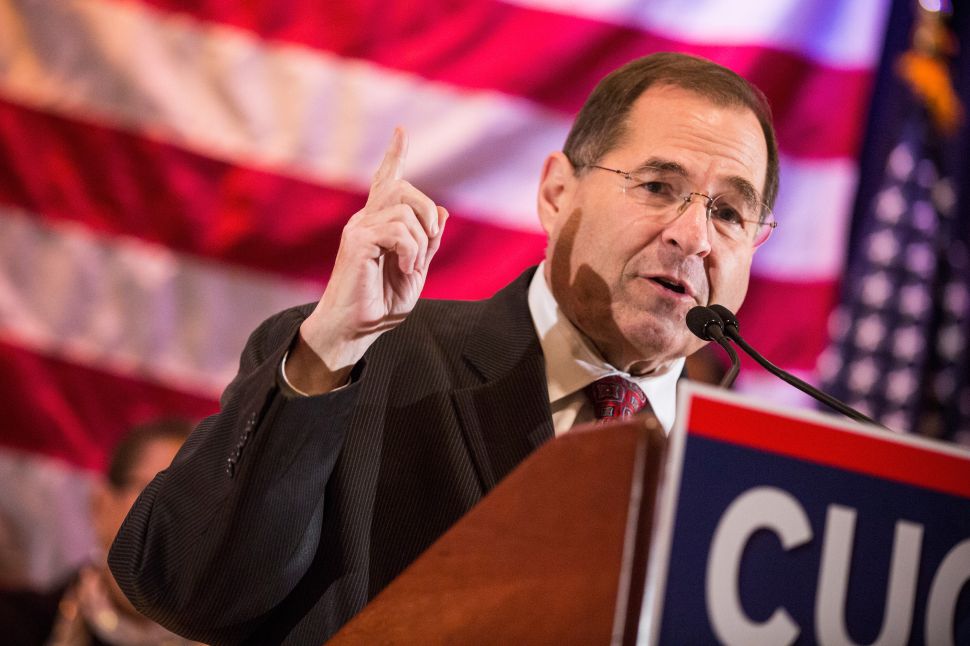