Passover Seders can be dull, prolonged affairs that test the patience of famished guests and iPhone-addicted teens, but the story behind the Jewish holiday is anything but boring—there’s a plague of locusts, a river of blood, and a chase scene through the Red Sea for starters. The drama is all in the telling.

The Hagaddah traditionally serves as a both a storybook and ceremonial blueprint, from which celebrants retell the story of exodus from Egyptian bondage beginning on the first Passover. Many people don’t realize there’s an even more accessible and totally epic retelling of the Old Testament story: Metallica’s “Creeping Death” from 1984’s Ride the Lightning.

The hard-hearted Pharaoh, the burning bush, death of the firstborn son—it’s all in the crushing thrash metal classic.

A cult YouTube video uploaded by user Savegemister a decade ago perfectly showcases this connection, setting the lyrics to film footage from Cecil B. de Mille’s The Ten Commandments, on which the song was based. (James Hetfield’s lyrics are sung from the perspective of the Angel of Death, natch: “Die, by my hand/ I creep across the land/ Killing first born man.”)

As a high school kid, Michael Shefrin excitedly played the song for his Orthodox family, but didn’t find much support. “I said, ‘But they’re singing about Pesach [the Hebrew translation of Passover]’, and my family was like, ‘No…We can’t…No.’ That experience helped me find my own identity through music.”

Today, the self-professed metalhead and former Linkin Park manager is an assistant Rabbi at Temple Emanu-El in Sarasota, Fla., who has rocked out to the track as a way of opening up conversation with young religion students.

“Metallica does quite a good job of re-imagining the original text,” says Shefrin, who recalls one particularly fitting concert he attended in the California desert. (“The show was during Pesach week. One minute I was sitting there with my matzo and cream cheese, then they opened with ‘Creeping Death’! It was Pesach in the desert, for real.”)

The tale pinpoints the moment of Jewish peoplehood, resonating with Shefrin then and now. “Giving classic rituals and stories a different perspective is also something I also try to do in my rabbinate,” he says.

Passover, which begins this year on April 10 and continues through April 18, is the most celebrated Jewish holiday in America, by Jews, non-Jews, and the matzo-curious.

Shefrin calls the Seder “the greatest pedagogical experience out there,” with something in the ritual retelling for everyone.

“Who among us hasn’t felt enslaved to something that they want to be free from? Who in our lives hasn’t overcome an experience that has held us down?” he asks.

You can find a sense of unity, compassion, and social justice around the Seder table, or if it suits, in the distinctive crunch of Metallica’s Passover epic. Or both.

That’s how Shefrin does it—he’s never giving up those “monster riffs, and the incredible sing-along chorus of, ‘Die! Die! Die!’ How can you not love that?” 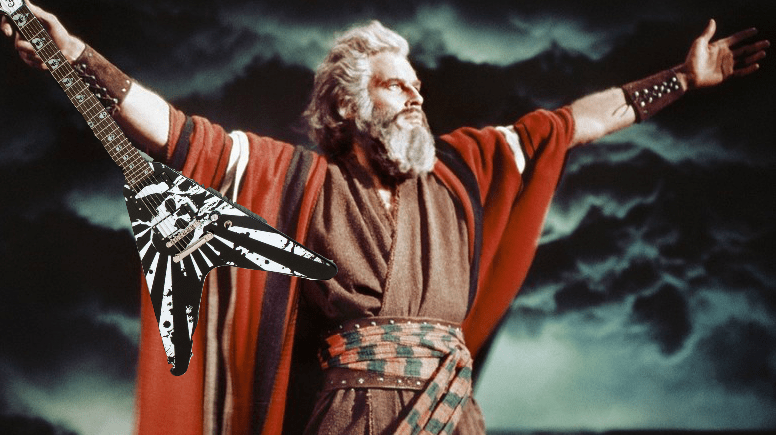