Given the chance, fantasy nerds (I among them) will debate just about anything, especially if the topic happens to be when original perfect source material has been turned into a blasphemous appropriation by charlatans. That’s basically what conspired when OG godfather’s of geek J.R.R. Tolkien (The Lord of the Rings) and C.S. Lewis (The Chronicles of Narnia) got together for a movie date in 1938 to see the newly released Walt Disney animated feature film Snow White, according to a report from Atlas Obscura. But their issues with Disney’s family friendly retelling of the Brothers Grimm fairytale weren’t with unfaithful plot lines. Rather, the two authors took serious issue with the animated film’s overall aesthetics and specifically its depictions of dwarfs, which were so offensive to the pair that Lewis questioned the circumstances of Disney’s upbringing and Tolkien almost threw up.

Lewis was so upset after seeing Snow White that he committed his thoughts to paper, writing the following message to his friend A.K. Hamilton:

Dwarfs ought to be ugly of course, but not in that way. And the dwarfs’ jazz party was pretty bad. I suppose it never occurred to the poor boob that you could give them any other kind of music. But all the terrifying bits were good, and the animals really most moving: and the use of shadows (of dwarfs and vultures) was real genius. What might not have come of it if this man had been educated–or even brought up in a decent society?

Let’s break that down. Lewis thought dwarfs should be ugly, but not ugly…cute? And the fact that Disney decided to let the seven dwarfs get down to the free form musical genre that is jazz pissed off Lewis because Disney hadn’t considered any of Mozart’s symphonies first? Heigh Ho must have really gotten his toes tapping then. But he was cool with all the scary parts, which makes sense because the real stories of the Brothers Grimm are quite dark. Between calling Disney a boob and throwing a dig at his schooling, Lewis reveals that he (like the rest of us nerds) is concerned with accuracy when it comes to remakes above all else.

For the record, Narnia featured dwarfs a plenty: red dwarfs, black dwarfs, renegade dwarfs and let’s not forget Trumpkin, who is portrayed by Game of Thrones‘ Peter Dinklage in the 2008 live-action movie The Chronicles of Narnia: Prince Caspian. But while Lewis once chided Disney for giving his dwarfs “bloated, drunken, low comedy faces,” Lewis’ weren’t all together different in their own literary descriptions. They were smaller than humans, they sported beards and they were handy craftsmen. Sound and look familiar?

On the other hand, Tolkien’s take on dwarfs was different indeed—he even spelled the word differently: dwarves. In Middle-earth, dwarves were mighty warriors and revered miners who created massive underground cities and dealt in precious metals. But, again, they were short and stocky, had longs beards, and notably males outnumbered females significantly. But Tolkien infused his the mythical creatures with gravitas and Gimli’s participation in the Fellowship of the Ring made them central figures in his epic trilogy. What choice words did Tolkien have after seeing Grumpy, Sleepy, Dopey, et. al. on screen? Writing to Lewis, Tolkien called Disney’s work “vulgar,” and in later correspondences with Stanford University’s J.L. Curry he complained that the filmmaker’s art was “hopelessly corrupted” and called him a cheat. “Though in most of the ‘pictures’ proceeding from his studios there are admirable or charming passages, the effect of all of them is to me disgusting. Some have given me nausea…,” wrote Tolkien.

Tolkien even went on to use Disney’s name as a form of insult when rejecting illustrated versions of his own work, as he did when British artist Horus Engels attempted to draw characters from The Hobbit. “He has sent me some illustrations (of the Trolls and Gollum) which despite certain merits, such as one would expect of a German, are I fear too ‘Disnified’ for my taste: Bilbo with a dribbling nose, and Gandalf as a figure of vulgar fun rather than the Odinic wanderer that I think of…,” said Tolkien in a letter to his publisher.

So what would the creator of Middle-earth’s great builders think of the fact that Ralph Balski went on to turn The Lord of the Rings into an animated film starring animated dwarfs in 1978, just a few years after the author’s death. Bakshi’s version of Gimli certainly wasn’t as rosy cheeked as Disney’s, nor was he prone to breaking out into song in the mines, but then again actor John Rhys-Davies’ portrayal of the character in Peter Jackson’s live-action films was frequently a source of comedic relief (who remembers “Nobody tosses a dwarf!”) in an otherwise grimly serious, action-packed epic.

Listen, Tolkien and Lewis—as authors of some of the most influential fantasy series of all time—were totally entitled to their opinions. Just as I, as a self-identified geek girl, am well within my rights to question the glaring absence of female dwarfs from the worlds of all three auteurs’. Let’s forget about whether Dopey looked like he was boozing for a moment and discuss the fact that when Gimli addresses this issue in his Two Towers monologue says that female dwarves basically look just like male dwarves and that’s why people think they don’t exist. That seems like a much more important world-building detail worth debating. 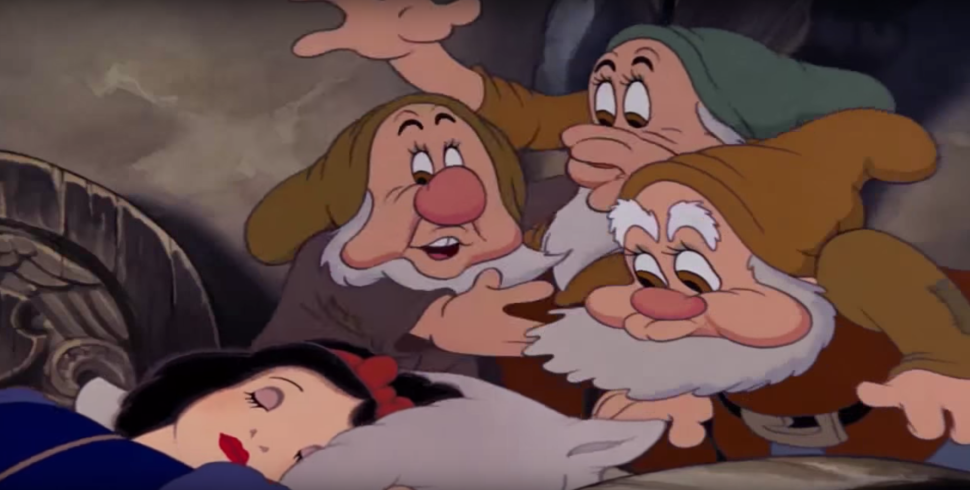