The portrayal of newly confirmed Supreme Court Justice Neil Gorsuch as a conservative ideologue who will seek to roll back advances in individual rights and to rule that social programs are unconstitutional is alarmist and misleading.

In many ways, the new Supreme Court justice is the antithesis of Donald Trump. Justice Gorsuch has a reputation for being both thoughtful and disciplined on the bench. At his confirmation hearings, one of the most common criticisms was that he relied too heavily on the text of the Constitution.

His reputation as an “originalist” doesn’t necessarily mean that he will work to advance conservative ideals. Originalism is a theory of constitutional interpretation, not a political ideology.

“I’m happy to be called [an originalist],” Gorsuch stated during his confirmation hearing. “I do worry about the use of labels in our discussion … as if originalism belonged to a party. It doesn’t. As if it belonged to an ideological wing. It doesn’t.”

Gorsuch is correct. If originalism were to find an association with any political philosophy, it might find the most common ground with libertarians. They maintain the idea, rooted in history, that the framers of the U.S. Constitution drafted a document to protect people from the government.  They wanted to preserve checks and balances between the federal government and the states in order to prevent too much power from being vested in a central governmental authority.

Originalists believe judges should interpret the Constitution using the meaning that its words and phrases held at the time it was written. Accordingly, they reject the notion that it is a “living document” that can change along with society. If changes must be made to address modern concerns, then originalists believe the best course of action is to amend the Constitution.

The late Justice Antonin Scalia and current Justice Clarence Thomas are among the most well-known supporters of originalism. While Justice Scalia was an admitted conservative, his dedication to the text of the Constitution sometimes resulted in “liberal” decisions. For example, he was one of the key votes in favor of ruling that the First Amendment protected the burning of the American flag. He also wrote the majority opinion in Brown v. EMA, which held that California could not ban the sale of so-called violent video games to minors.

Like Scalia, Gorsuch maintains that the proper focus of the court should be on the meaning of the framers’ writings as they were understood by 18th-century Americans. “It would be a mistake to think that originalism turns on the secret intention of the drafters of the law,” Gorsuch said in response to questioning from Sen. Dianne Feinstein. “When it comes to equal protection of the laws, for example, it matters not a whit that some of the drafters of the 14th Amendment were racists — and they were.”

It remains to be seen what types of “originalist” Gorsuch will become when he is faced with the tough cases that reach the Supreme Court. On issues like gay marriage, Scalia strictly interpreted the Constitution to prohibit such a right, citing the fact that it was illegal when the country was founded. Nonetheless, other originalists focus on what the framers meant by “equal rights.” They conclude that while the meaning of the words remains the same, the implications evolve along with social norms.

While President Trump has also described himself as an originalist, he and Gorsuch may not always see eye-to-eye. Originalists are strong proponents of the system of checks and balances outlined in the Constitution. Just as they criticize judicial activism, they also vehemently oppose presidential actions that exceed the limits of their executive powers.

In his concurring opinion in NLRB v. Canning, which overturned President Barack Obama’s use of recess appointments, Scalia wrote: “The court’s embrace of the adverse-possession theory of executive power (a characterization the majority resists but does not refute) will be cited in diverse contexts, including those presently unimagined, and will have the effect of aggrandizing the Presidency beyond its constitutional bounds and undermining respect for the separation of powers.”

On the federal bench, Gorsuch also argued that a strict separation of powers is necessary to preserve liberty. In his dissenting opinion in United States v. Nichols, he wrote:

The framers of the Constitution thought the compartmentalization of legislative power not just a tool of good government or necessary to protect the authority of Congress from the encroachment by the Executive but essential to the preservation of the people’s liberty… . By separating the lawmaking and law enforcement functions, the framers sought to thwart the ability of an individual or group to exercise arbitrary or absolute power.

As Justice Gorsuch acknowledged in his confirmation hearing, there is no way to predict how he will rule on individual cases. He was certainly not the Supreme Court nominee a Democratic president would have chosen, but he will not interpret the Constitution in a way the framers would not have conceived in order to advance a particular political ideology. 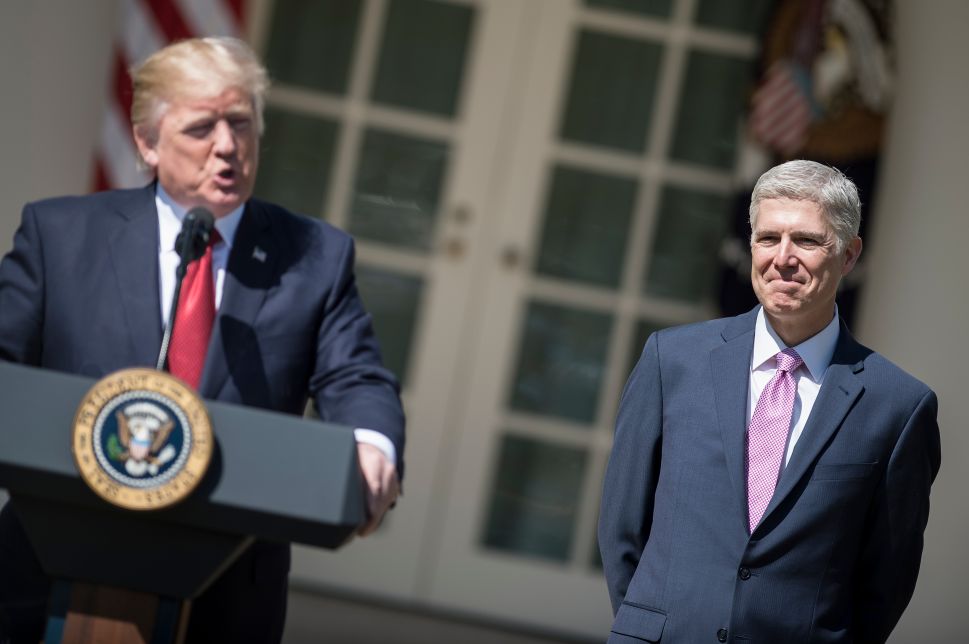