At this point in 2017, it’s safe to assume that you (or someone you know) has sweat to the Bikini Body Guide. Or at least attempted to squat your way through a few days of the fitness program, which was designed by Kayla Itsines. We say that because according to the analytic firm App Annie, the Sweat With Kayla workout app raked in a cool $17 million in 2016. Ranking as the No. 1 fitness app on iTunes, Intsines’ program is downloaded more than Nike+ and Under Armor’s MyFitnessPal.

Also boasting 6.6 million Instagram followers, Itsines is more than just an Australian sensation, she’s officially been crowned the top fitness influencer in the world, in a new ranking by Forbes. The 25-year-old began her empire along with her boyfriend Tobi Pearce in March 2013. Now, she sells out stadiums for her Sweat Tours in mere minutes and is always promoting the progress of her followers, by posting their before and after shots on her Instagram.

“Do I regret calling my guides Bikini Body? My answer is yes,” she told Bloomberg in a 2016 article on her cult following. When she was first starting out, most of Itsines’ clients had goals to feel comfortable in a skimpy two-piece. But as her empire grew, she realized that the name didn’t quite reflect the purpose she set out to achieve.

Same outfit – difference stance – different mirror – different time of day !! 😕 I totally forgot about what mirrors and lighting can do, because I see my body everyday so I know what I look like in person! Yesterday I recorded a video of me working out and was told in my video that I looked " so strong". Today (the next day – different outfit) I got told I look weak, skinny and I've "lost weight". I'm the same weight as yesterday when you called me strong 😝Everyone is entitled to their opinion 💜💜I'm just showing you ladies a 'same day' comparison 😘😘www.kaylaitsines.com/app

“So, when Tobi and I released the app, I changed the name to something that I felt represented hard work, dedication, empowerment, strength, team work, and more,” Itsines said in an Instagram post, explaining why her app is now called Sweat With Kayla, not Bikini Body Guide.

Following Itsines on the list of influencers is Jen Selter, of #belfie fame, in second place; Emily Skye a fellow Australian, is in third place. Head to Forbes to check out the rest of the list…and perhaps get some workout inspiration from these incredibly toned, and insanely successful, individuals. 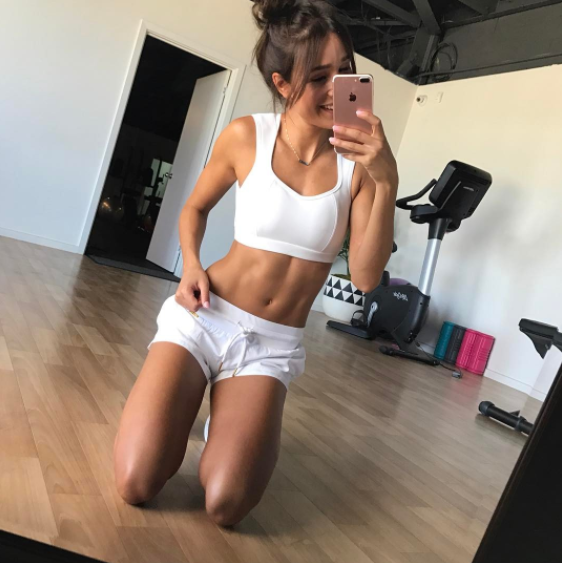