With Earth Day winding down, and climate change still headline news, an annual event has become the perfect occasion for people around the world to speak out and rally behind the environmental issues about which they feel most passionate. At the Avalon Hollywood on April 20, celebrities gathered together for the third annual Keep it Clean Live Comedy Benefit for Waterkeeper Alliance. The All-Star lineup of performers included Jeff Ross, Bill Burr, Zach Galifianakis, Tig Notaro, Garfunkel & Oates, Rachael Harris, Cheryl Hines, and Slink Johnson, and celebrity guests including Calum Worthy, Tricia Helfer, and Chad Lowe.

Everyone in attendance was there to help raise money to keep local bays, streams, and coastlines around the world clean. There’s something very awesome about Waterkeeper Alliance’s initiative to support clean by charging people for tickets to hear dirty jokes.

“Here’s something you want to avoid while putting suntan lotion on your sister’s back,” Galifianakis said. “Eye contact.”

After walking the “blue carpet,” performers mingled with guests during a VIP pre-show cocktail hour in the [Avalon] lobby, decorated with an elaborate oceanic theme.  With a video photo booth set up and assigned seating, it almost felt like being at a bar or bat-mitzvah. Scoping out the iconic Hollywood club, Galifianakis asked us, “Think anyone has ever done cocaine in this building?” And I burst out laughing. Perhaps, a little too hard.

Servers walked around offering plates of vegetarian sushi, sliders and zucchini cakes. I would’ve donated a lung for some pigs-in-a-blanket. Or even a Bagel Bite. Oh, Los Angelenos and their pristine carbon footprints. I know ya’ll are stopping at In-N-Out on the way home.

Bill Burr, dressed in a very dapper grey suit and purple tie, stood out from the crowd.  Since Waterkeeper Alliance President Robert F. Kennedy, Jr. was in attendance, Burr felt fancy attire would be necessary for “freakin’ American royalty,” he says. “I heard Kennedy was going to be here. I thought it was one of those events,” the 48-year-old comedian explains, “No one else dressed up.”

This is a fact.

“And you’re making me feel silly.”

It was disappointing to discover that Keegan Michael-Key and Sarah Silverman’s appearance were merely unmemorable pre-taped video messages, but funny ladies Cheryl Hines, wife to Kennedy Jr. and Rachael Harris quickly remedied that feeling. Opening up the show, Harris cried, “Obammaaaa. We miss you!”

“We never really thought it would be our administration that would be calling the most attention for the fight for clean ,” Hines said, “[especially] by derailing every step that we’ve made to move forward. Oh my, God. Obamaaaaaa.”

This current universal feeling of hopelessness was a theme throughout everyone’s bit. “If we don’t laugh. We cry,” Jeff Ross says. “This is America’s mid-life crises. We need to come together as a country and just admit civilization has had a great run.” The Roastmaster, reminiscing about being a guest at Hillary Clinton’s victory party, described what it was like being at the Javits Center on Election night: “Have you ever been to a wedding, and the bride dies walking down the aisle?”

Galifianakis kept the crowd rolling. “I don’t have a lot of time,” he started. “I left my 3-year-old son at Coachella. I just came back into town to get a new outfit.” Known for the hilarious Between Two Ferns interview sketch show, and of course, The Hangover, I had never seen his standup routine. Nor had I ever seen him in person.

The 47-year-old North Carolina native is strikingly handsome. No joke. His clear skin appeared luminescent under the stage lights. Like Fabio, the Baskets star continuously flipped his thick wavy hair throughout his set, and even though he was wearing khakis and an unfortunate two-tone windbreaker, maybe he didn’t know he’d be performing Los Angeles that night, he’s scruffy, teddybear sexy. If Dad bod can be a thing, so can this.

Hesitant to talk about “that guy,”  Galifianakis admits, “After the election, I told my wife, we’re moving..  Like we’re moving! We’ve lived in Trump Tower now for…” And the winner for Best Joke of the Night goes to…

At the afterparty, at which a french fry bar and pardon while I try to contain my excitement, even more vegetarian-friendly fare were served, everyone took full advantage of the bars serving in the upstairs VIP area. I kept making laps around the room, hoping to find the hidden meat station. It’s there, just no one is talking about it, right? Pretending not be hungry at Hollywood parties is truly an art, and it’s one that I’ve never cared to master.

Seriously considering the dangerous gamble of buying one of those street dogs from an outside vendor, even though I didn’t want to, it was time to leave. Walking outside, I began humming Frozen Lullaby, one of the songs Garfunkel & Oates had performed during the show. “When a man doesn’t love a woman very very much, he signs away his paternal rights and jizzes in a cup. With lots of money and scientific genius, hormones pain. And of course, uhm. Jesus!” 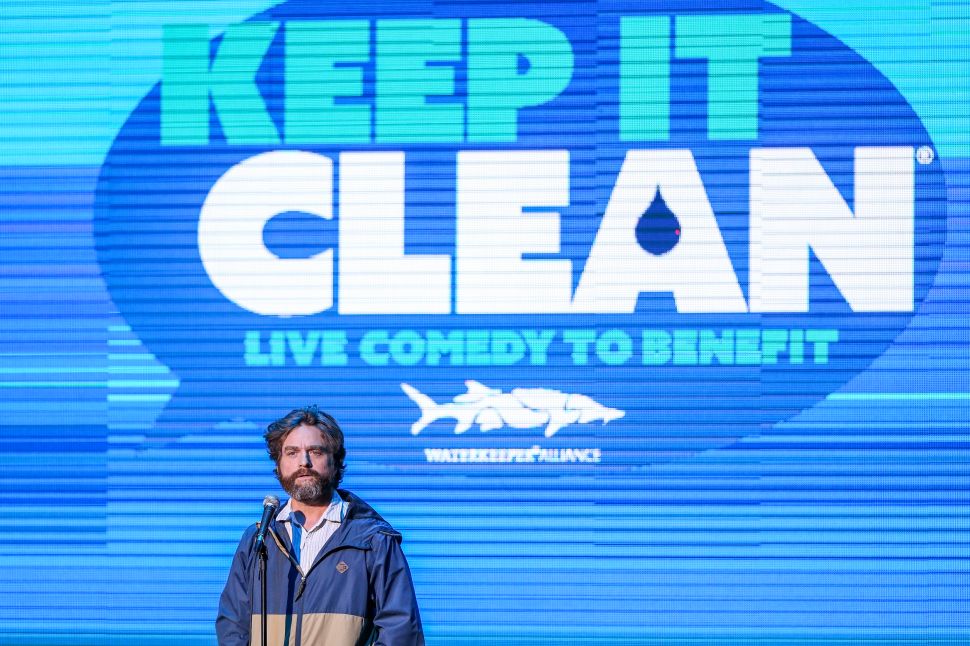