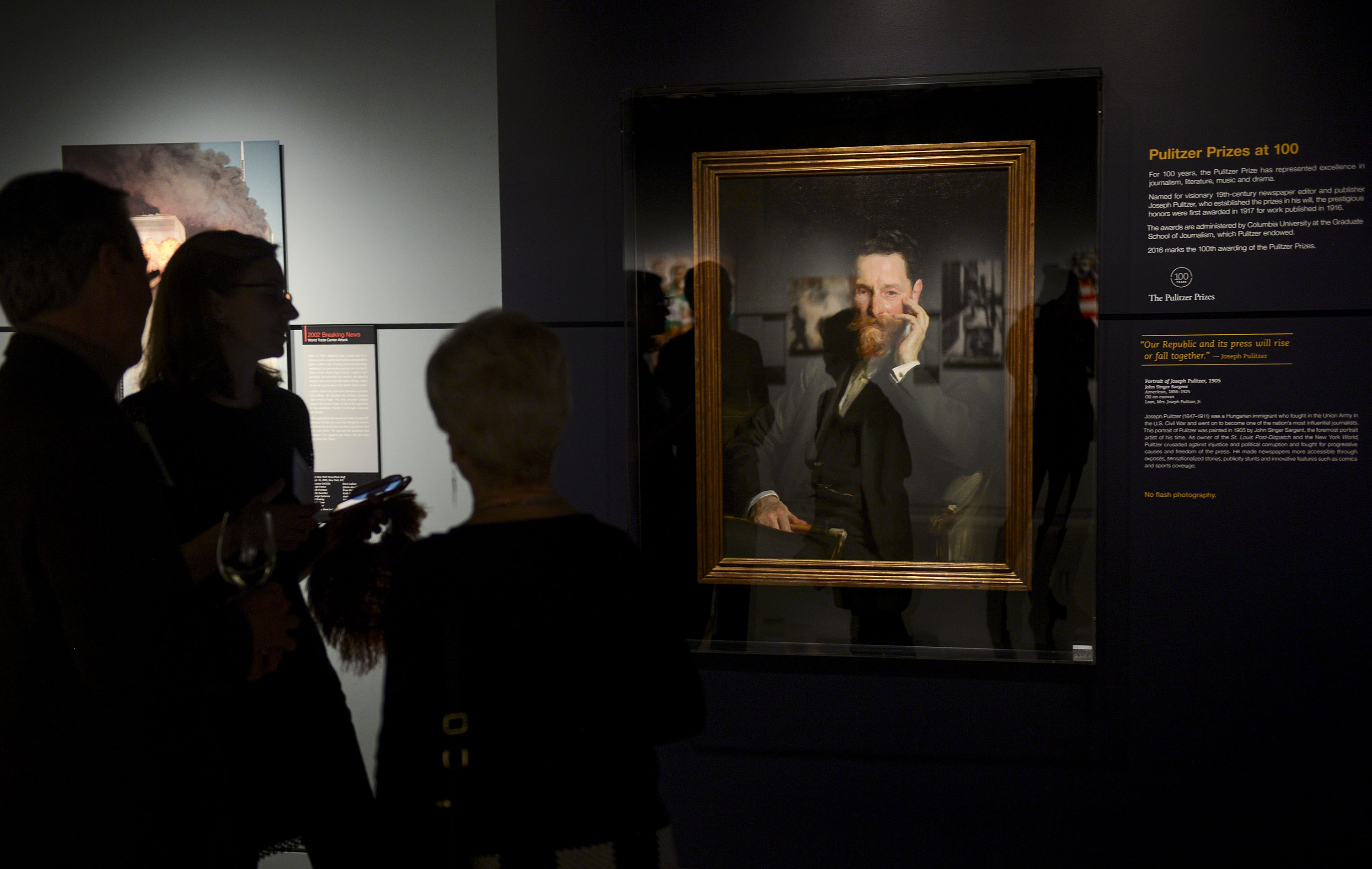 A portrait of Joseph Pulitzer, oil on canvas, by John Singer Sargent, is on display at the Newseum during the Centennial Celebration of Pulitzer Prizes at The Newseum on January 28, 2016 in Washington, DC. Leigh Vogel/Getty Images

The 2017 Pulitzer Prizes have just been announced, and this year’s winners of the prestigious award include Charleston Gazette-Mail reporter Eric Eyre for his investigative report on the drug companies that flooded West Virginia with opioids and New York Times Magazine writer C.J. Chivers for his article about a veteran of the war in Afghanistan suffering from PTSD.

I’ve done research on award-winners for some time, analyzing Pulitzers granted since 1995 (the first year for which award-winning stories are available through the organization’s online archive). In studying the winning stories, we’re able to see what gets recognized as good journalism.

My research reveals something surprising: What distinguishes Pulitzer Prize-winning stories is not only painstaking journalistic work on important social issues, but also the use of emotional storytelling.

This is surprising because U.S. journalism has long championed its objectivity. And because objectivity tends to be seen as emotionless, emotional storytelling tends to be viewed as anathema to good journalism.

The winning stories, however, upend this narrative, showing that it’s possible to retain objectivity and also stir the feelings of readers.

The journalistic goal of objectivity first emerged around the end of the 19th century. It was motivated, in part, by a desire to broaden newspaper readership base by asserting the independence of the press from political parties and ideologies. And in order to maintain objectivity, the thinking went that journalism should be based on cold, hard facts. Journalists needed repress their own views and feelings.

According to standard practice of news reporting, the information should be delivered in an “inverted pyramid”-style lead paragraph, telling readers the most important facts first. The idea is that the objective style sends a strong signal about the independence and trustworthiness of journalism – something that, in the age of fake news, may be more important now than ever.

However, the objective style of journalism has been criticized for its dullness, for “freeze-drying the topic and manufacturing boring journalism.”

Instead of relying on the edicts of objectivity, award-winning journalism draws heavily on telling personal stories about people caught up in news events. My research shows that across hard news award categories – feature, explanatory, international, national, public service and investigative reporting – Pulitzer Prize winners eschew the standard “inverted pyramid.” Instead, they’ll often rely on what journalists refer to as an “anecdotal lead.”

An anecdotal lead draws the reader into a story with wider sociopolitical implications by illustrating how it affects a particular individual or group.

We see it in the winner of this year’s feature writing award, C.J. Chivers’ “The Fighter,” which shows the horrors of war by telling the story of one marine’s descent into violence after his service in Afghanistan:

“Sam Siatta was deep in a tequila haze, so staggeringly drunk that he would later say he retained no memory of the crime he was beginning to commit. It was a few minutes after 2 a.m. on April 13, 2014. Siatta had just forced his way into a single-story home in Normal, Ill., a college town on the prairie about 130 miles southwest of Chicago. A Marine Corps veteran of the war in Afghanistan, he was a 24-year-old freshman studying on the G.I. Bill at the university nearby, Illinois State. He had a record of valor in infantry combat and no criminal past.”

Similarly, the Associated Press won the coveted Public Service Pulitzer last year for a series exposing the grueling labor conditions in the seafood industry. The series opened with the experience of Burmese slaves forced to work in Indonesia:

“The Burmese slaves sat on the floor and stared through the rusty bars of their locked cage, hidden on a tiny tropical island thousands of miles from home. Just a few yards away, other workers loaded cargo ships with slave-caught seafood that clouds the supply networks of major supermarkets, restaurants and even pet stores in the United States. But the eight imprisoned men were considered flight risks – laborers who might dare run away. They lived on a few bites of rice and curry a day in a space barely big enough to lie down, stuck until the next trawler forces them back to sea.”

By using personal stories to elicit empathy for individuals, these stories all enable us to understand how real people are caught up in the large, bewildering forces that drive our world.

Of the stories I analyzed, more than three in five used anecdotal leads, while just under one in five drew on the conventional inverted pyramid. Stories of individuals caught up in the news were featured in 62.4 percent of stories.

It’s a trend that has been remarkably stable since the mid-1990s.

This type of storytelling is just one of several markers of what I have referred to as a “strategic ritual of emotionality”: an institutionalized and systematic practice of journalists infusing their reporting with emotion.

However, this doesn’t mean that the journalists write about their own emotions. Instead, they “outsource” emotions to the people whose stories they tell. According to my research, stories often use emotional language – for example, quoting worried investors, frightened children, hopeful villagers or anxious parents – but never in reference to the journalist’s emotions. What this suggests is that award-winning journalism is able to both maintain its allegiance to objectivity and tell emotional stories.

I’m not the first to notice the emotionality of award-winning journalism. For example, the journalist and academic Susan Shapiro has criticized the “sob sister” style of journalism which of is “calculated to snag readers by the emotions and not let them go until they burst, on cue, into tears.”

What my research suggests, however, is that Pulitzer Prize-winning journalism’s use of emotional storytelling is not merely focused on emotional appeals for their own sake. Rather, eliciting empathy from readers enables journalism to render abstract and complex events understandable and relatable.

In a world where our experiences and backgrounds are so varied, this type of storytelling is indispensable. And if journalism can successfully tap into universal emotions to bridge divides and elicit mutual understanding, such an achievement truly deserves an award.

Karin Wahl-Jorgensen, is a Professor and the Director of Research Development and Environment in the School of Journalism at Cardiff University. This article was originally published on The Conversation. Read the original article. 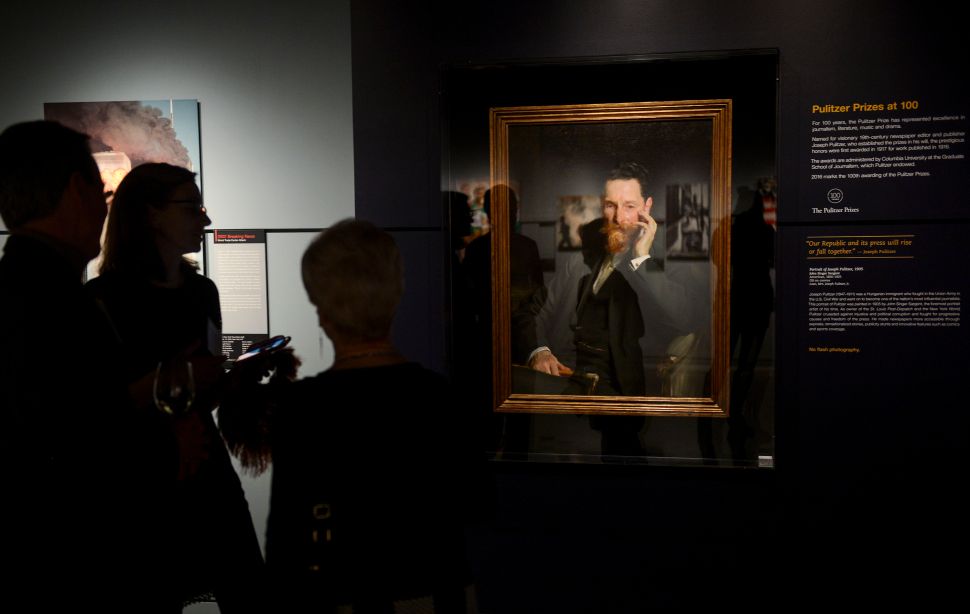