When putting together a playlist of party songs among friends, you’ve got to strip away all the highfalutin narratives and context informing the music you like and just queue up the tracks that make you boogie. These are the sacred, warm months when simply feeling it matters the most.

Rising above the crusty muck of Brooklyn garage rock ubiquity, the tunes from Las Rosas‘ debut LP, Everyone Gets Exactly What They Want, weasel their way onto my current communal playlists time and again. The three-piece doesn’t reinvent the wheel so much as refine it—in an age when lo-fi culture is at an all-time high, Las Rosas took their sweet time making this proper debut sound lush and full.

Frontman Jose Boyer still has the druggy, “fuck you, dad!” ambivalence of his short-lived but beloved mid-aughts Matador band Harlem, and these days, when the psych-punk genre has countless acolytes churning out speedy power-chord anthems at the altar of John Dwyer, Las Rosas take care to build songs with the minor refrains and plotted turns of a composer’s brain without the hubris or arrogance that might otherwise keep them at a distance from their people.

As they cram into the back of a Civic outside the shop where two out of the three members work in metallurgy and carpentry to hop on their iPhone to Skype with 20 percent battery left, it fast becomes clear that these Las Rosas dudes not only love each other; they’re in it because this is what makes them happy.

We’re happy to premiere their new music video for “Bad Universe,” directed by Beatriz Sanchez, below, alongside our chat with Las Rosas about Oprah Winfrey, gender fluidity, and the backwards patriarchy of Tostitos queso.

Can you guys hear me?

Jose Boyer: Yeah, it just went to 20 percent battery alert. But now we’re back! It just paused ’cause of the alert.

Jose B: I was thinking about how many in my lifetime, of weed, specifically.

Jose B: Seems like you interpreted it as more of an LSD situation.

“Tostitos queso is a symbol for the backwards patriarchy.”—Jose B.

What needs to be talked out with “Ms. America”?

Jose B: That was two different sort of ideas that got rolled into one. You know how Oprah has O Magazine? I started taking that on the subway a bunch because my ex-girlfriend had a subscription to it. Sometimes Oprah or Dr. Phil or even Gail gives advice, and it struck me as so funny that a lot of people’s go-to advice is Oprah. And Ms. America, to me, is just this iconic woman, you know.

Oprah is your Ms. America?

Jose B: Well, I don’t know…if someone’s Ms. America, this super American lady, Oprah’s’s definitely at least one of the main, living ones.

You used to have an Austin-based band called Harlem, and now you’re in Brooklyn playing music with a Mexicali vibe. Has that inversion ever been something you think about?

Jose B: I feel like in Austin there wasn’t so much of that, as far as I’m aware. Young kids doing something with a Mexican vibe or aesthetic is maybe more of a California thing? Definitely not a New York thing. I don’t see a lot of that here.

Jose A: There are a lot of Mexicans on the 7 train, but not at our shows.

Jose B: Not at Baby’s All Right.

Are you guys named after the Brooklyn funeral home?

Christopher: No, they’re named after us, actually.

Christopher: They get down.

Jose B: We played a show above a funeral home in Switzerland and it was one of the bigger shows of our last tour.

Las Rosas songs like “Boys” and “Black Cherry” both embrace gender fluidity and address how men deal with affection and relationships. Is that something you guys are thinking about on this record, as a theme or an idea?

Jose B: Yeah, interesting, you’re the only person ever to pick up on that. “Black Cherry” is a song I wrote a long time ago, a fictional account of a guy who’s girlfriend leaves him for a girl, and he’s like, “Well, I can’t hate on that, she’s pretty hot.” Then, years later, a similar thing happened to me in my real life. It was so fucking weird. And only her best friend picked up on that. “Boys” was written about that song, and it actually happening. Girls are so ahead of the curve on that stuff, like, “Yeah, let’s be open to new modes in your life,” and guys are struggling to catch up.

Yeah, in small towns when the girl in a relationship goes off to college and experiments, the townie boyfriend is always stuck at home eating chips and Tostitos queso.

Jose B: Totally. Tostitos queso is a symbol for the backwards patriarchy.

“Let’s not put out some random shit that’s on my broken four-track because people love lo-fi. I wasn’t interested in lo-fi except for the fact that you can do it yourself.”—Jose B

Are there rules around what qualifies as legitimate Tex-Mex queso in Austin?

Jose B: I think if you brought Tostitos queso it’d just be like buying frozen pizza in New York or something. Just go get a slice.

But I’ve also heard its a mark of quality to see that little layer of film formed on top of your queso.

Jose B: Yeah, you can’t avoid that, because you have to have Velveta in there, at least a little bit, amongst the real cheeses. Christopher does a cool thing. Tell him what you do with Tostitos queso?

Christopher: What do I do with it?

Jose B: Oh, well I got this from him, maybe it’s just a collaborative thing. We sautéed a bunch of onions, made a thing of black beans, threw in some jalapeños and garlic, dumped a jar of that stuff in there on the pan, cooked it up and simmered it. Dude, try it. So good.

You guys could do what Nimai from Prince Rama does with her vegan recipes and put these up on Instagram while promoting your band on the side and stuff.

Jose B: Oh, that’s cute! Ours would be so much less cute, because we’re not hot and our shit is fake cheese artery blocking stuff.

Jose A: Tostitos to the dome. Not vegan.

So much garage music is about speed of recording and how quickly and cheaply you can churn it out, but it sounds like you guys took your time with this one. The songs are great, but why so long?

Jose B: We were being real picky about how to put it out, but there was definitely a lot of thought into the recording of it. Hey, let’s not put out some random shit that’s on my broken four-track because people love lo-fi. I wasn’t interested in lo-fi except for the fact that you can do it yourself. If I can, I want hi-fi. We got to a point where we knew a cool studio, a good producer, so we said let’s do it.

Jose A: We actually just recorded half of a new record so we can have stuff sooner when we want.

Jose B: Yeah, this next one’s coming down the line fast.

When Ty Segall’s record comes out he’s already got a next one in the can with whatever project, going through the process of being pressed and promoted and distributed..

Jose B: Yeah, that’s really tough to pull off and a lot of it comes down to resources. I had to come down here to talk to you at their job because we all still have to hustle when we’re at home. They’re gonna go back in the shop and keep working, like real men. It’s hard for us to say we’re gonna record in the studio, tour a record…

Jose A: Yeah, we had to do the same thing when we recorded new stuff.

Jose B: With our new stuff, we’re gonna be taking time off work for it and paying for it ourselves, but we’re gonna churn it out fast. We kinda had to crack the whip on ourselves after this record took so long.

“It’s all about the money, that’s why we do this. And the queso.”—Jose A

Taking time to make things sound right is something of a proof of concept for someone to throw you money and know they’re not wasting their investment.

Jose B: Yeah, hopefully this time around people hear us, say, “Wow, they really went for it, this shit sounds pro and they know what they want.” Who knows, we’ll see what happens.

Jose A: It’s all about the money, that’s why we do this. And the queso.

What are you guys building in the shop?

Jose A: I’m a metalworker in a fabrication shop, so I do welding.

Christopher: And I do carpentry, floating all over the place right now.

Do you ever do film or television scenic work?

Christopher: Yeah, but I’m getting out of that racket, because that shit sucks unless you’re unionized. This is my union right here.

Jose B: We have a lot of leverage with worker’s rights.

Where did you guys find that Las Rosas sound? The Desire-era Dylan thing, dude in love, lovesick shit?

Jose B: We like to love. That’s the first time anyone’s ever referred to the Las Rosas sound, so that’s cool.

Where does punk meet paisley for you guys, as a band, a union, as lovers? Where in your hearts?

Jose B: That’s a good question, but maybe not for the back of a Civic. Battery’s at 10 percent.

Jose A: Maybe in the kitchen.

Jose A: Well, in reference to our album title, it also can’t really exist.

Jose B: That’s a good point. We’ve been trying to explain the album title a little bit, and really, it’s just a ridiculous idea that anyone can be in agreement and be happy in every way, an impossible situation. It’s super tongue-in-cheek in that way, and if there’s a theme to the lyrics, if there’s a theme to my internal monologue, it’s, “Everything’s super-relative, and I have a hard time believing any one thing is real for too long.”

Las Rosas play Knitting Factory on April 25 with L.A. Witch, Our Wicked Lady on May 13 with Champagne SuperChillin, and Baby’s All Right on August 17 with The Nude Party 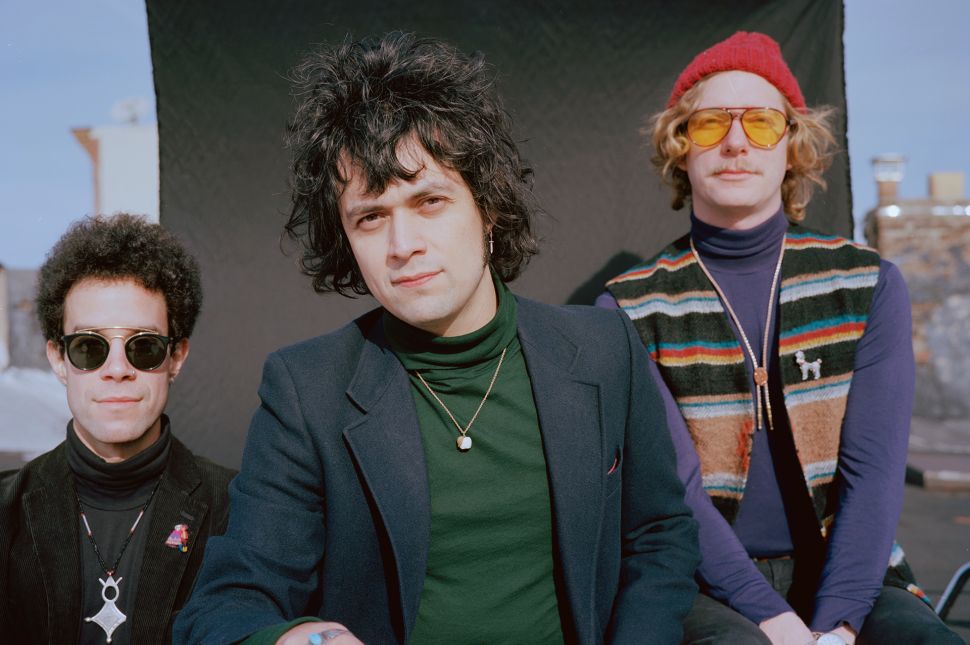