A throwback to the good old days when adventure movies had riveting performances, gorgeous camerawork and the ability to tell stories that made sense, The Lost City of Z holds attention and keeps you fascinated. Written and directed by James Gray, it chronicles the saga and unravels the unsolved mystery of England’s legendary soldier-explorer Col. Percy Fawcett, who devoted his life to the search for a lost city in South America and disappeared forever in 1925 in the Amazonian jungle. The movie has its share of flaws, but you can’t say Charlie Hunnam, who plays the lead, has no charisma, or the story lacks excitement.

It begins in 1906, when the National Geographical Society dispatches Fawcett, then a major, to explore and survey a remote, uncharted corner of Bolivia just south of the Equator. It was there that the major, accompanied by fellow explorer Henry Costin (Robert Pattinson, a former vampire from the Twilight series on TV) finds clay artifacts from another era, indicating life in a city that vanished from history. Set upon by a tribe of vicious, spear-throwing savages, they are forced to turn back, ignoring their native guide’s warning: “I feel sorry for you English—for you, there is no escape.”   Fawcett should have paid closer attention, for two decades later the ominous words came true. But in the ensuing years, the search for the city of Z (called “Zed”) and its archeological wonders became an obsession for Fawcett, who ignored his own responsibility as a husband and father to pursue his dream. By 1911, he convinced Parliament that if he could find this mythical city it would open up a new chapter in human history. Other excursions led to more discoveries, but the war with Germany intervened. The movie temporarily abandons the lush South American jungle for the trenches of war in 1916, but as he grew older, Fawcett even left the men in his charge to fight for king and country. By 1923, having recovered from his wounds, he was thrilled to learn that even though England still thought he was a madman, the Americans had been inspired enough by his passion to begin new expeditions. Now his own son, who had resented his absence from home for years at a time, was intrigued enough to convince his father the search should be resumed, and even persuaded him to take him along as a partner. Financed by a consortium of American newspapers and John D. Rockefeller, Fawcett, now promoted to the rank of colonel, headed back to the Amazon and a destination fraught with unimaginable horrors.   When last seen in the movie, Col. Fawcett and his son Jack are shown captured and roughly dragged into the jungle by a tribe of cannibals.

The arduous journeys are meticulously constructed, although the film plays around with time so much that you don’t always know where the adventurers are at any given time. Fawcett stays away for years at a time, yet every time he returns his wife has a new baby. But the camerawork is awesome and the cast is as resonant and dedicated to the film as the promise of the lost city is to Percy Fawcett. Tom Holland, the new Spider-Man star who made such a strong impact five years ago in The Impossible, as the boy who became a man in the Thailand tsunami, is remarkably strong and self-assured as Fawcett’s devoted son Jack. Sienna Miller doesn’t have much to do as Fawcett’s long-suffering wife Nina, but in her scenes as a woman with an unrequited love for a man more dedicated to adventure than to marriage, she contributes a quiet strength. And Charlie Hunnam, a handsome and resolute young veteran of TV, carries every scene with the same vigor and passion as the man he is playing. An admirable film that sticks to your ribs like a hearty meal, the taste of The Lost City of Z lingers with the port. 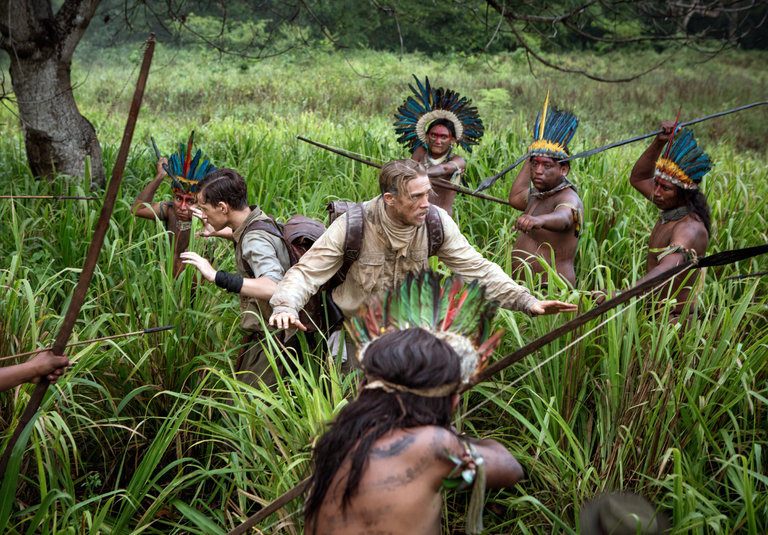