If you could spend an entire flight sitting next to a well-behaved dog, wouldn’t you?

Well, don’t talk to Mark Halperin then. The NBC political talking head was the subject of widespread ridicule this weekend after he complained about sitting next to an adorable Bernedoodle (poodle/Bernese mountain dog mix) named Charlie on a Delta flight:

To his credit, Halperin backpedaled less than 12 hours later when his followers pointed out that the dog may have been a service animal, and dog Twitter began to forgive him:

But the mystery persisted: why was the dog seated next to Halperin instead of his owner?

That's the owner briefly w/ his dog to try to get him settled in dog's own seat pre moving across aisle, where he was inexplicably assigned https://t.co/h701v8ZjK2

Halperin then went on a strange rant, blaming everything from Los Angeles traffic to overhead bin issues for the mix-up:

That's what I did.But b/c of LAX traffic, TSA, redeye logistics & overhead bin issues, I got seated v late; stunned it hadn't been dealt w/ https://t.co/BGZ2NqLdPM

By the time I figured out situation, we were about to taxi, dog on its own, & no one trying to fix it. So of course I offered & switched https://t.co/dJ7PtRejsi

We were abt to take off on redeye. Dog was cute. I was sharing pix & expressing surprise owner/dog hadn't been put 2gether.No time for essay https://t.co/gz4WYJvJGA

So it turned out Halperin’s rationale for posting this widely scrutinized photo was to both delight his Twitter followers with a picture of an adorable canine and point out that Delta was wrong to separate the animal from its owner. Needless to say, his initial two-word tweet didn’t clearly express this:

Yes, that was my original point. Reassign me or someone else so dog/owner could sit together. No need to wait until last minute. https://t.co/nnClTqJl80

But wait, there’s more: it turns out Charlie wasn’t even a support animal to begin with. The dog’s owner, Anthony Pisano,  is a Delta flight attendant who had paid for seats for both him and his dog (he didn’t pull rank like a United Airlines employee did recently).

“Halperin (I had no idea who he was) calls for a flight attendant and tells her that he refuses to sit next to a dog—those were his exact words,” Pisano said. “Next thing you know the lead flight attendant asked if I minded giving Halperin 6A. It was so strange he wouldn’t even look or speak to me about it. I couldn’t believe how rude this guy was, carrying on as I sat right next to him. So I obliged, he moved into 6A and left his shoes and a mess in his little first class cubicle area. I politely brought him his shoes and belongings…he literally looked the other way and that was that.”

To capitalize on the publicity, Pisano created a Twitter account of his own to let Halperin know there were no hard feelings: 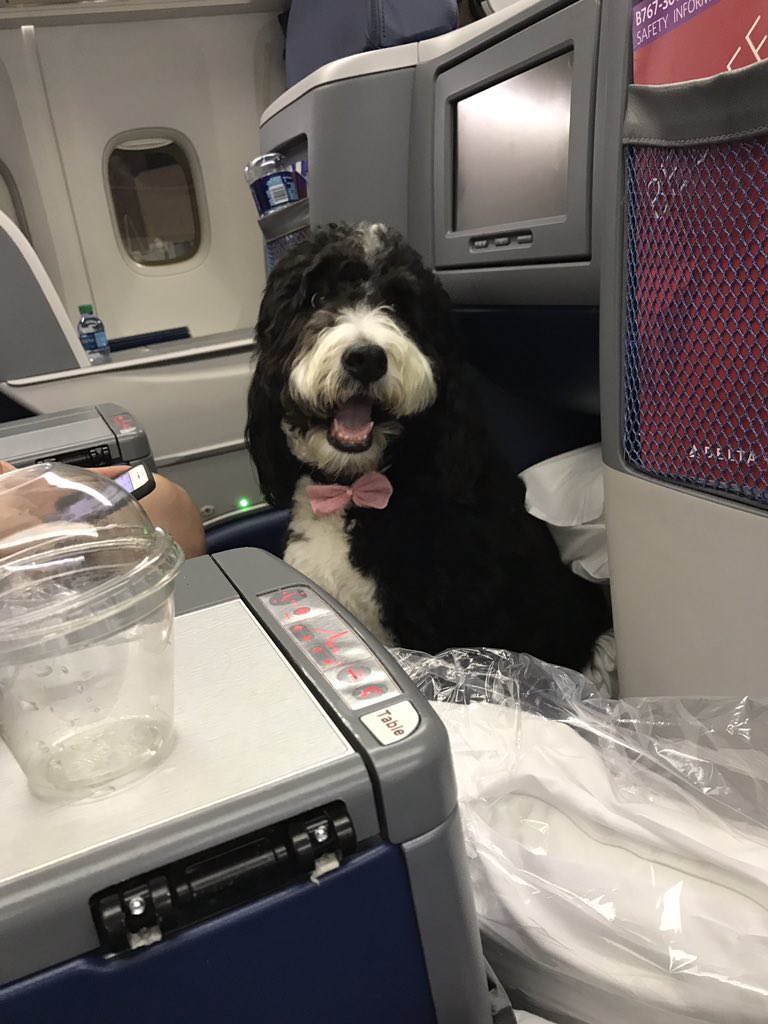