Marvel’s Agents of S.H.I.E.L.D. continues to be an absolute delight to the 12 people currently watching it. I would go on a rant about how more people should be watching it but I mean, if you’re reading this you probably watched the episode so I don’t really have to convince you. I still believe the LMD storyline dragged on a bit much and didn’t have the same action and excitement as the Ghost Rider arc but it seems both storylines are completely justified just because of how well Agents of Hydra is starting off.

“Identity and Change” picks up right after Coulson remembers Daisy’s name. We still get to see a little more of what he’s like in this world. He’s basically a grumpy old teacher that rants about fake news and mind control soap. Because of his inclination to believe conspiracy theories, he’s already pretty on board with the whole “the world is a simulation-thing.” He’s even giddy at the thought of having a robot hand. Him and Daisy/Skye/Quake meet up with Jemma who despite Daisy’s objections, believes can get through to Fitz just as Daisy got through to Coulson. But with no way out of the Framework, they decide to search for Radcliffe who they find out is in the simulation but went missing years ago.

The big return this episode is we finally get to see what Mack has been up to in the Framework and luckily he’s stayed a pretty good guy. In fact, he’s a dad now. He got back his daughter Hope who died in the real world. Hope is a genius and just super adorable. Her and Mack are building drones together but she repurposed some Hydra tech against Mack’s wishes. When they go to get rid of it, they are approached by a surprise Hydra inspection at the bus stop. It’s a tense moment but before they can get caught, one individual makes a run for it and we find out he was a wanted potential Inhuman. They take him away and leave the scene. This leads to a heartbreaking talk between Mack and his daughter about why Inhumans are treated so badly when they have done nothing wrong. Topical, topical, topical.

As for what’s going on with Evil Fitz and Madame Hydra? There’s a little trouble in virtual paradise. First of all, we find out Aida is going by the name Ophelia, which is actually the name used by Ophelia Sarkissian AKA Viper AKA Madame Hydra. First introduced in Captain America #110 (Feb 1969) she’s had a long time history with characters like S.H.I.E.L.D., the X-Men and was even married to Wolverine at one point. But Fitz is pissed off at her because Aida won’t tell him anything about the subversive he was put in charge of tracking down. Hoping to maintain his trust, Aida shows Jemma’s photo to Fitz who doesn’t seem to recognize her and confirms he will continue to look for her. Aida mentions how impressed she is that Fitz will do anything for her and he says that he would travel across the universe for her – an homage to him rescuing Jemma while she was trapped across the universe. Then they kiss. They kiss a lot. It’s tragic really. All Aida had ever wanted was to be human and in this world, she can be. She gets to feel love and emotion and if this world gets shut down, she is left with nothing again. Villains are difficult to truly feel sympathy for but I’m surprised just how much I can understand what Aida must be feeling.

Daisy uses her Hydra clearance to look up the location of Radcliffe and it literally takes like 2 seconds. But I guess no one in the Framework besides Aida would know to look for him. Her and Ward go to leave the Triskelion but May stops them and demands Daisy come with her. Daisy gives the coordinates to Ward and goes with May. Daisy is actually brought into a meeting to track down Jemma so she dodges a bullet there. Fitz is leading the meeting and even says the line, “We will defeat these terrorists and we will make our society great again” ended with a good ol’ “Hail Hydra!” I’m sure that wasn’t another topical reference. They then proceed to head out and storm a home that just so happens to be Mack’s home tying the two storylines together. There’s not much Daisy can do in that scenario except watch Hydra take Mack and his daughter.

Jemma and Coulson, on the other hand, go through a little Deep Throat spy action and are cuffed and bagged and brought to a new location. They run into another familiar face: Jeffrey Mace! Who is all suited up and hasn’t had a clean shave in weeks. He’s the Inhuman leader currently in charge of what remains of S.H.I.E.L.D. and the resistance. Coulson still is a fanboy in this universe and calls Mace “Patriot.” We find out Agent Burrows is still alive in this universe, but Billy Koening (Patton Oswalt) gave his life to protect S.H.I.E.L.D. And no offense, but I’d rather have any of the Koenings than stupid Burrows. There is still some tension between Jemma and Ward but mostly because Jemma still hasn’t shared the fact they are in a simulation with them. He reluctantly gives Jemma the location of Radcliffe though, albeit after having to say everything she’s done for S.H.I.E.L.D. Radcliffe is all the way near Bermuda and Mace doesn’t have a team to dispatch there but Coulson volunteers and Ward agrees to supervise. We get some heart-to-hearts with Jemma. First being Ward saying how upset he is for leaving Daisy (Jemma still isn’t convinced Ward isn’t going to backstab them since that’s all he does) and the second with Coulson who doesn’t feel like he should be there. She tries her best to reassure both of them but you, masculinity is a prison.

Back at Hydra, Fitz is pissed off again at Aida after finding out the subversive he is chasing is supposedly dead. This forces Aida to tell him that Jemma is from the outside world. It seems as if she has brought it up before but Fitz wants to know more about it. She talks about how in her world, S.H.I.E.L.D. won the war and she became their slave. She also mentions Project Looking Glass, which I’m sure we’ll find out more later and is super evil. Daisy interrogates Hope but when she gets to Mack he says he recognizes her. This is huge relief to Daisy who says her and Jemma will help him escape and fix all of this but turns out he was bluffing and was told to say all of that by May! Cue Admiral Ackbar “It’s a trap” meme! Daisy tries to escape but is taken down by May and her Hydra agents. May does let Mack and his Daughter go but only after a disappointed and defeated Mack says, “Hail Hydra.”

Radcliffe is playing croquet on an island and Ward, Jemma and Coulson surround him with weapons loaded. He recognizes all of them and even calls Ward “Hive” because that was the only way he knew him. He spills some secrets like that Aida had figured out a loophole to kill him (which he was impressed by) and that the agents are being held in one of Anton’s Russian bases. Unfortunately they still don’t have a way out o the Framework and he believes Aida must know that they are here right now, which is super correct as a swarm of Hydra ships show up and Aida and Fitz show up with a bunch of Hydra agents in a very cinematic, almost Star Wars manner. During their conversation, Radcliffe calls Madame Hydra “Aida” and that seems to strike a nerve with her. She says how she doesn’t want to be kept in a closet, or to be used, or to be a thing. Fitz demands to know where Jemma is and to get an answer a little faster, they grab Agnes who is shocked to find out Madame Hydra looks exactly like her. Fitz holds her at gunpoint and uses the time to ask some questions about the other reality. Radcliffe tells him that Fitz was like a son to him and tells him about Jemma and how they were in love and brings up that he even travelled the universe for her. While this is going on, Ward has a shot lined up to take Fitz out but Jemma won’t let him and says she loves him but none of Holden’s stories have any effect on Fitz and he shoots Agnes. Jemma screams out and bullets are exchanged and they escape.

Back at S.H.I.E.L.D., Ward and Mace want some answers and Jemma begins to tell them that none of this is real before being interrupted by Mack who shows up and tells them about Daisy. He says he couldn’t look his daughter in the eye after helping Hydra and wants to help them. As for Daisy, she’s locked in a cell, beat up and bruised as Holden Radcliffe screams out in pain a room over. Fitz walks in and says he redid Daisy’s test and found out she’s a potential Inhuman which can’t be good. I wrote down “Fitz is a bad boy” in my notes but didn’t know where to put it so I’m just going to awkwardly tack it on to the last paragraph like this. Until next time, True Believers! 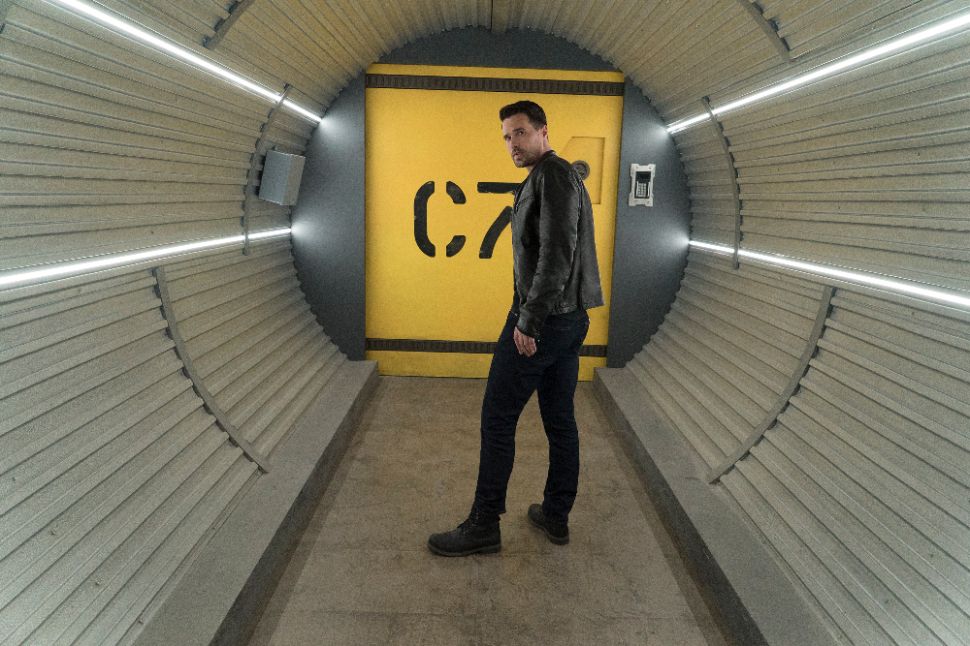