Melania Trump steps off Air Force One in her Easter dress. Getty Images

Though she might not have as much fashionable clout as Michelle Obama, first lady Melania Trump has been stepping up her sartorial game as of late. From the $10k Michael Kors suit she wore to the Joint Session of Congress to the symbolic green outfit she wore to meet King Abdullah II of Jordan and his wife, Queen Rania, now she’s even turned Easter into a big fashion event.

On Sunday, the Trump family attended Easter service at Episcopal Church of Bethesda-by-the-Sea, not far from the Mar-A-Lago estate in Palm Beach. In fact, this is the same church where the Trumps married in 2005. For this year’s service, FLOTUS donned an airy white dress with a bias-cut, accessorized with sky-high Francesco Russo neon pink heels and a delicate gold belt. Tiffany Trump and her boyfriend, Ross Mechanic, were also on hand for the church visit; the first daughter, too, wore a white dress.

Tiffany Trump in a white dress for Easter. Getty Images

For the 139th Annual Easter Egg Roll at the White House on Monday, which was precluded by quite a bit of drama, Trump went for a less voluminous look. Instead, she opted for a slim pink ankle-grazing shift dress, custom designed by Hervé Pierre. The pastel tulle frock was paired with some sensible pointy-toe pink flats, which are far superior to stilettos, at least when it comes to events held on grassy lawns.

The Easter Egg Roll is one of the biggest events hosted by the First Lady. Compared to previous years, this was a subdued soirée, with only 21,000 attendees and just 18,000 wooden eggs. Egg Rolls under the Obama administration were far bigger and buzzier, featuring live performances by Justin Bieber and Idina Menzel and celeb appearances by Shonda Rhimes, Christian Bale, Bear Grylls and Shaquille O’Neal, but that was not the goal for 2017. According to Stephanie Grisham, Trump’s spokeswoman, the daytime party was toned down this year because the first lady was concerned that a larger event would lead to longer lines for attendees. This year, she wanted to return to the more traditional aspect of the affair.

As such, Trump read Kathie Lee Gifford’s children’s book, Party Animals, to the pastel-clad crowd, but there were also egg rolling competitions, egg hunts, cookie decorating stations, letter writing to the troops and a Minecraft coding station, sponsored by Microsoft. The first lady also had to nudge President Trump, to remind him to put his hand over his heart during the National Anthem.

Trump, however, wasn’t the only notable attendee wearing pink to the family-friendly affair, as Kellyanne Conway wore the same exact color scheme, though she paired her sparkly pink dress with nude pumps. 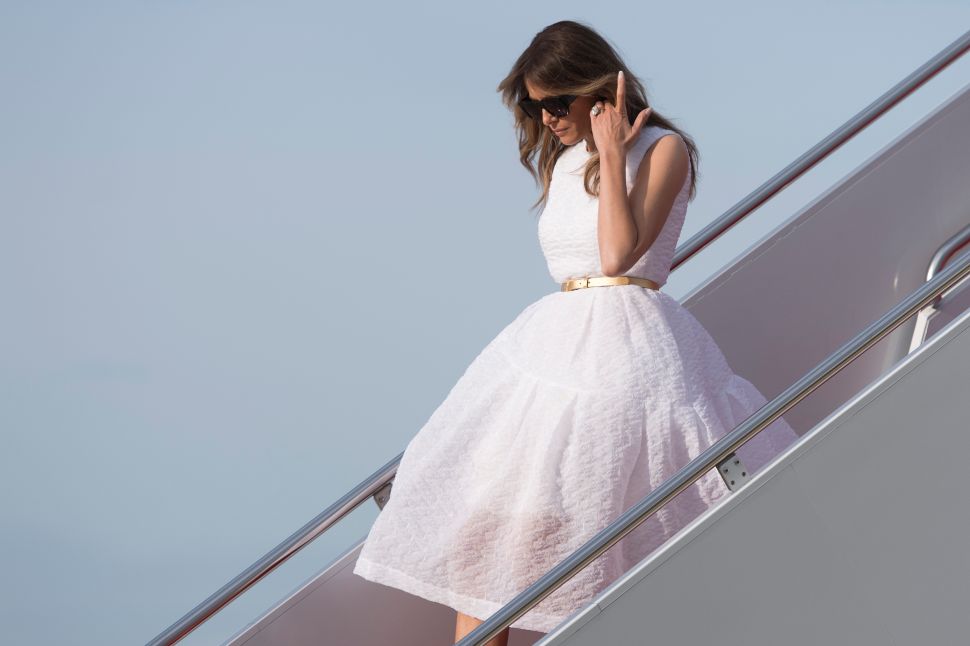