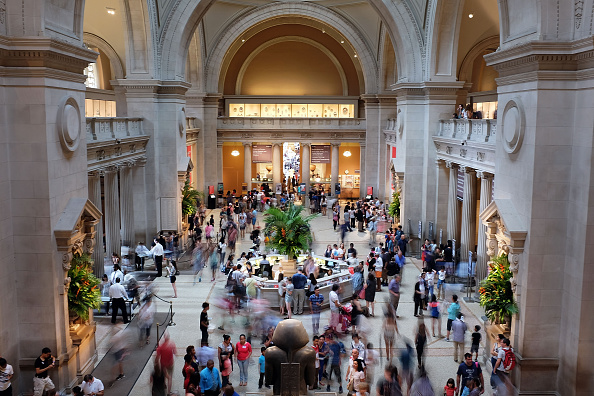 The Great Hall at the Metropolitan Museum of Art. Spencer Platt/Getty Images

Scandal continues to consume the Metropolitan Museum of Art, with an “inappropriate relationship” between recently-resigned director Thomas Campbell and a fellow Met employee revealed in the Sunday New York Times.

Campbell, who left his post in late February following other accusations of mismanagement at the country’s largest art museum, reportedly for years carried on a relationship, the nature of which was not specified, with the woman, which some staffers say interfered with their ability to do their jobs.

The woman, whose name is not given, was provided funds for projects out of balance with other staffers’ budgets as well as responsibilities “well beyond her rank,” according to Met employees cited in the Times report. The relationship resulted in at least two staffers leaving, one after reaching a settlement for more than $180,000 with management over her unspecified complaints.

Of course, what work environment isn’t replete with angry staffers, leaving in rages after ego and interpersonal dust-ups? It’s more that how the institution dealt with the complaints—first by ignoring them, then trying to sweep them under the rug—reflects larger issues at the Met, the paper said.

“The Met is largely run by a dozen or so executives and trustees…with little transparency or accountability,” the report said. The board and its powerful committees have not faced issues head on, partly due to a culture of deference and avoidance. “Few people have spoken up in a meeting for about 40 years,” one trustee of the Met told the Times.

Real estate developer Daniel Brodsky, who became chairman of the Met board in 2011, defended the museum’s handling of the case with the sizable settlement to the paper in the statement below:

“The board is deeply committed to ensuring a professional workplace, and one that is free of favoritism of any kind. While we believe, in this case, that the board responded appropriately by ordering an investigation by independent, external experts — which concluded [the departed staffer]’s complaint was without merit — there is more we can do.”

What that “more” will be remains to be seen. It’s not easy to change an established workplace culture. And if it were illegal to host a poisonous and ineffective one, many, many firms would be in trouble.