A Brooklyn affordable housing development called Marcus Garvey Village will be largely solar-powered soon. Work began on the new power supply last week, according to Solar Builder Magazine. Because the homes will generate power on site, its wiring will be re-engineered into what’s called a microgrid. That is, it will be connected to the larger power grid, but it can also shut off its connection to the local utility, relying only on its solar panels and power stored in its on-site lithium-ion batteries.

For almost as long as civilization has been electrified, power has been provided by centralized utilities, but there’s a growing sense that microgrids both save money and ensure that critical infrastructure remains operational in emergencies. New York just announced $15.5 million in funding for energy storage projects, a key component for microgrids (so that, for example, solar power can still be used even if no one is home when the sun is shining). Advocates for switching to renewable sources of energy have long counted on microgrids to make that more feasible.

The Brooklyn housing development would be a case in point, but new research out of the University of Southern California at San Diego published in Energy Policy suggests that broad deployment of microgrids could slow down the elimination of fossil fuels from our economy.

Lead researcher Ryan Hanna explained to the Observer in a phone call that he became interested in studying the economics of microgrids as he saw a greater interest and support for microgrid investment among industry analysts and investors.

Using a wide array of variables such as electricity cost, sunshine and the capital cost of installing power generation, the group modeled three different potential microgrid customers: a large commercial building, a piece of critical infrastructure (such as a hospital) and a campus. They limited their models to California, which has some of the most expensive electricity in the country.

The more expensive electricity is, the more likely it makes sense to build a local power source. Additionally, facilities with needs for heating and cooling are more likely to benefit from microgrids with natural gas than those that do not need to manage temperature as much.

What did they find?

Microgrids make sense, even if all a landowner wants to do is save money.

“Under current settings in Southern California, these systems are profitable,” Hanna told us. That even factors in the cost of building the microgrid. When you amortize the initial investment across the life of the system, it saves the developer money in the first year.

Profits aren’t the only reason to re-engineer a power supply to generate its own power. After Superstorm Sandy, NJ Transit announced a plan to put some of its trains on a microgrid so that they could continue to run even if the transit agency lost its connection to the grid.

There are a lot of variables that go into determining how much sense a microgrid makes, such as the price of electricity, the price of gas, surcharges or discounts on electricity based on demand and the cost of large scale batteries. Regardless, though, the researchers found a strong preference for using natural gas to provide the base of electric power in each case it modeled.

And that preference, Hanna said, is robust. Even if a carbon tax were imposed, for example, natural gas is still likely to remain a key component of any microgrid.

So will the planet burn to a crisp?

Each case that Hanna modeled also showed solar working well as a solution for peak demand (though natural gas still covers the base power), which would seem like it represents progress toward reducing society’s demand for fossil fuels, but Hanna said it was insufficient.

“It’s not going to save us from the worst effects of climate change,” Hanna argued. “If you look at what’s actually required to stay within the least damaging effects of global warming, we need to act fast. In fact, exponentially.”

Hanna contends that every new customer for natural gas at scale will make it that much harder to attain a zero-carbon future. “What you might see is a gas lock-in, where you have lots of very small gas generator systems that are hard to manage,” Hanna said.

Timothy Hade of Scale Microgrid Solutions questioned the premise. “No one at any national level across the world has said that de-carbonization equals zero carbon,” Hade told the Observer in a phone call.

Hade’s company consults on micogrid projects with the goal of streamlining the process so it can lower the costs of microgrid installations by reducing the soft costs, such as engineering and design, as we previously reported.

Hade said that the goals of the Paris climate agreement focus on three points: reining in the total increase in global average temperatures, adapting to a future with more severe weather and financing the transition. “There is not a pragmatic path to zero carbon in the near term,” Hade said. There is a path to increasing the amount of renewables on each microgrid project and hastening the spread of these distributed electrical systems, but it requires creating a market.

For example, every microgrid with solar needs batteries. Batteries are expensive. The more batteries that get sold, the more the industry scales and the less batteries cost. That makes it slightly easier for the next developer to get on board with microgrids.

Today, creating that market depends on starting with gas to provide the base of power. “Doing gas microgrids today is the pathway to zero carbon microgrids in the future,” Hade said. “If you ban gas, you ban microgrids.” 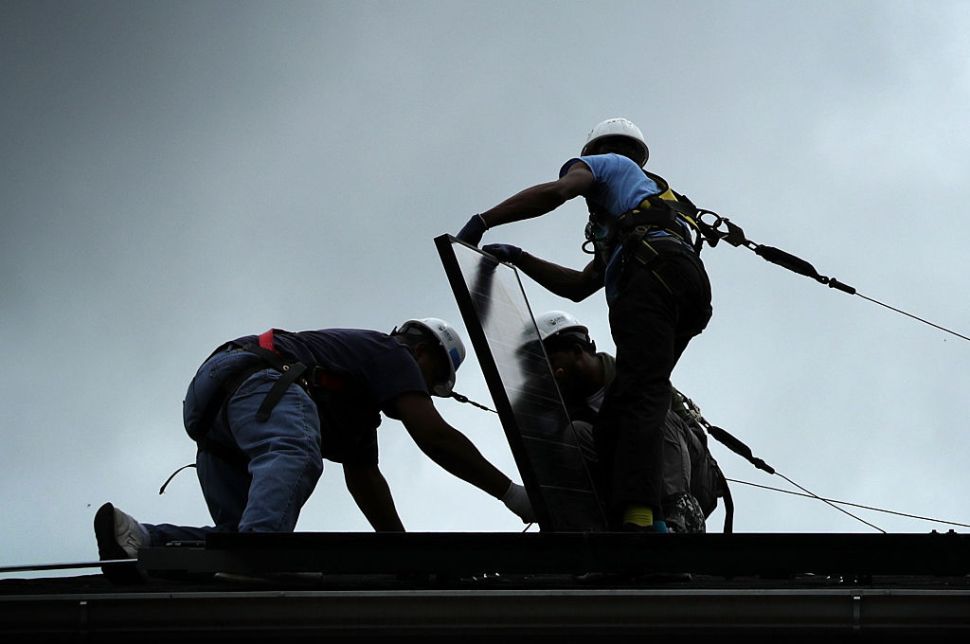