If you break down any random modern season of the Challenge to its very essence, distil it all the way to its simplest form, there are really only three outcomes. It’s like how there are only really three basic plots and every story is one them and Grey’s Anatomy has done them each one hundred times in three hundred episodes.

Last night, Johnny Bananas was eliminated. It didn’t involve a rookie revolt. Or a betrayal. It was a clash of the titans-like battle exuding more effort than when Hollywood tried to make Sam Worthington a star. I mean Terminator Salvation? Avatar? Clash of the Titans? Stop trying to make Sam Worthington a thing. Johnny lost to Darrell, the second most winningest player after himself. It was a good elimination. And now Johnny is gone. The game is wide open—it’s the best outcome.

Laurel faced off against Cara Maria in the battle for Nicole’s attention. Cara Maria got in one great “wrap-around Laurel’s neck and hang” but Laurel did Cara like tin foil over the metal on the box of tin foil. The thing I can never understand about these shows is how you’re basically living your life inside a giant box of receipts. Nicole has clearly, time and again, said publicly and privately (on camera) that she likes Cara better. Now Cara is gone. Laurel knows that Nicole is basically playing Designated Survivor and she’s Kiefer Sutherland. Nicole can talk her way out of that in real time because you can’t examine the tape. But how do you do that knowing there is video footage of the opposite? I understand gameplay lying. Its strategy and you’re trying to win—whatev. But hookup lying feels extra dirty. I mean if you’re just trying to get that butt and bounce then I guess you don’t care. It’s not a good look though.

Speaking of “getting the butt and bouncing,” Hunter aka Mr. I’d Never “F” A Girl I Didn’t Love…Yeah I “F’d” Ashley, is getting trashed by drunk shirtless OG Shane for breaking things off with Ashley. Shane is like that townie kid at your college who was at orientation with your older brother ten years earlier and then your brother graduated and time spanned and you enrolled and now Shane is your friend who can give you advice about the local scene and can get you into any bar because he manages the coffee shop during the day and promotes at night and he’s turning 33 on Sunday and there’s a party at Revival and you should totally come and bring all your freshman dorm just say ‘Shane-O’s treinta y tres’ at the door.” Hunter aka Mr. Who Can Beat Me, Nobody Can Beat Me But Me And I Will Never Lose wants everyone to know that he did not play Ashley, who has a broken heart and every time Shane brings up Hunter, it breaks again. Poor Ashley, who is hella-rough around the edges but damn it if she didn’t turn three episodes of Real World: Ex-plosion into being an entertaining key repeat Challenge participant.

So Hunter is convinced that nobody can beat him, probably because his arms are the size of really big arms and well, they put the asterisk on the Barry Bonds ball because of steroids and Hunter used to play semi-pro baseball and I’m just going to leave these two totally unrelated pieces of information here and walk away coughing *cough, cough* sorry, there is something caught in my throat. What I really want to mention is that every second of CT screen time we get is a gift and when Hunter’s screaming on the bus about how nobody can beat him, CT pops up in the background like that lady in front of David Robinson and is like “I can, I can.” It’s two seconds and it’s the best part of the whole episode. We’re never getting the old CT back, which is fine. I’m happy that he is happy. Dad-CT is like when a movie hits big and is beloved by fans and then a decade later they make a sequel and they need to get the star in there but he can’t have a huge role except he has to show up because the audience will love it. Basically, CT is Johnny Castle aka Patrick Swayze in Dirty Dancing and Dad-CT is Patrick Swayze in Dirty Dancing: Havana Nights.

No elimination this week and actually TJ wants to throw everyone a party—nothing weird about that? Except Dad-CT which now stands for C(as)T(le) knows this is WEIRD. But everyone gets lit and then TJ crashes and announces there will be an Underdogs bloodbath which is due because there are four Champs left and I think the Underdogs have more people than when the show originally started like somehow half the gangs from The Warriors are on that team now along with the entire cast of Big Brother season 9 and the extras from the Battle of Atlanta scene in Gone With the Wind. I really hope that this ends up being an individual final and so this bloodbath will go a long way to getting us close to that. And with Johnny out, well it’s probably still Darrell’s game. It’ll be fun though. 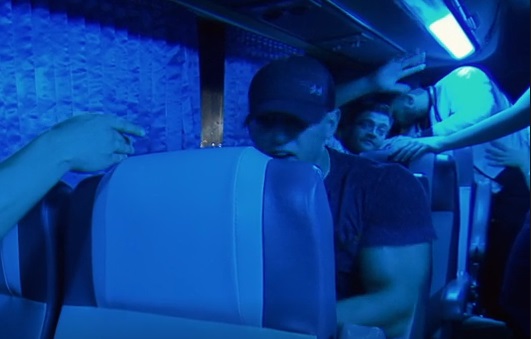