Underdog bloodbath. Underdog blood bath. Under dog blood bath. The 2-4 most beautiful words that could have been spoken came sailing out of TJ Lavin’s mouth like Bill Murray strapped to the bow of that boat in What About Bob?. It is time to get rid of some of these Underdogs. There are more Underdogs than when this season started. It feels like for every player the Champions have eliminated, the Underdogs have added someone. They’re like a hydra of Real World roommates. Cut off a Bruno and two Dustins grow in its place. But it has all been building to this bloodbath. The set-up of giving the Underdogs more players when the Champions joined the game. The forced-alternating week eliminations despite who wins the challenge. Last week’s no-Underdog elimination pass. Those Russell Crowe-imagining-Paul Bettany beautiful minds behind this show had a plan all along. And now we get to see that pay off.

All of the Underdogs are kind of shook. Nobody wants to be the blood in the bloodbath. Not Nelson, not Hunter. Probably not Cory, but he’s kind of busy making out with Camila. Shane has his strategy on lock. Play weak, act strong. And we get a clip real of Dad-CT running through catchphrases: “Don’t stand on the tracks when the train’s coming through, CHOO CHOOOOOO,” “smash his face and eat it,” it’s too bad we couldn’t get a little “pepper and sauce, why you rubbernecking?” in there. Seriously though, Shane the wily vet has put on a clinic of how to use strategy to get through a season. People slept on him because he’s done five and never won, which is the perfect way of portraying your strength as a weakness. Having a ton of Challenge experience is a huge advantage. But if you can get everyone to feel like “he’s done this before and hasn’t won, so he probably can’t” then you are so set up. Just because you haven’t won yet, doesn’t mean you won’t.

The slaughter starts off with the guys tied to a big X. They have to scoop their puzzle pieces up while the momentum of all of them tugging at it whips them around like those early rehearsals for Spider-man on Broadway when like six actors had to be replaced due to wire-related injuries. After they get their pieces, they have to do a puzzle which is Soduko but Darrell calls it Sodoodoo because Darrell is the greatest of all time. If you come in last, you’re out. You’re the blood and the bath. The other three get to fight it out in the first three-way elimination. And thank god for television editing because it takes them two hours to do the puzzle. No exaggeration. Darrell’s back was cramping from how long he was standing there. Fortunately, CT’s impression of Hunter not being able to do math made the wait worthwhile. Unfortunately, the man who was to be unbeatable, Hunter, came in last and had to go home.

Then Amanda, Nicole, Ashley, and Jenna had their turn to go. It didn’t take them as long. Even though Jenna said she was good at math, she took the longest and was eliminated. It’s the first time she didn’t make the final. Nicole managed to pull off the upset as even her new hookup Laurel thought she was going to lose. Amanda finished first and celebrated by giving everyone she doesn’t like (so pretty much everyone) the finger. This is important because, in the elimination round, she still lost. So don’t celebrate until you win, as Darrell would say. The elimination round was a three-way tug-of-war that Ashley was losing badly at. It went on and on and on like an Erykah Badu song. Then Ashley convinced Amanda to work with her to make sure Nicole didn’t win. So they both pulled their ropes in a new direction, which happened to allow Ashley to ring her bell. Nicole was heated since they teamed up on her and she swore that she’d take Amanda out. The final round was one-on-one, Nicole vs. Amanda. They had to tug-of-war the other outside the ring. Nicole won the first by being stronger. Amanda won the second with a better strategy. And Nicole won the third by crawling backward on her stomach until her feet reached the outside. Amanda’s plan technically backfired since helping Ashley is what led to her being out.

The guys were up next. Cory and Nelson had a plan. But Nelson also had a plan with Shane. When the air horn sounded, Nelson blew off both plans and made a beeline for his bell. He rang it in like five seconds. It was actually amazingly impressive. Except Cory was pissed. And Shane knew what to do so he egged it on that Nelson backstabbed Cory. The final shot of the episode is Cory pushing Nelson and Nelson looking like he’s going to throw a punch. Fade to black. I don’t think anyone has ever been kicked off for fighting in an elimination. But with the final about to start, the stakes are so high here. Old man Shane strikes again! 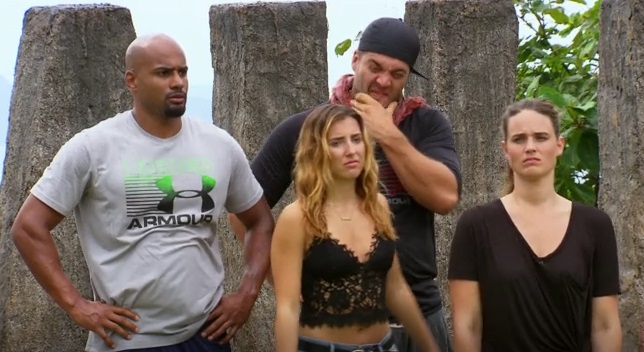