If an episode of the Challenge ever ends with a fight, as last week’s episode did, it is important to remember that there is most likely going to be no fight. It’s a perfect little trick that the show runners use which gets me every time, over and over again like Bill Murray taking piano lessons in Groundhog Day. Last week, it looked like Cory and Nelson were going to rumble, leaving an opening for Shane to manipulate his way into the final. But that’s just good editing. Cory and Nelson didn’t scrap and Cory beat Shane in the one-on-one, cementing the Underdog final four to Cory, Nelson, Nicole, and Ashley. We still don’t know how the final is going to work but I was really hoping this would become a team four-on-four final with the Champs going against the Underdogs. I still don’t know how it’s going to play out but there will be no teams. There’s still another Champs elimination.

Why? Why are they doing this to me? Maybe there are two types of Challenge fans? Those who want to see great eliminations and those who want to see great finals. If you care about awesome eliminations, I could see how forcing the Champs to eliminate each other would be good for you. Certainly, the Cara vs. Laurel one was great from both a storyline and competition angle. But for me, I want to see the players I love make it to the end and fight it out with a chance to win. I want Darrell and CT and Laurel and Camila to go to the end. But this isn’t about me. If it was, Isaac would be back for sure.

I will say that I’m happy about which Champs made it this far. Dad-CT is a revelation. He told Camila that he felt like he got his second wind, which to a normal human being would be the equivalent of seven or eight winds. He just consistently seems like he’s in a good mood. Like when he was egging on the “Laurel-hid-Nicole’s peanut butter” bit at the pool. We’ve seen CT instigate earnestly but this just felt like some good old-fashioned fun.

The challenge this week was a series of chain-link rooms connected as a maze with concrete cinderblocks and coconuts and other stuff blocking the doorways. It was basically like the movie Labyrinth without the goblin puppets and David Bowie’s problematic love for a teen. The Underdogs pulled off the win because Laurel and Camila kept yelling at each other about whether or not they should be paying attention to what the Underdogs were doing. Despite all their rage, they were still just rats in a cage, who didn’t win an extra $30,000. Since these challenges don’t lead to who goes into elimination, they only bank money, the Underdogs have racked up $85,000 to the Champs $25,000. Or course, the Underdogs have had more people the entire show until this week. And also, I literally don’t care if the winner of the show gets $200K or $221,250 because those are all just numbers to me and save the math for the mathletes, not the challenge champs.

Laurel, who is undefeated in eliminations had to face off against Camila, who I think would actually die before she gave up on anything and even then she’d come back as a ghost and haunt you forever until she finally won in the end. They were playing Knot So Fast, which is a classic elimination and very fun to watch. You spend ten minutes climbing around this jungle gym making knots and then you switch and have to undo your opponent’s knots first. I like this elimination because 1) you forget how heavy that length of thick rope really is 2) the only thing more fun than being an adult on a jungle gym is being an adult on a trampoline or a pool or jumping into a pool from a trampoline. Laurel’s 9-0 record went down because Camila is a human drill that can cut through anything in her way like if they ever do a sequel to Armageddon, they can just send Ben Affleck up to destroy the meteor with Camila and then he can spend the rest of the time doing the animal cracker scene with Liv Tyler’s stomach.

CT and Darrell had to face off next but off course we’re not going to find out who won until next week because Production is a cruel beast that feels like they need to keep us in suspense even though I would watch next week if it was just Ashley talking into the camera about being a “meatetarian” for an hour. It looks like there’s only room for six in the final, which I imagine is starting next week. I hope it’ll be at least be every person for themselves so we can get a true champion crowned here. 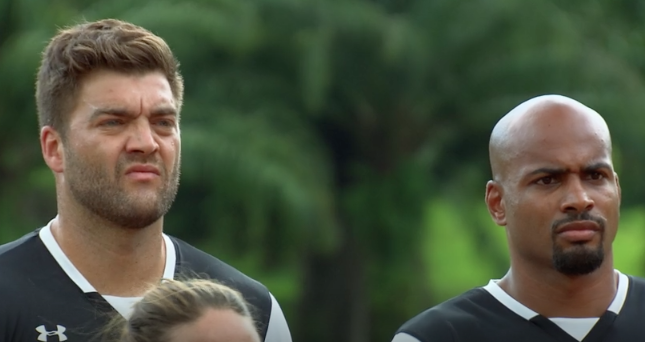