In his budget blueprint for 2018, the administration called for eliminating all outlays for the National Endowment for the Arts, the National Endowment for the Humanities, the Corporation for Public Broadcasting and the Institute of Museum and Library Services. The proposed budget increases defense and security spending by $54 billion overall, primarily by reallocating money away from domestic programs.

The Democratic lawmaker highlighted Trump’s aggressive immigration enforcement agenda, his two attempts to bar travel from several majority-Muslim countries, his decision to rescind federal rules requiring public schools to allow transgender youth to use the restroom of their choice and his failed attempt to repeal and replace former President Barack Obama’s Affordable Care Act. Each of those policy moves has provoked mass protest—and Van Bramer asserted the same response should greet his efforts to defund the arts.

“He has come for artists and the cultural community today but first, the president came after Mexicans, then Muslims, then immigrants—including the undocumented—then it was the trans youth of our country, then the health of millions of Americans with Trumpcare and now he comes for us,” he said. “But he was defeated on Trumpcare, wasn’t he? Because of rallies just like this. People taking to the streets saying that we will not accept this, this is not who we are. We are better than this.”

Tom Finkelpearl, commissioner of the city’s Department of Cultural Affairs, argued that mayors of all party affiliations would lobby to get the allocations for the humanities maintained.

“[Rudy Giuliani had] a vibrant arts and culture budget,” Finkelpearl said. “We had a Republican, we had a moderate mayor named Mike Bloomberg who had a vibrant cultural budget and we have a progressive mayor that I work for that I’m happy to work for today who, with the City Council, created the largest cultural budget in any city ever in America.”

The NEA and NEH each have a $148 million annual budget. New York City organizations received roughly $15 million from NEA, $11 million from NEH and $4 million from IMLS for fiscal year 2016, with CPB supporting public media stations serving the city with more than $20 million in funds.

And a recent report by Comptroller Scott Stringer’s office found that the city received $233.2 million in NEA funding from 2000 to 2016, with some 419 cultural nonprofit organizations getting funding in 2016.

Rally participants included the Actors’ Equity Association, the presidents of the Queens Library system, the New York Public Library and the Brooklyn Public Library as well as the heads of Actor’s Equity, WNET, Local 802 Musicians and the Studio Museum of Harlem. Celebrities made an appearance too, including 1970s band Talking Heads’ lead singer David Byrne, actress Ciara Renée and Jelani Remy, who plays Simba in Disney’s “The Lion King,” also spoke at the rally.

Renée said that the arts is a “collaboration of what is with what can be” and a “connection to something higher and more powerful than any stagnation or destruction and abundance, a surplus.”

“Does that sound bad to you?” she said. “So it’s a wonder why the powers that be wanna take an ax to it, stop it in its tracks when it’s already placed at the bottom of the totem pole of existence?”

“I came here at the age of 18, but my mother made it a point to take us to museums, to take us to the theater,” Mark-Viverito said. “Art and culture enhanced my life, gave me a perspective, an understanding of the world we live in, of our collective wellbeing, that we are not in this alone. That we can reach across the aisle and learn about other cultures, create a sense of understanding and camaraderie.”

Over the weekend, Sen. Kirsten Gillibrand and New York leaders called on Congress to reject Trump’s budget proposal and save the arts. 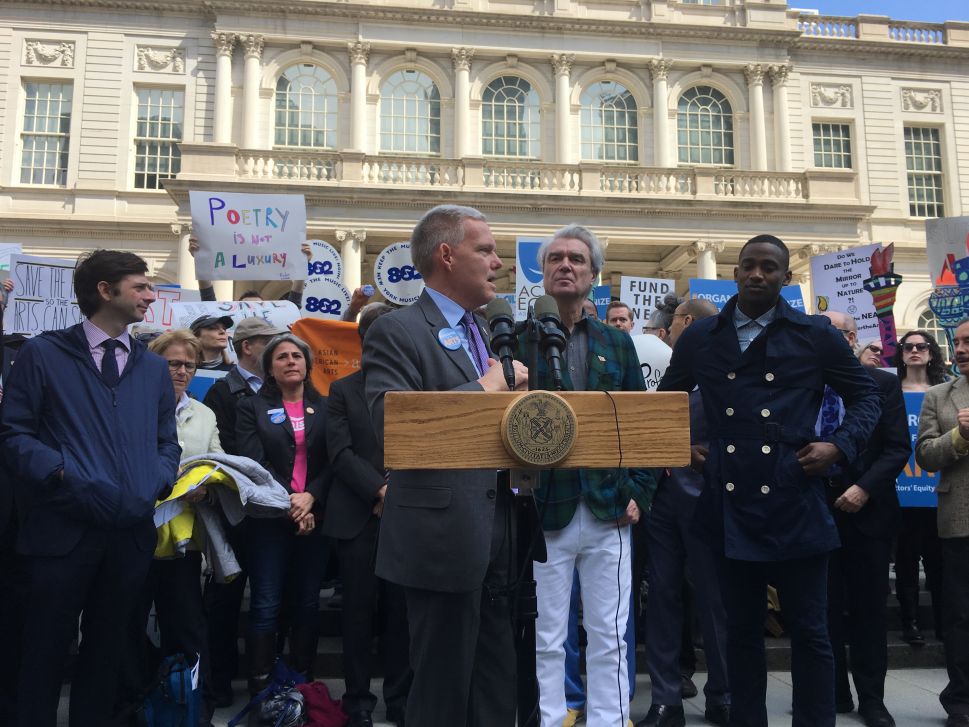