For months, Senate Democrats have pettily blocked President Donald Trump’s first Supreme Court nominee. Not because Gorsuch is unqualified or some kind of horrible extremist, but because the Left is bitter that President Barack Obama didn’t get a third Supreme Court pick to replace Justice Antonin Scalia.

Blocking Gorsuch was a sign from Democrats that they plan to block anything and everything from Republicans out of spite—not for ideological reasons. They gave the GOP no choice but to expand former Senate Majority Leader Harry Reid’s use of the “nuclear option.”

Reid used this back in 2013 to stop Republicans blocking Obama’s lower court nominees. Republicans agreed to confirm Obama’s appointees to avoid using the nuclear option, but at the last minute Reid demanded that they also agree not to filibuster any of Obama’s future appointees, which would have given the former president carte blanche to transforming the government in his image. Republicans couldn’t accept that, and Reid invoked the nuclear option, knowing most in the media would never report the real story.

Democrats agreed to no such thing with Republicans. They wouldn’t agree to stop the filibuster of Gorsuch to avoid expanding the nuclear option. Republicans, sadly, had to do this to keep the Supreme Court from only having eight judges for the next four to eight years. The fact that Democrats didn’t agree to end their filibuster gives credence to the Federalist’s David Harsanyi’s argument that perhaps Democrats wanted this all along.

Republicans attempted to end debate on Gorsuch and proceed to a confirmation vote by invoking cloture, but the first vote failed 55-45. Just a few Democrats joined Republicans to end debate, but 60 votes were needed. This gave Republicans two options: Let Gorsuch’s nomination die or use the nuclear option.

Letting Gorsuch fail wouldn’t have accomplished anything, as there was no guarantee that Democrats wouldn’t do the exact same thing for Trump’s next nominee. The nuclear option may have been the only option, even if it is unpalatable.

A second cloture vote also failed, 55-45, before Republicans used the nuclear option. The cloture vote then passed, 55-45, since it didn’t need to cross the 60-vote threshold.

This paves the way for Gorsuch’s confirmation. If the 55-45 vote carries over to his final nomination, he will be appointed to the Supreme Court with the lowest number of votes since Clarence Thomas in 1991. He may tie Thomas’ vote if no Democrats decide to vote for him Friday evening, when the final vote is scheduled.

Gorsuch is now on track to become a Supreme Court justice, despite a desperate last-minute attack from the left claiming he plagiarized parts of his 2006 book, The Future of Assisted Suicide and Euthanasia. Buzzfeed initially reported the “scandal,” followed by Politico, who made their feature, “Gorsuch’s writings borrow from other authors” the top story on the website.

The title itself wasn’t even scary. Writings frequently borrow from each other, and there’s nothing wrong with that. Completely lifting from other authors without citing (which is not what Politico’s title suggested), is wrong. It seems pretty clear Politico knew the story was thin since they couldn’t even come up with a click-bait title.

Still, the charges were absurd. Gorsuch used a very technical description for an area he was not an expert in as part of his book. The author of the original passage has released a statement saying Gorsuch did nothing wrong.

“Given that these passages both describe the basic facts of the case, it would have been awkward and difficult for Judge Gorsuch to have used different language,” said attorney Abigail Lawlis Kuzma, who wrote the original passage in a 1984 Indian Law Journal article.

“[I]n my opinion, none of the allegations has any substance or justification. In all the instances mentioned, Neil Gorsuch’s writing and citing was easily and well within the proper and accepted standards of scholarly research and writing in the field of study in which he and I work,” he said.

Of course this didn’t stop other leftist outlets from parroting the accusations in an attempt to tarnish Gorsuch.

Gorsuch’s book was 130,000 words long. The passage being attacked was 300 words, and the woman who wrote the original passage thinks he did nothing wrong. Did Democrats really think this would sink Gorsuch?

Gorsuch’s final vote is scheduled for Friday evening, Democrats would have to come up with a lot more than trumped up plagiarism charges and “but, but, but, Merrick Garland” arguments to keep him from becoming the next justice on the Supreme Court. 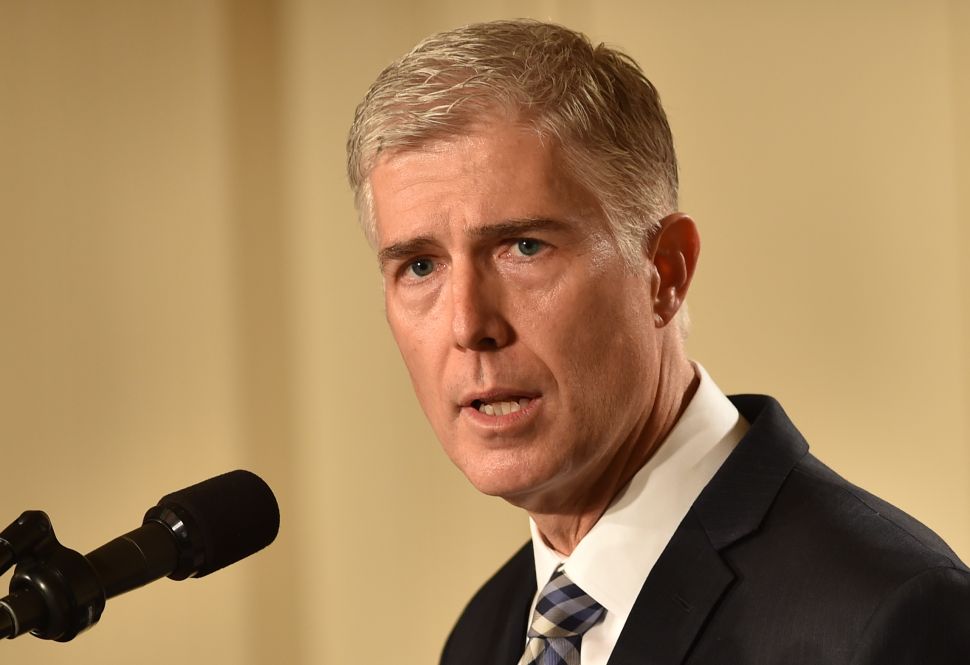