On April 27, 2017, British security forces thwarted a second terrorist attack on the Palace of Westminster by sending in armed police. The attempted attack was virtually identical to the one that cost PC Keith Palmer his life last month—except this time armed police intervened, and no one was hurt.

As previously reported, the last attacker was able to stab PC Palmer multiple times because Palmer was unarmed. Palmer was a retired soldier from the Royal Artillery, making him highly skilled with a variety of powerful weapons.

In the end, Khalid Masood was shot by bodyguards to Defense Secretary Michael Fallon, who were at Parliament by chance. This led to fears that Masood could have killed dozens of politicians due to the shortage of armed police in Westminster. He came within yards of Prime Minister Theresa May’s Parliamentary office, forcing her to be evacuated.

In the aftermath of the attack, armed police were deployed at every gate to Parliament and street patrols were increased. This new strategy has already paid off; the man arrested yesterday was in the same area as Masood and was carrying a bag full of knives.

He was close to the back entrance of Parliament that was—until recently—regularly patrolled by just one unarmed guard. Since the death of PC Palmer, armed police have patrolled this gate.

Officers are currently holding the 27-year-old they arrested yesterday and have issued a statement explaining that the man was taken into custody on Parliament Street at the junction with Parliament Square “following a stop and search as part of an ongoing operation.”

The statement added, “The man was arrested on suspicion of possession of an offensive weapon and on suspicion of the commission, preparation and instigation of acts of terrorism. Knives have been recovered from him. Detectives from the counter-terrorism command are continuing their investigation, and as a result of this arrest there is no immediate known threat.”

Armed police have also raided houses in London and Kent as part of another unrelated terrorist investigation. One woman in her twenties was shot shortly before 7pm (BST) on Thursday, and a total of six people have been arrested so far. 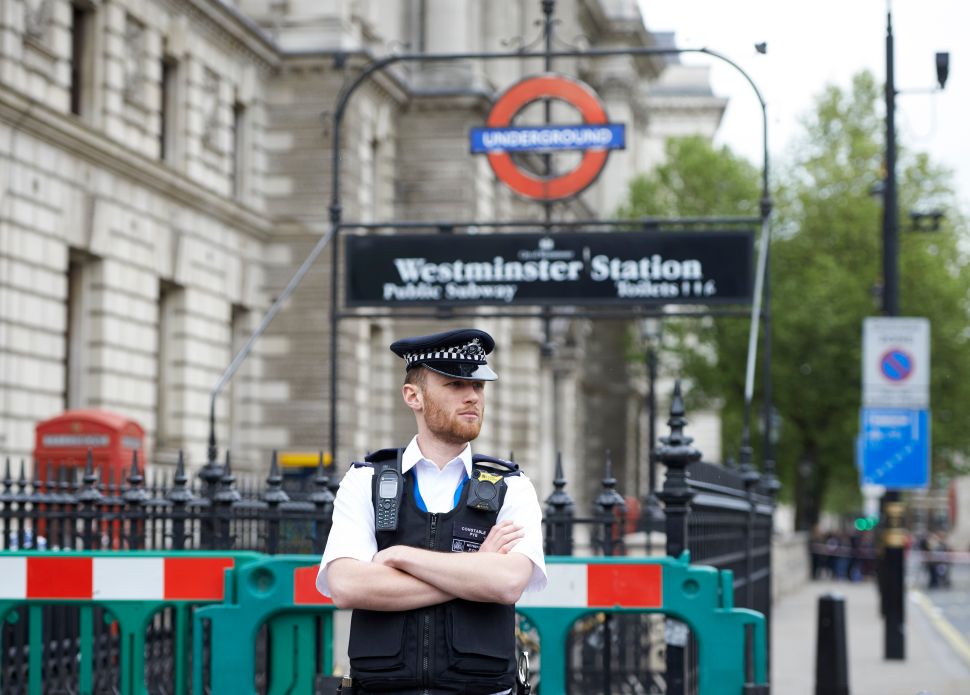