In the nearly two seasons since the “new” New York City Opera launched with a dismal exhumation of Puccini’s Tosca, the company has offered a couple of hits and more than a few misses. But a sparkling production of the obscure Respighi opera La Campana Sommersa is more than just excellent in all its parts: it places NYCO squarely back where it belongs, in the front rank of New York’s operatic establishment.

The excitement here does not derive directly from the work itself, a symbolist farrago whose libretto reads like someone put the collected works of Maurice Maeterlinck through the meat grinder, then added clam juice and peanut butter. Respighi’s music, glossily orchestrated, offers only occasional vocal opportunities for filigree or vehemence, depending on the twists of the incoherent story line.

It seems the supernatural denizens of an enchanted forest glade are up in arms about the clanging of a church bell about to be installed in a nearby village, so a faun and his sidekicks dump the offending noisemaker in the river. The bell maker catches the fancy of the fairy princess Rautendelein, who cures his blindness with magical soup and becomes his muse.

When the bell maker has a vision of his children bearing a chalice containing the tears of their dead mother, he flees back to the real world. Years later, the embittered craftsman seeks out Rautendelein once more, but, alas, she is now in a committed relationship with a lizard.

No, really. Stage director Pier Francesco Maestrini and a talented cast play this loopy stuff with sincerity and a kind of naïve honesty, without even a whiff of camp. It feels like a fairy tale half-remembered as you fell asleep, bizarre yet comforting.

In this staging co-produced with Teatro Lirico di Cagliari, the ravishing set design by Juan Guillermo Nova mysteriously conjures a shimmering and infinitely receding forest on the tiny stage of the Rose Theater, and Marco Nateri’s lavish costumes evoke a dreamy Pre-Raphaelite mood.

The most distinctive element of this opera, though, is the casting, following the NYCO tradition of seeking out the finest and most creative of American artists. The grueling lead role of the tormented bell maker Enrico fell to tenor Marc Heller, who jumped in on short notice when the scheduled singer, Fabio Armiliato, called in sick. He offered a big, muscular sound and unflagging vigor in this high-lying part, and he was particularly moving in the character’s surprisingly low-key death scene.

Soprano Brandie Sutton trilled and darted her way through Rautendelein’s iridescent melodies. But everyone really sat up and took notice each time Michael Chioldi sang a few measures as the lizard Ondino. His two solos expressing his longing for Rautendelein pealed out in a huge, rich baritone that made one long to hear him take on the greatest of Italian baritone roles, from Verdi’s Macbeth to Zandonai’s Gianciotto.

The orchestra, apparently a hybrid of New York and Cagliari forces, played this ornate score with easy virtuosity under the baton of conductor Ira Levin, even managing to create a warm, enveloping sound in the acoustically dry Rose Theater.

The best compliment that can be paid to this production is that it recalled the glory days of the 1970s and 1980s, when the company was ambitious, pioneering and always surprising. This Campana Sommersa may well point the way to a new golden age for NYCO. 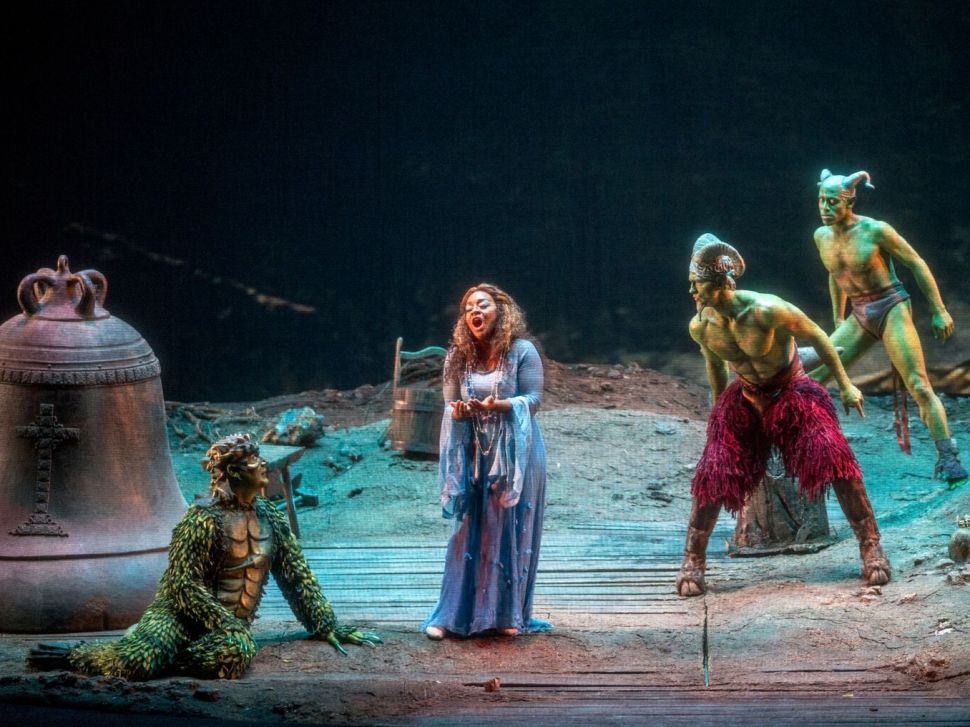