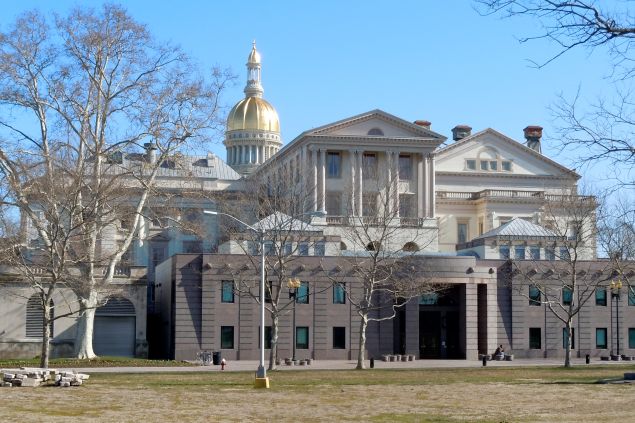 Gov. Chris Christie’s $300 million plan to renovate the state house cleared a hurdle Tuesday, ensuring the project will continue to live on as a potential issue in the upcoming gubernatorial race. Lt. Gov. Kim Guadagno has used her opposition to the plan to indicate she could distance herself from the highly unpopular sitting governor, her boss. But then Guadagno withdrew from a planned press conference to highlight her opposition just as the plan was coming up for consideration.

Quote of the Day: “She got cold feet because they wanted to rush this vote through on Tuesday and it would be a big embarrassment to the governor for her to have a press conference opposing the day before they were voting to approve it.” – Sen. Raymond Lesniak, on Guadagno’s decision to bow out of a press conference on her opposition to Christie’s $300 million statehouse rennovation plan.

Commission OK’s Christie’s $300M State House renovation
A bipartisan commission charged with maintaining the New Jersey State House has consented to a roughly $300 million plan to renovate the executive wing of the state capitol, a project that was first pitched by Gov. Chris Christie in November.
Nicholas Pugliese, The Record Read more

Guadagno backs out of anti-Statehouse renovation press conference
It would have been an interesting press conference, to say the least.
Lt. Gov. Kim Guadagno, the front-runner for the Republican gubernatorial nomination, had planned to hold a press conference on Monday with state Sen. Raymond Lesniak — a longshot candidate for the Democratic nomination — and the progressive group New Jersey Policy Perspective.
Matt Friedman, Politico Read more

Judge blocks Trump order on sanctuary city money
A federal judge on Tuesday blocked any attempt by the Trump administration to withhold funding from “sanctuary cities” that do not cooperate with U.S. immigration authorities, saying the president has no authority to attach new conditions to federal spending.
Associated Press Read more

100 Days of Christie Sniping at Trump’s Staff
Passed over for a top job in Trump’s administration, Christie has become an unusual sort of surrogate — quick to defend the president in one breath, sniping at Trump’s top aides and advisers in the next.
Salvador Rizzo, Observer Read more

Christie grades Trump’s first 100 days: ‘I’d give him a B’
Gov. Christie gave President Trump a ‘B’ grade 100 days into his term at the White House, declaring Trump’s staff needs to “get their act together” and “serve the president better.”
Andrew Seidman, Inquirer Read more

This N.J. lawmaker was Trump’s opening act
Maybe you can call Rep. Chris Smith the warmup act for Donald Trump .
Before the ambassadors of the members of the United Nations Security Council had lunch at the White House, they heard from Smith (R-4th Dist.) at the Blair House across Pennsylvania Avenue.
NJ.com Read more

Freehold: NJ shortchanges our schools, so we’re suing
Years of requests for more school money from the state have become a demand for millions of dollars after public school officials approved a resolution Monday to sue the Department of Education for the cash.
Steph Solis, Asbury Park Press Read more

Judge overturns school board referendum passed by 77 percent of voters
A Superior Court judge has ruled that a question posed to voters last November was poorly worded and voided the overwhelmingly approved change to the makeup of the school board.
Jessica Mazzola, NJ.com Read more

Ex-Christie aide joins Cuomo as chief of staff
Maria Comella confirmed to CNN in an exclusive interview that she will be officially named to the position Tuesday after spending the last few months advising the Democratic governor.
CNN Read more

Special meeting on new housing in Parsippany
The likelihood of new housing coming to Parsippany — including low-income housing, possibly at the direction of the New Jersey courts — is the topic of a public meeting hosted by Mayor James Barberio beginning 7 p.m. Thursday at Parsippany Hills High School.
William Westhoven, Daily Record Read more

Neptune cop quits, says she was harassed
Neptune Township Police Sergeant Elena Gonzalez tearfully took to the podium Monday night, in the township’s municipal headquarters. She asked for several of her fellow female officers to stand up in solidarity with her.
Austin Bogues, Asbury Park Press Read more

EDITORIAL: Keep fighting the PennEast fight
The PennEast pipeline has hit another snag — unless you trust what the PennEast folks tell us, that these little hiccups are just part of the normal process of approving such wonderful projects.
Asbury Park Press Read more