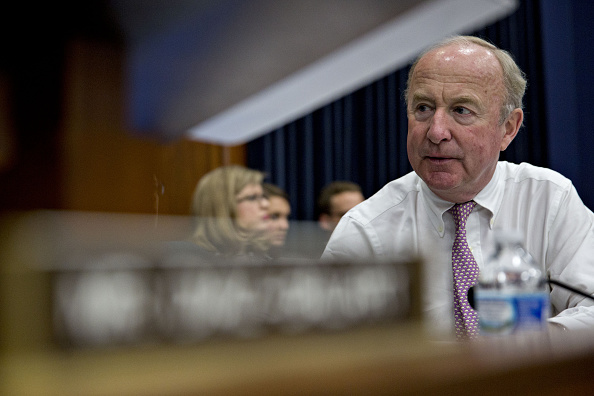 Rep. Rodney Frelinghuysen is the chair of the House Appropriations Committee. Andrew Harrer/Bloomberg via Getty Images

Rep. Rodney Frelinghuysen is under fire from the right and left these days – and when facing a fight a prudent politician builds up a big war chest. That’s what the 12-term incumbent is doing as progressives stage protests in front of his office and a conservative group runs ads targeting him for not supporting failed GOP healthcare efforts.

Gov. Chris Christie‘s efforts to shape the final months of his tenure and his career beyond Drumthwacket are the subject of insightful reports in the New York Times and Politico. NJ.com, meanwhile, has a roundup of what the people campaigning to replace Christie in the state’s top job plan to do about the issue of how much public employees should be able to collect at retirement for unused sick time.

Quote of the Day: “I was doing what I thought was best for the country. And for me,” – Gov. Chris Christie, on his endorsement of Donald Trump.

Now a target, Frelinghuysen sets mark for fundraising
Democrats have set their sights on ousting Republican Rep. Rodney Frelinghuysen next year, and a new fundraising report suggests that the 12-term incumbent from one of New Jersey’s oldest political families may be concerned.
Herb Jackson, The Record Read more

Conservatives attack Frelinghuysen in TV ads
Baseball fans in Morris County tuned to an exciting Yankee victory on ESPN on Sunday night may have been shocked to see a political ad running between innings attacking Rep. Rodney Frelinghuysen (District 11) for his part in the failure of his party’s attempt last month to repeal and replace the Affordable Care Act.
William Westhoven, Daily Record Read more

The Top 10 Public Contractors and their Political Contributions
For more than a decade, New Jersey’s pay-to-play laws have provided a check on businesses’ ability to contribute money to politicians in the hope of getting a government contract in return.
Colleen O’Dea, NJSpotlight Read more

Unused sick pay in N.J. is near $2 billion. Here’s what N.J. governor candidates would do about it.
It’s an issue that has been unresolved for years: New Jersey, the state with the nation’s highest property taxes, still allows government workers to collect large payouts for unused sick days.
NJ.com Read more

Hoboken concourse, platform to reopen following fatal crash
A concourse at Hoboken Train Station will reopen this summer after being boarded up since an NJ Transit train barreled over a bumper block and into the station, killing one women and injuring more than 100 people.
Paul Berger, The Record Read more

BYOB strip club says ban on advertising is hurting its business, lawsuit claims
An Atlantic City strip club has filed a lawsuit in federal court, claiming that a state law banning it from advertising about being a “BYOB” establishment is hurting business.
Caitlyn Stulpin, NJ.com Read more

Chris Christie Heads for the Door, Minus the Earlier Throngs
As the final months of his tenure in Trenton wind down, Gov. Chris Christie has kept himself conspicuously busy. He celebrated the opening of a new drug treatment facility. He delved into the intricacies of the Mets’ pitching rotation on a sports radio station. He dropped by the Prudential Center to warn children about the dangers of drug addiction.
New York Times Read more

Christie angling for a comeback
Chris Christie is feeling good again.
The New Jersey governor remains one of the country’s most unpopular executives, after a dismal year in which two allies were sentenced to prison, the state’s credit rating continued to drop, and his White House dreams were conspicuously dashed by Donald Trump.
Politico Read more

Lottery sales lagging once again
Lottery revenues are down and on track to make it the third year out of four that the private company running the games has missed its targets.
Dustin Racioppi, The Record Read more

Meet Your Next NJ Governor: 3 things to know about Jim Johnson
“Who is Jim Johnson?”
That’s the question the 55-year-old Montclair resident will have to answer over the next seven weeks as he seeks the Democratic nomination in the 2017 New Jersey gubernatorial election.Mike Davis, Asbury Park Press Read more

With Spectrum Auction A Wrap, How Should NJ Spend Proceeds?
A recently completed nationwide auction of broadcast spectrum led by the federal government will net New Jersey $332 million, putting before lawmakers the question of exactly how a state with serious fiscal challenges should use the auction proceeds.
John Reitmeyer, NJSpotlight Read more

In Atlantic City, no buyouts may mean layoffs
When state lawmakers finally agreed on a plan last spring to save the nearly broke city, officials touted early retirement buyouts as a way to cut costs without layoffs.
Christian Hetrick, Press of Atlantic City Read more

Paramus resident’s commuter proposal gets attention
The efforts of one concerned commuter saw the first signs of fruition this week.
Melanie Anzidei, The Record Read more

Camden residents worry about a drug clinic moving to their neighborhood. A Shore town did, too — until it actually happened
Pleasantville Mayor Jesse Tweedle fought hard to stop a drug-treatment clinic from coming to his city. He and his constituents feared that if the John Brooks Recovery Center moved from Atlantic City into the end of a strip mall off the Black Horse Pike, the methadone dispensary would attract loiterers and problems.
Allison Steele, Inquirer Read more