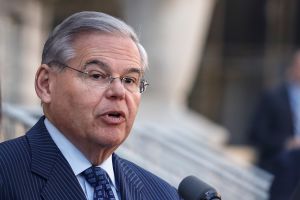 Democratic powerbroker George Norcross will be hosting a high-dollar fundraiser for U.S. Sen. Bob Menendez next month, according to an invitation obtained by Observer NJ.

An influential insurance executive from South Jersey with a deep political network, Norcross is throwing his support behind Menendez at a critical time, as the senator faces the prospect of a federal trial on corruption charges later this year.

Menendez had $1.6 million stored up in his campaign account at the end of 2016, according to Federal Election Commission records. The second-term senator is up for re-election in November 2018. A robust campaign account will be key for Menendez in defending his seat from Democrats and Republicans who see an opening due to the corruption charges.

Sharing hosting duties with George Norcross will be his brother Phil Norcross of the law firm Parker McCay, and Kris Singh, owner of Holtec International.

The lunch with Menendez at a trendy Italian eatery in Cherry Hill is scheduled for May 15. The suggested contribution for a co-host is $5,400 and for a guest $2,700, according to the invitation.

Federal prosecutors charge that Menendez inappropriately advocated for his friend and top donor, Florida eye doctor Salomon Melgen, in meetings with federal health officials, among other allegations. Menendez has maintained that his actions were legal.