Syrian dictator Bashar al-Assad swears the April 4 chemical weapons attack on the village of Khan Sheikhun didn’t occur—or if it did occur his forces didn’t use chemical weapons.

“Definitely, 100 percent for us, it’s fabrication,” Assad told Agence France Press in what AFP touts as the Syrian genocidaire’s first interview since the attack and the Trump Administration’s retaliatory cruise missile strike.

Assad followed his allegation with more propaganda poison: “Our impression is that the West, mainly the United States, is hand-in-glove with the terrorists. They fabricated the whole story in order to have a pretext for the attack.”

Alleging the U.S. conspires with terrorists echoes other boggling “Blame America” lies that have unfortunate and damaging traction in many Muslim countries. Two of the worst—(1) that America planned 9-11 and (2) the U.S. created Al Qaeda and the Islamic State in order to wage global war against Muslims—hinder efforts to combat militant Islamist terrorists.

Arab Middle Eastern conspiracy theorists, encouraged by the usual anti-American suspects, have persistently blamed the U.S. for numerous ills and calamities. In 2013 the U.S. was simultaneously accused of supporting Assad and trying to topple him.

On December 1, 2003, in an interview with NPR’s hard-left gossip, Diane Rehm, Howard Dean—at the time a candidate for the Democratic Party’s presidential nomination—explored the domestic political potential of the “America planned 9-11” lie.

“The most interesting theory that I’ve heard so far, which is nothing more than a theory … it can’t be proved, is that [Bush] was warned ahead of time by the Saudis,” Dean said in the (NPR) interview.

Dean also suggested Bush was suppressing information about the 9-11 massacre.

Dean wrapped his despicable insinuation Bush had advance knowledge of the 9-11 in the slimy tissue of “theory,” a rhetorical dodge allowing Dean and his media pals to claim his questions reflected a righteous quest for truth.

Except they didn’t. In a bid to advance his own presidential candidacy on a radio program beloved by hard left Democratic primary voters, Dean launched a noxious ad hominem attack on the President of the United States and appealed to fear.

But Howard Dean did something different. In the midst of a very difficult war Dean rhetorically energized and exploited a corrosive lie that provided propaganda cover for America’s mass murderering enemies. That lie would eventually metastasize into a propaganda ditty yoking 9-11 conspiracy theories with the failure to find weapons of mass destruction (WMD) in Iraq. Everyone’s heard the brutal bumper sticker jingle that undermined the American war effort: “Bush Lied, People Died.”

Confident propagandists love to play “Nothing to see here, move along” and its variants that slickly ignore essential context or suppress key facts.

Why might Turkey retaliate? Syrian jet-fighters loyal to Assad launched a chemical weapons attack within 100 kilometers of the Turkey-Syria border, a fact-on-the-ground most mainstream media have missed or ignored.

Turkey didn’t retaliate, the U.S. did. But the Turks were furious. Turkish investigators quickly autopsied three victims of the attack.

Their blood and urine samples confirmed exposure to nerve agent Sarin (GB in military jargon). Sarin is definitely a WMD. Note that “officials from the World Health Organization and the Organization for the Prohibition of Chemical Weapons participated in the autopsies.”

Physical evidence obtained and analyzed by responsible, credible organizations confirmed the use of a banned and deadly WMD. Other nations reached the same conclusion, including the U.S.

However, Assad’s AFP interview reprised the “nothing to see here” trope: “You have a lot of fake videos now,” (Assad) said. “We don’t know whether those dead children were killed in Khan Sheikhun. Were they dead at all?”

“Were they dead at all?” implies the improbable is probable, that the incident was faked and Assad and his regime are victims of a vast smear.

But Assad was just asking a question, right? Like Howard Dean? How do you know with absolute certainty?

Well, the images are sickening and hideous.

Asked if the attack crossed a red line, echoing Barack Obama’s unenforced threat, Trump said: “It crossed a lot of lines for me. When you kill innocent children, innocent babies, little babies, with a chemical gas that is so lethal, people were shocked to hear what gas it was, that crosses many, many lines, beyond a red line, many, many lines.”

In August 2012 President Barack Obama warned Assad that the U.S. would not allow his regime to use chemical weapons. Despite Obama’s subsequent claims, there is no question he delivered a threat:

CNN and other pro-Obama media immediately announced that Obama was threatening a “U.S. military response.”

The Washington Post reported the Obama Administration thought the red line would have “a deterrent effect.”

Respect for all elements of American power—military, diplomatic, economic and cultural—backed Obama’s threat. As president Obama bet international respect for American soft and hard power would deter the use of chemical weapons of mass destruction by Assad, and military power was part of the package.

Despite the warning from the leader of the world’s most powerful state, on August 21, 2013, Assad’s forces bombarded the Damascus suburb of Eastern Goutha with Sarin-laden rockets.

Several medical aid groups, including Doctors Without Borders, initially reported at least 300 died from exposure to a chemical agent and symptoms indicated the killer was a nerve agent. Over the next week the Goutha death toll climbed to 1,200. In 2017 credible sources insist 1,400 to 1,500 died in the chemical attack. It is reasonable to assume some of the dead were anti-Assad rebels. Given the body count, it is also reasonable to assume many of the victims were simply trapped civilians gassed by Assad.

Obama decided the red line really wasn’t a line. Forget the punitive military strike. Instead, Obama embraced Vladimir Putin. Russia would take control of Syrian chemical weapons then move the weapons out of Syria and destroy them. This arrangement, however, didn’t alter his failed red line’s bottom line: the Assad regime had committed a war crime forbidden by America’s president, and committed it with impunity.

Assad called Obama’s WMD bluff and got away with it.

Assad’s WMD attack on Khan Sheikhun killed over 80 people—and it definitely crossed the Trump Line. Over the night of April 5-6, 59 U.S. Navy Tomahawk land attack cruise missiles hit the regime-controlled airfield where the jets that dropped the Sarin bombs were based.

Obama’s apologists contend that he decided attacking the Assad regime “could lead to the rise of an even more radical group,”  an outcome he wanted to avoid. So—nix an attack. Trust Putin.

The apologists ignore the fact Obama had wagered respect for American power. They also forget that the military intervention options briefed in July 2013 by Chairman of the Joint Chiefs General Martin Dempsey included one option that involved what amounted to sustained punitive strikes. “Intervention” and “sustained” are important qualifiers, for GEN Dempsey was exploring options for “degrading” and toppling Assad, making “war at a tempo of our choosing,” not merely punishing Assad and his regime.

“Conduct Limited Standoff Strikes—entails attacking “high value” regime targets with bombs, missiles and possibly artillery munitions. It requires several hundred aircraft and employs missile-firing naval vessels. This is war, of course. ‘Depending on duration,’ Dempsey writes, costs run ‘in the billions.’ Given time, he thinks this option will physically weaken the regime by destroying its military and morally sap it by increasing ‘regime desertions.’ U.S. forces could face retaliatory attacks, and our attacks could kill civilians.”

The pertinent 2017 takeaway is this: In 2013 Obama knew limited standoff strikes with missile-firing naval vessels were an option.

The April 4 chemical attack revealed Obama’s reliance on the Kremlin to control and remove chemical weapons was a delusion if not an intentional masquerade.

Obama’s embrace of Putin, initially touted as an example of “soft power” finesse, gave the Kremlin a major role in U.S. Syrian policy vis a vis the use of chemical weapons.

The April 4 attack exposed that error, with mass casualty consequences. Russia helped facilitate a major war crime by its Syrian client. In so doing it exposed deep and perhaps unbridgeable differences in American and Russian Syrian policy, differences that Obama’s treacly Fall 2013 rhetoric tried to obscure.

Bush lied. People died. In 2008 The Daily Kos and other adolescent suspects ran wild with the ditty. Oh, maybe Bush didn’t really lie, but we didn’t find any WMDs in Iraq so let’s shout stamp scream that he did for our political gain.

Nancy Pelosi (Democrat, CA), 1998: “Saddam Hussein has been engaged in the development of weapons of mass destruction technology which is a threat to countries in the region and he has made a mockery of the weapons inspection process.”

Teddy Kennedy (Democrat, MA), 2002: “We have known for many years that Saddam Hussein is seeking and developing weapons of mass destruction.”

“The tide of war is receding. The drawdown in Iraq allowed us to refocus our fight against al Qaeda and achieve major victories against its leadership—including Osama bin Laden. Now, even as we remove our last troops from Iraq, we’re beginning to bring our troops home from Afghanistan, where we’ve begun a transition to Afghan security and leadership.”

In 2012, “receding war” would become an Obama re-election campaign theme. He frequently touted the U.S. withdrawal from Iraq as an accomplishment—insinuating he had corrected Bush’s lie.

His second inaugural, delivered in January 2013, echoed the claim of diminishing warfare: “A decade of war is now ending.”

Say it again. Obama lied. People died. Include murders committed by the Islamic State in Iraq among Obama’s dead. Obama left a power vacuum in Iraq. Yazidi women were raped. No, it doesn’t rhyme, but it’s more accurate than Bush lied.

Say it again. Obama lied. The battle for Mosul continues so people continue to die.

As for eiminating Syrian WMD, Obama lied and Syrians definitely continue to die.

Congress must investigate the spurious deal Obama made with Putin. We need to know if Obama lied or he made a tragic mistake. Former Obama Administration officials and former President Obama himself may argue they didn’t lie, they merely made very serious errors in judgment. If they take this route, Congressional investigators should demand they repudiate the “Bush lied” for the hideous falsehood it is.

The “Bush lied. People died” ditty established a corrosive domestic political precedent that has made waging the complex Global War on Terror more difficult. This war will last for decades. Winning it requires unity of effort.

As for Assad and Obama’s red line, President Trump showed Assad that using banned chemical weapons does have consequences. On April 13, he followed up the military strike with coercive diplomacy. That is truly smart diplomacy. 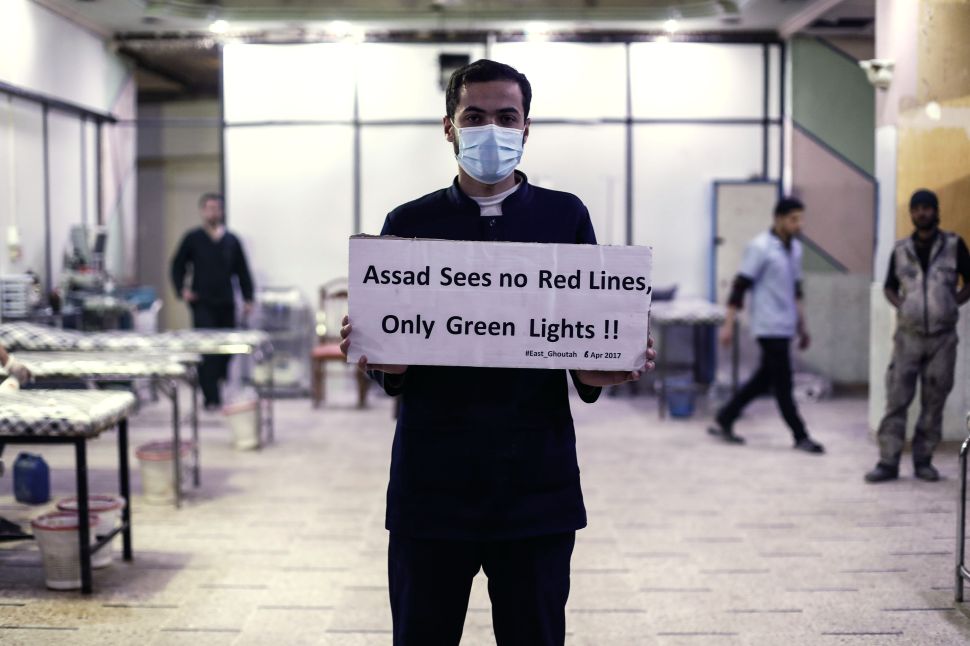