There are approximately 150 meal kit companies in the United States. What’s the environmental impact of getting food from farm to meal kit customer? And will knowledge of that impact ultimately sink these services—or give them a competitive edge if they can convince consumers that prepackaged meals generate less overall waste than DIY meal prep?

For example: The eight million monthly meals Blue Apron produces flow through three regional distribution centers—Richmond, Calif.; Arlington, Texas; and Jersey City, N.J. The company says it tries to source all produce within 200 miles of the distribution centers, but its menus aren’t exactly local. If radishes are on the menu for the week and there aren’t any in New Jersey, they are shipped from somewhere. Fast Company reports, “Since the vast majority of meal-kit companies are not local, they face the complex supply chain logistics of transporting food from farms and manufacturing plants to locations across the country, while keeping everything at the right temperature. This is a hugely energy intensive process. Meal kits use large quantities of packaging to contain small amounts of spices or cheese or balsamic vinegar.”

Because that food has to stay reasonably fresh—and because grouping the ingredients is part of the service’s appeal—there are a lot of packaging issues—styrofoam coolers are not out of the norm for storage, and neither are plastic bags, sealed plastic “ice packs” (usually a chemical gel) and other packaging that can be challenging to break down and recycle.

While meal kit makers often acknowledge that packaging is a problem, their solutions vary. Some companies say their sourcing practices—requiring suppliers to farm sustainably, for example—offset the environmental damage done by other parts of their supply chain. Other companies are making biodegradable packaging part of their marketing pitch to consumers.

Americans have become increasingly sophisticated food customers, expecting to know where their food was grown and whether it was in season. Calculating the waste footprint of their meals may be a logical next step.

So what? Boxed meal businesses thrive because they make consumers’ lives simpler. A meal subscription streamlines dinnertime labor: They tell you what you’re eating for dinner, they’ve portioned the ingredients so there’s no leftovers, and they’ve dropped it at your door. If you’re one of the adults in a family of four, the $140 per week you’d spend on a four-meal Blue Apron service—$8.74 per meal per person—is roughly what you’d spend for a McDonald’s value meal, but with a significantly different nutritional profile and no need to drive anywhere to get it.

Meal kits also tackle the embarrassing leftovers in your fridge—the liquifying parsnips you have left after trying some in a recipe and discovering you didn’t really like them, the bottle of fish sauce you bought because a recipe you were trying required a teaspoon of the stuff. The lack of food waste and the lack of extraneous ingredients cluttering up one’s cabinets is tremendously appealing.

The boxed meal service industry may become a $5 billion industry in the next 10 years if it can keep up the value proposition: more convenience, less hassle, better dinners for busy people. As the industry scales up, it will have to revisit its sourcing, distribution and packaging models. And the industry will scale up: Jeff Bezos teamed up with Tyson foods to begin offering meal kits via Amazon Fresh. Campbell Soup and Hershey are also looking at the business. And when these big companies barge into the space, everyone will have to adjust.

Who cares? People who care about food waste are watching the packaged-food industry, because one of the claims from a company like Blue Apron goes like this: The prepackaging of food helps eliminate food waste. As of right now, a staggering 21 percent of food waste in this country is the fault of consumers who don’t use up everything they buy. Precisely packaged quantities of ingredients eliminate that hazard. And if food waste becomes a trendy issue in food culture—the way slow food did in the eighties, for example—then meal delivery boxes can capitalize on that trait.

Farmers are also seeing where this market goes. Last year, Blue Apron sourced 75 crops from independent farms at prices that are higher than typical wholesaler rates (yet lower than typical CSA rates). Their operational model has their recipe developers working with specific farms months in advance, timing recipes to coincide with the farms’ optimal harvest periods. For American farmers, there’s hefty incentive to partner with a meal delivery business, because the sheer volume of produce required—plus those above-wholesale rates—can really tilt a balance sheet.

Your old-school environmentalists are watching, too. Those gains in eliminating food waste may come at the expense of a lot of plastic packaging and a lot fuel burned in getting food to distribution centers, packaging it, then delivering it to millions of households. The question facing those critics: Do they have enough of a case about the negative aspects of meal kits to offset the presumed positives like lower food waste and more business for local farmers?

There is no way to eat where you’re actually conserving energy and resources. But just as slow-food proponents encouraged people to take a look at the benefits of eating seasonally and shopping locally—and look how that’s diffused to chain restaurants and supermarkets in a decade—expect low-waste proponents to start asking boxed-meal subscribers to think about the rubbish that goes with every meal. 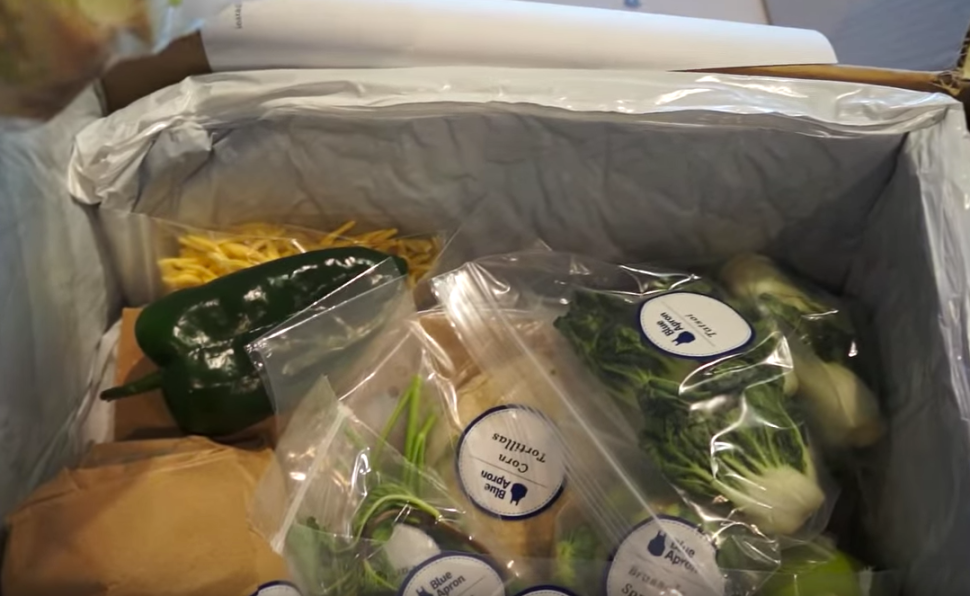