This is People Who Podcast, where we talk to the people behind some of the most fun and interesting podcasts available today. Why do they make their shows? What do they love about them? And is podcasting actually a viable career option to today’s recent batch of graduates?

I realized the other day why I’m not crazy about Alec Baldwin’s Trump impression. It’s that it seems like Baldwin asked to do the impression and just keeps coming back because he can– he’s a guy who gets whatever he asks for and is celebrated for being mediocre at it. The story of his impression and Trump’s presidency are too alike for the joke to work: aside from a few fanatics, everyone is just humoring both of them.

Comedians Desus Nice and The Kid Mero often open their podcast, Bodega Boys, with a Trump sketch. Their Trump uses slang expressions the real Trump has never heard: we out here, it’s lit. The comedians, who are Jamaican and Dominican, respectively, wear Trump’s adenoidal whine, long consonants and exclamations of “Sad!” like an ill-fitting suit, which makes the impressions all the more satisfyingly disrespectful.

Politics, as in current events and policy, makes up just a fraction of what Bodega Boys is about. The show has no real elevator pitch, and to say that it’s a recording of two guys just talking in an unfiltered way about the news and pop culture is to lump it in with a million other podcasts. What sets it apart is the comedic genius of its hosts, which I believe is the kind that comes around once in a generation.

Desus and Mero met when they were kids, but connected online much later, when they were both taking advantage of what Twitter had to offer back when Twitter had more to do with joke-writing and less to do with quippy Nazis and Russian conspiracy theories. To hear two people sound so excited to talk to each other week after week (and really, every day, if you also watch their Viceland show Desus and Mero) is in itself exhilarating. The fact that it’s two adult platonic male friends makes it even purer– they are unabashed in their enthusiasm for the interactions they have with each other, in a way that you rarely hear from two humans.

Each episode of Bodega Boys begins and ends with a nearly endless string of honorifics and self-descriptions from each host: Desus Nice a.k.a. Desus Vice a.k.a. Young Chipotle… a.k.a. Don’t talk to me in the Uber Pool, I don’t know you!… My plus one got a plus one so don’t make a fuss, son… your problematic bae… The Human Dr. Bronner’s Label, dilute, dilute, dilute! Then Mero: The Human Durag Flap… Dr. Ben Barson, my hands are gifted… Curve Gotti… Skrrrt Loder… Feel Da-Ass Tyson… Barmelo Xanthony… The Plantain Supernova in the sky-y… If you see me at Target, respect my agency and approach me like an ursine mammal…

After the initial sketch and ironically lofty introduction, the two men continue talking to each other at virtually the same pace for another hour and a half, with only the occasional lull to laugh or catch their breaths.

They tell stories about growing up in the Bronx. Some of their best riffs involve extremely specific references to life in the big city– old ladies taking too long at the subway turnstile, people calling the bodega guy “Papi.” Other topics they’ve covered, such as keeping porn on an external hard drive, are less geographically particular but similarly esoteric. They small-dice and roast politicians and pundits– Trump, Sean Spicer, Kellyanne Conway and Tomi Lahren prove to be especially rich sources. They predict the future a lot: in these scenarios, the pair of co-hosts has usually gone on to much greater fame and fortune.

One bit foresaw Jordan Peele, director of Get Out, sitting in an awards show audience, having become a sort of Alfred Hitchcock-like figure. It was a small detail in a larger joke they were constructing, but it made me realize two things: one, that, oh yeah, Peele probably will one day have a large body of revered psychological thrillers, and two, so much of Desus and Mero’s humor comes from contrasting the bleakness and idiocy of the present with a future they seem to truly look forward to.

In a recent article for the New York Times, the scholar Ibram X. Kendi posited that, in American history, “there have been two historical forces at work: a dual and dueling history of racial progress and the simultaneous progression of racism.” This gulf is the same, or at least similar to, the one Desus and Mero mine for comedy. Liberals love to speculate that the Trump era will inspire great art, and I tend to disagree: great art about dark times often tends to come twenty years later. The Bodega Boys might prove me wrong, though: the past, present and future come together in this podcast in a way that is at once scathing and hopeful. 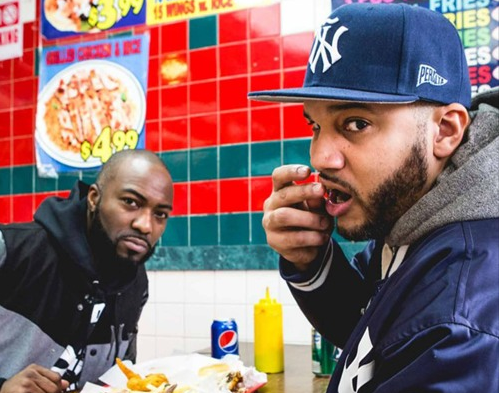