Phil Jackson fancies himself a flower child of the 60s. The nickname (The Zen Master), the meditation retreats, the house in Woodstock, and the history of LSD use all help craft the impression that Phil is about peace, love, evolution and understanding. And when you’re winning title after title, people are willing to accept whatever self-image you want to project. But when you look at Jackson’s tenure as President of the New York Knicks, he looks less like Allen Ginsberg and more like Donald J. Trump. Case in point:

Trump: This applies to basically Trump’s entire vision—manufacturing, trade, immigration, criminal justice—but let’s go with coal as our example here. Despite Trump’s steps to dismantle Obama’s climate change efforts and lift coal production restrictions, the mining and transportation jobs he envisions bringing back are long gone. They’re performed by robots. You can offer incentives, weaker regulations and tax credits to companies who flourished 50 years ago—but you can’t put the genie back in the bottle or re-create their workforce.

Phil: The triangle offense is Phil’s albatross. There’s a reason Steve Kerr chose to coach the Warriors instead of the Knicks. Phil’s system was great in its time—which has long since passed. The game has changed inexorably, yet Phil clings desperately to a relic of the past. The team suffers as a direct result.

(2).      Throwing people under the bus and avoiding personal responsibility

Trump: Trump’s campaign team turned over multiple times because the minute someone faltered (or the media revealed unpleasant facts about their past that Trump’s vetting failed to catch), he disposed of them. And even though his White House is only 12 weeks old, it’s already consumed by rumors of potential firings. From failed health care legislation to multiple courts overturning his immigration executive orders and everything in-between, Trump has never personally accepted responsibility for any failures. Like Phil, he just blames others.

Phil: In his now famous press conference from last week, Phil’s comments about Carmelo Anthony were so out of line, it prompted a public rebuke from the NBA Players Association. This is typical of how Phil governs: by leaks, rumors, innuendos, hints and, when that all fails, overt public criticism. The Knicks are 76-157 under his leadership and yet, somehow, it’s never his fault.

Trump: The Trump administration faces a historic number of vacancies (according to Politico, of the 553 key posts that require Senate confirmation, only 24 people have been nominated), in part because he’s new to government, and in part because of mismanagement—but mainly because so many truly talented people simply don’t want to work for him. So the process takes longer and the likely outcomes only grow worse.

Phil: Why did Phil sign a washed-up Joakim Noah to a four-year contract? Because no one decent wanted to play for a team under Phil’s vision and direction. Sure, the Knicks will have a lot of cap space if they trade Melo, but what truly talented free agent would willingly enter this fiasco? Phil’s mindset, culture and approach means he can’t bring the ingredients integral to success—which means the team can’t win.

Trump: From his inaugural address, to his convention speech focusing on crime and the inner cities, to every rally and his immigration executive orders, Trump’s rhetoric and actions are the real world actualization of the kinds of views Phil has expressed (see below).

Phil: When the State of Arizona took up legislation in 2010 to require local police to determine people’s immigration status, the entire Phoenix Suns organization protested, wearing “Los Suns” jerseys to express their views. Phil went the other way, publicly defending the legislation in an interview with ESPN and then criticizing the Suns for getting involved in politics. His comments last year calling LeBron’s business partners his “posse” were seen as racially insensitive at best, and his comments from 2005 welcoming the NBA dress code because “the players have been dressing in prison garb the last five or six years” was more of the same. Is Phil actually racist and anti-immigrant? I doubt it. But the world has changed definitively and Phil didn’t get the memo.

Are Trump and Phil mirror images of each other? Of course not. Phil has only further destroyed an already long-suffering basketball team. The politics of sports may be vicious, but the stakes are low.

But Phil and Trump are a lot more alike than either would want to admit.  So does that mean, as go the Knicks so goes the country? I hope not. 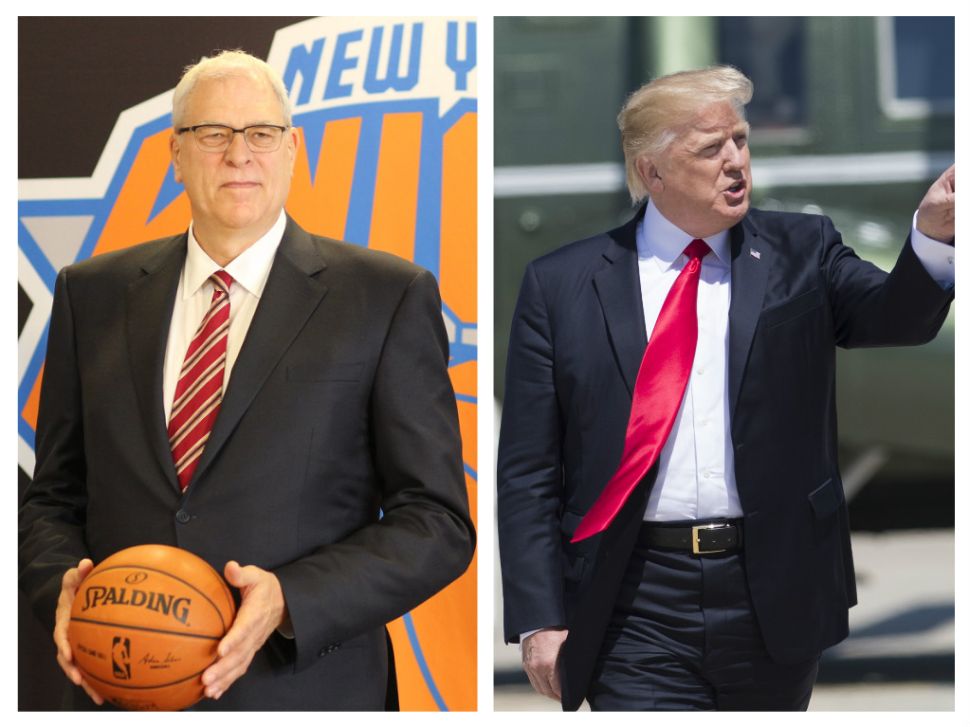