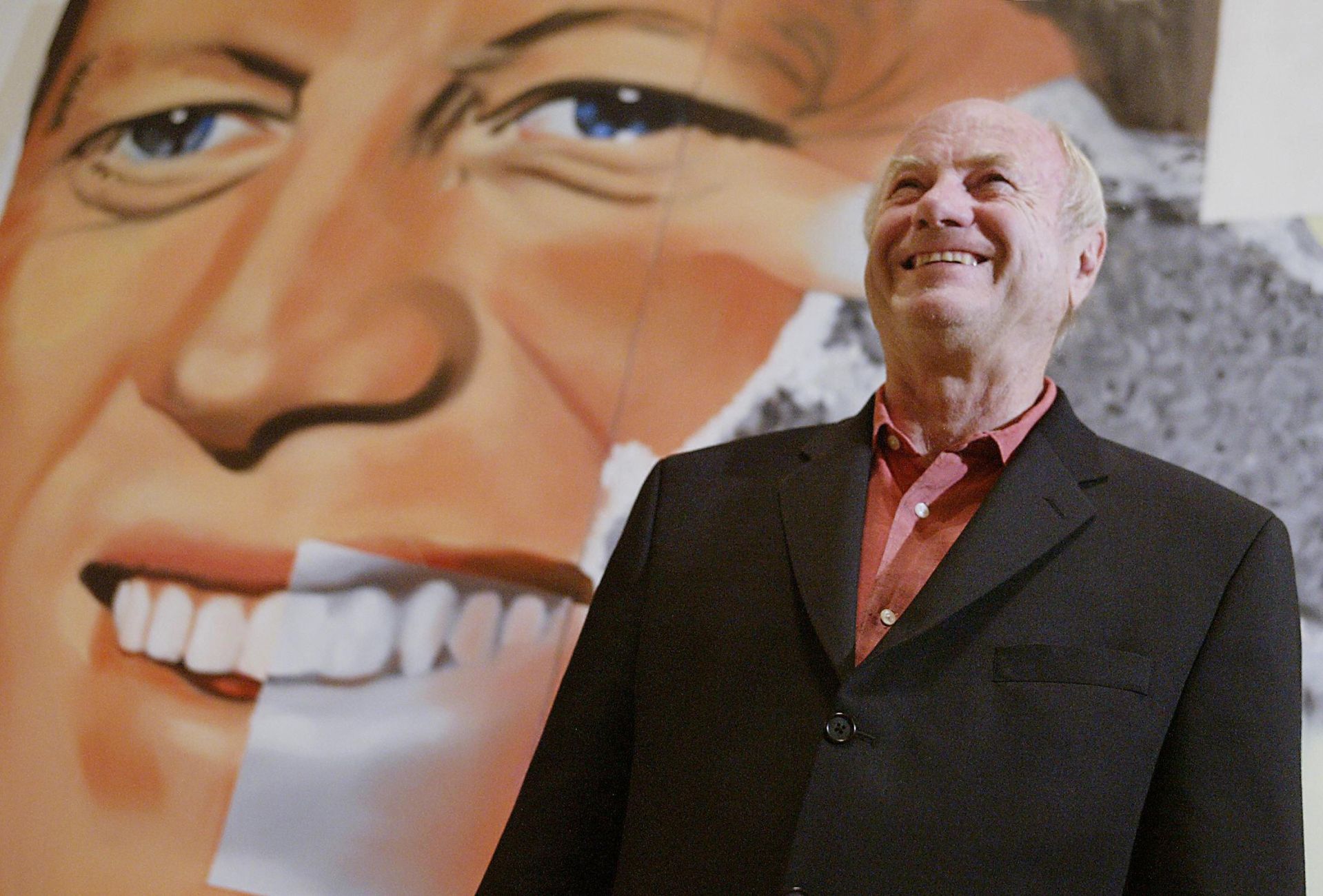 James Rosenquist poses on May 12, 2004 in front of his painting 'Elect President'.
Rafa Rivas/AFP/Getty Images 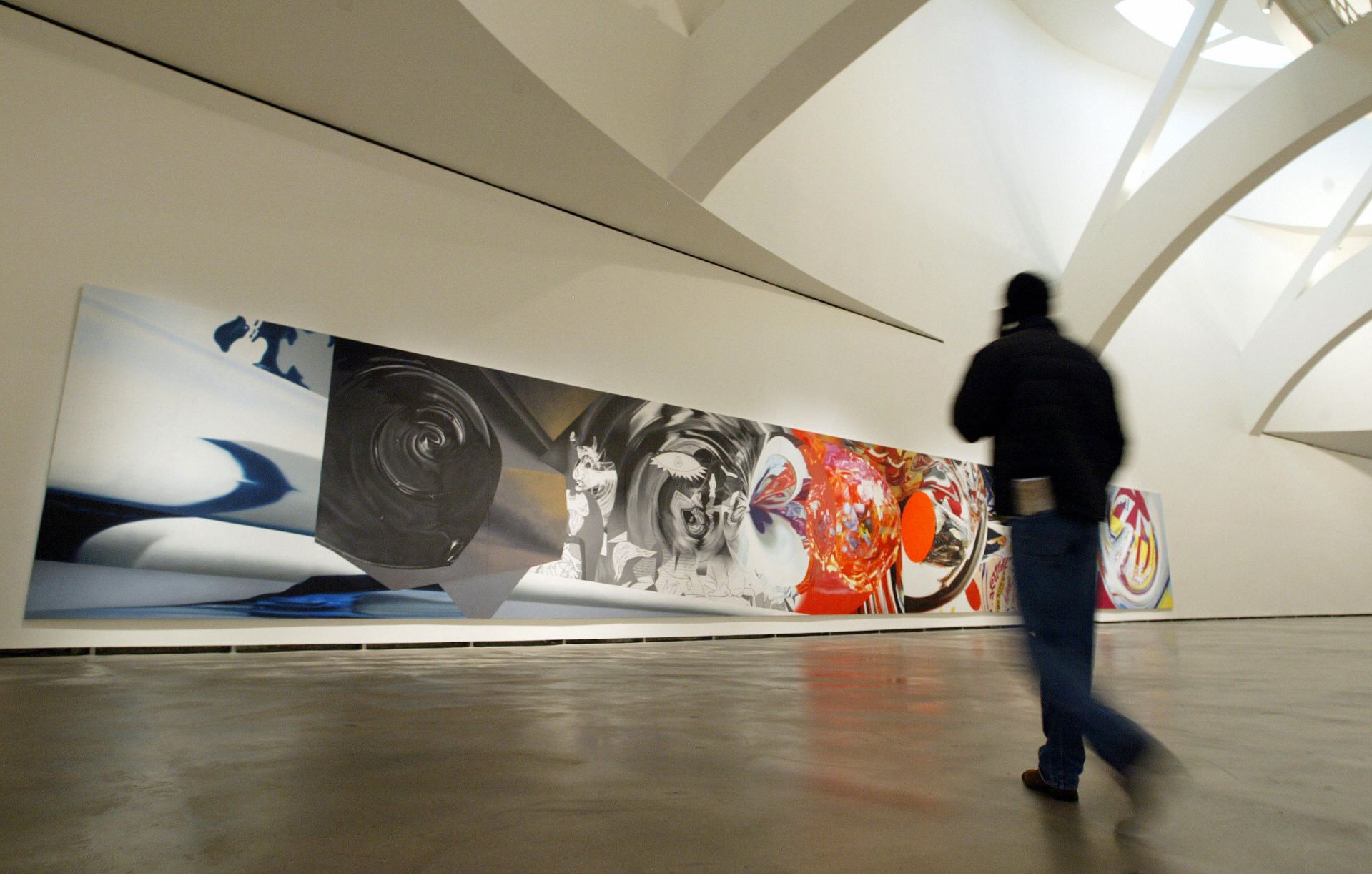 Rosenquist's 'The Swimmer in the Econo-mist (painting 1)', on view in the artists's 2004 retrospective at the Guggenheim Bilbao Museum.
Rafa Rivas/AFP/Getty Images 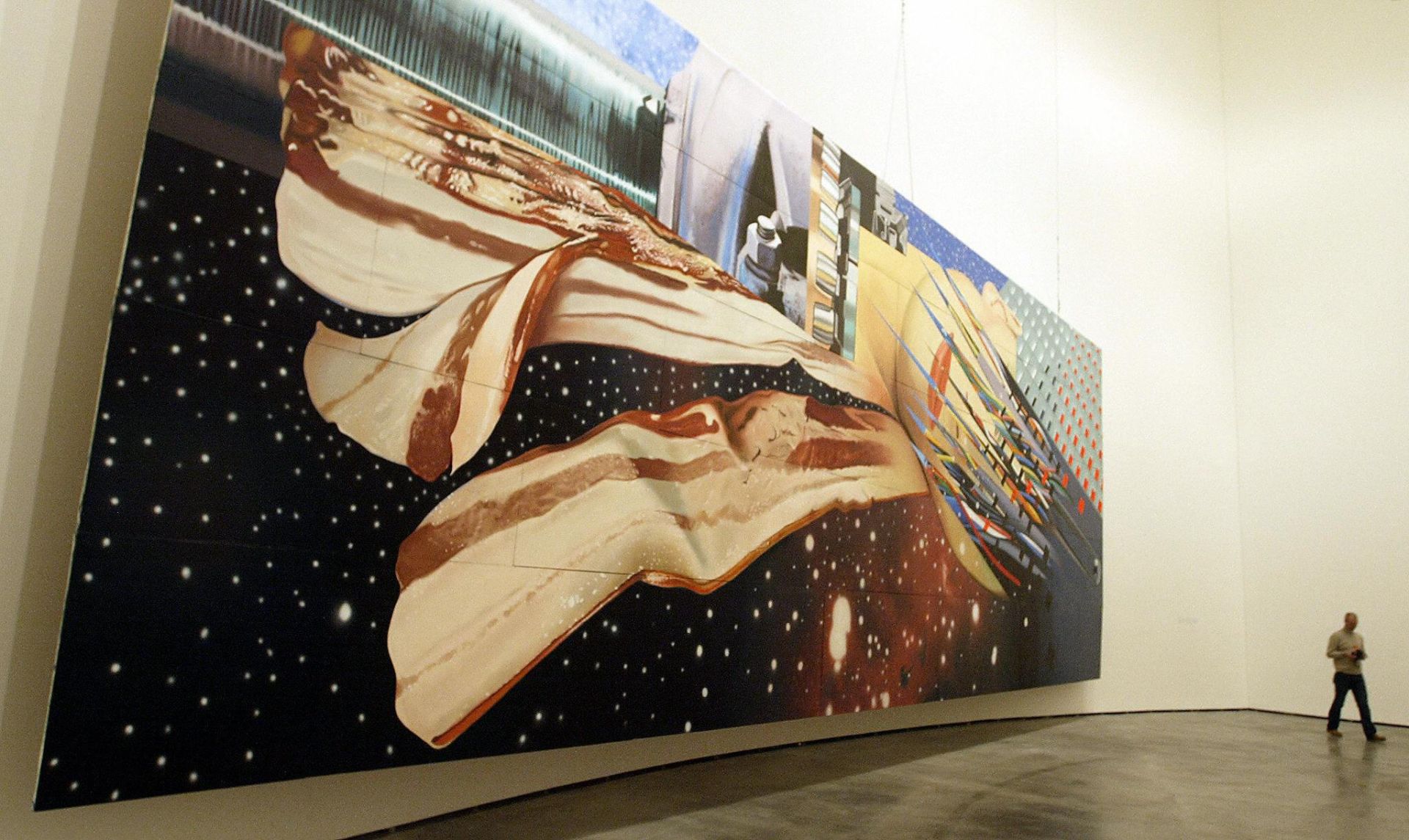 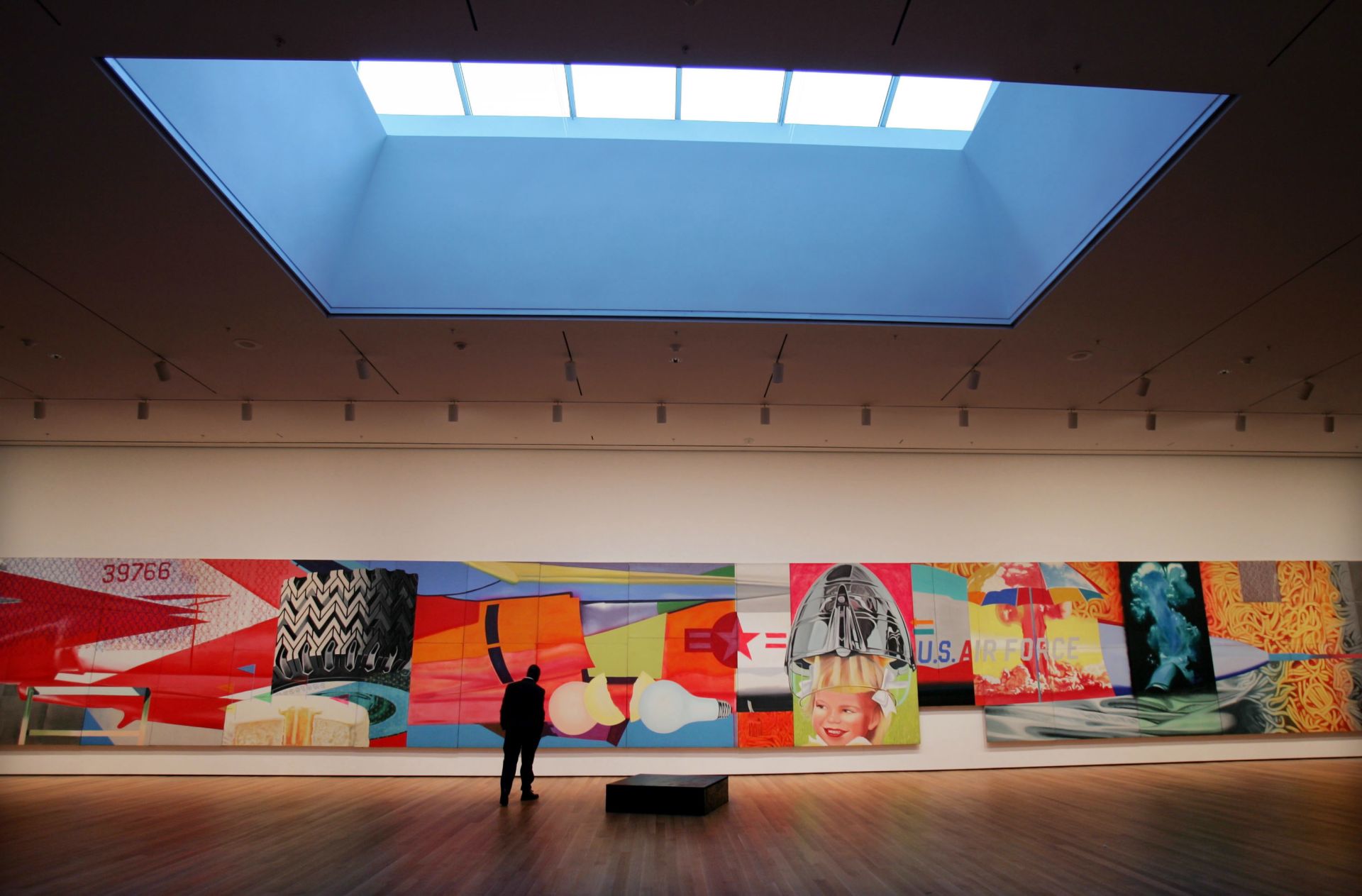 Perhaps Rosenquist's most famous work, 'F-111' on view at the Museum of Modern Art in 2004.
Mario Tama/Getty Images
Advertisement 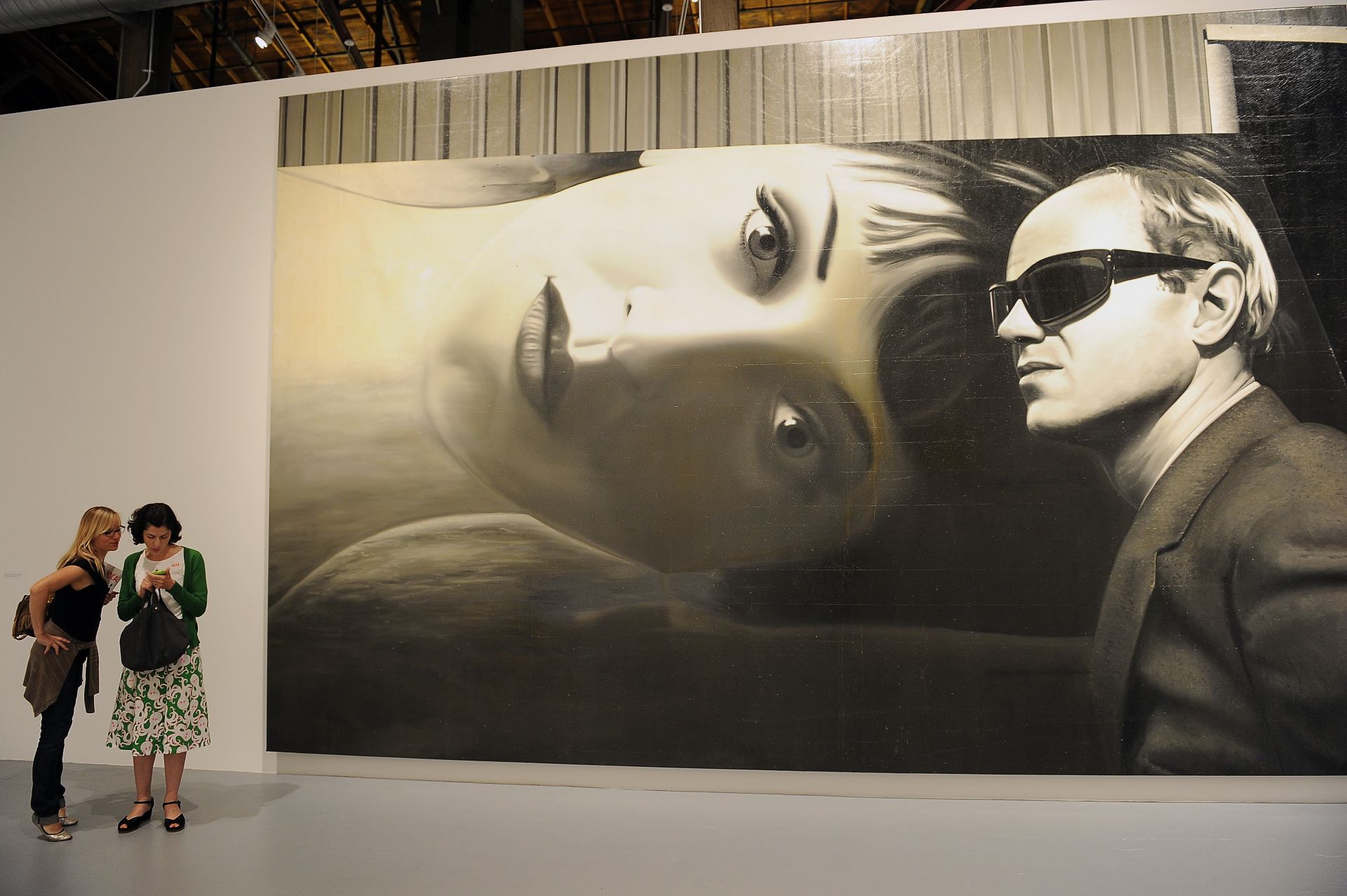 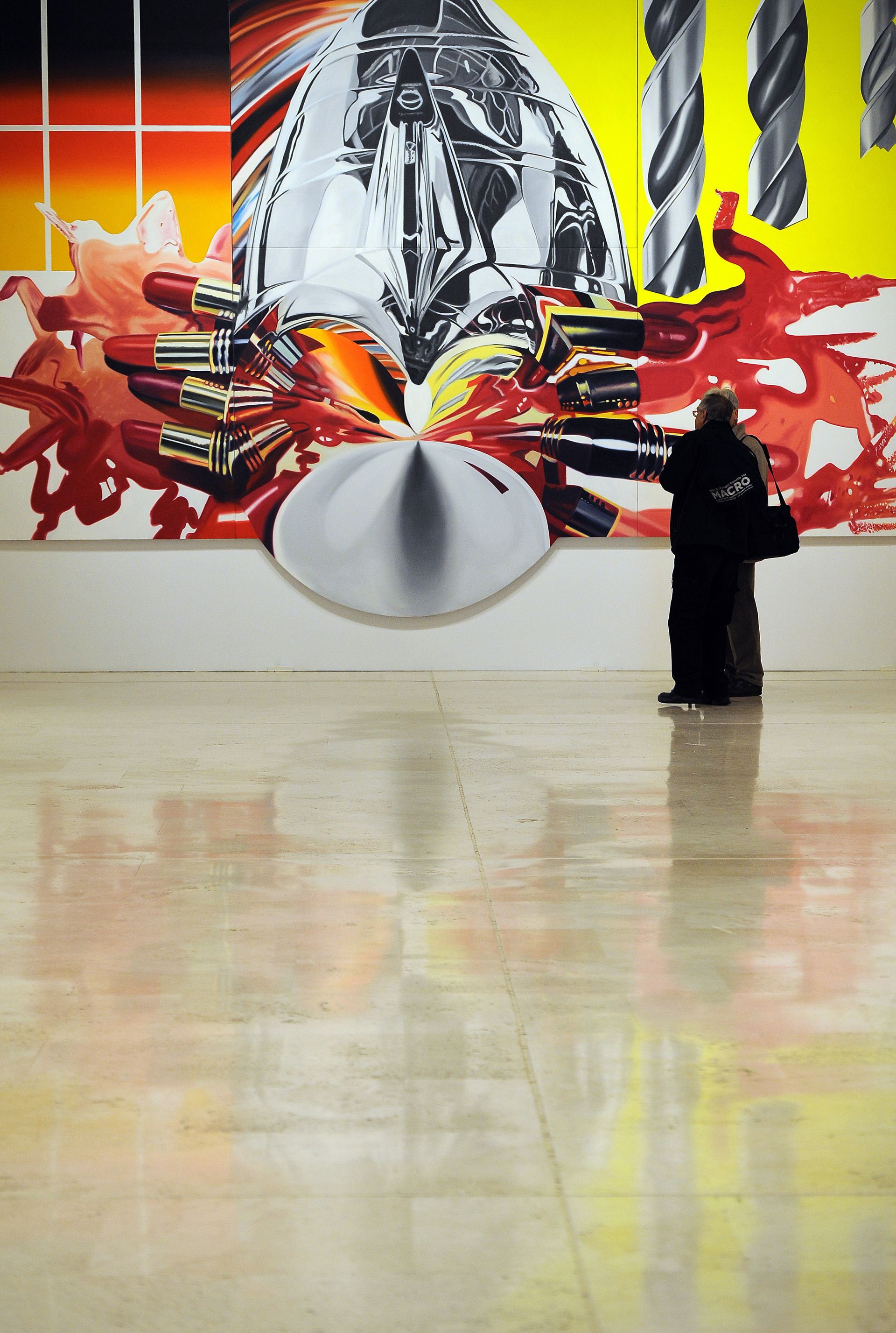 Another view of 'The swimmer in the Econo-mist'.
Gabriel Bouys/AFP/Getty Images 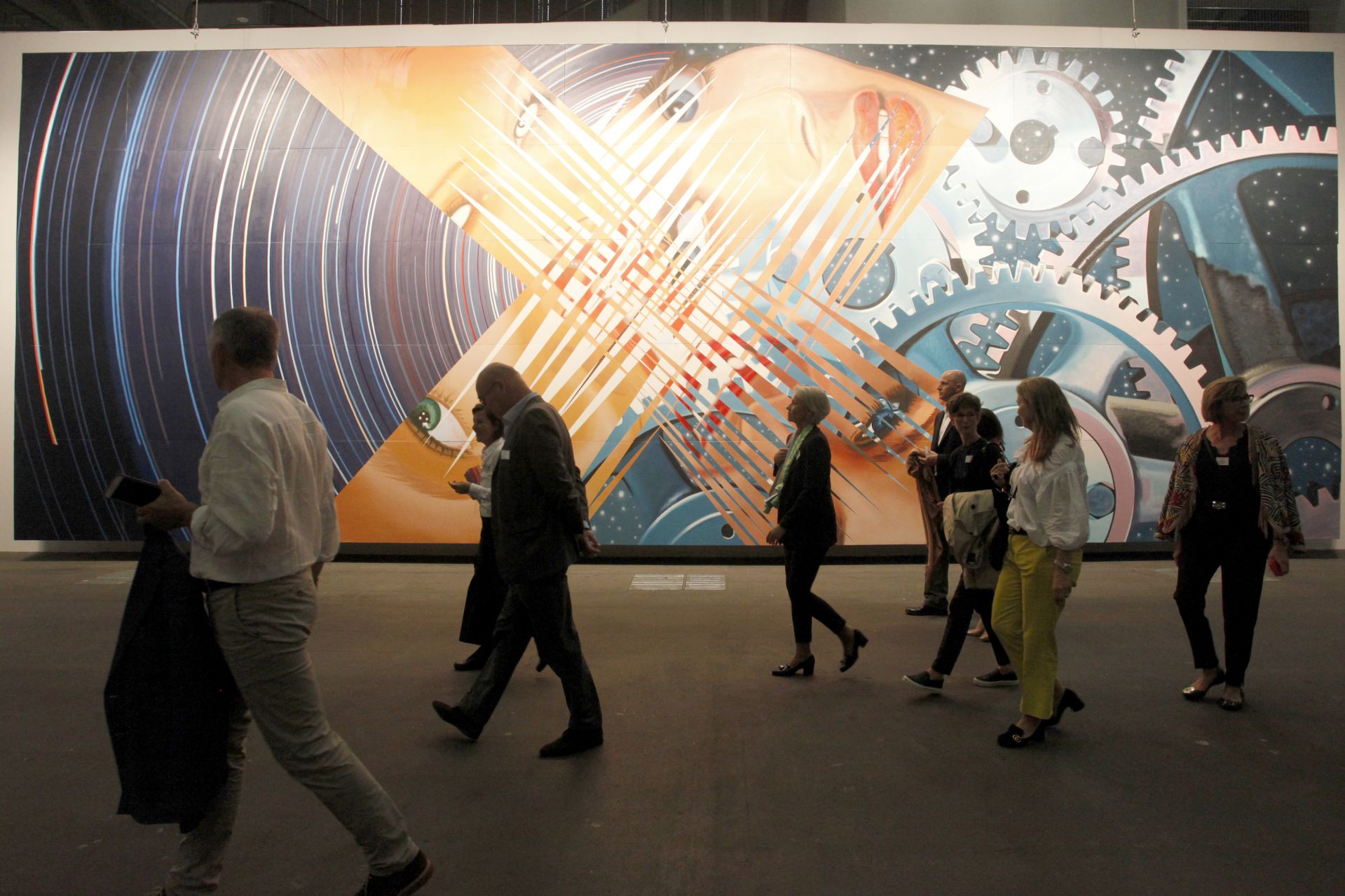 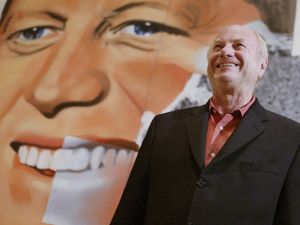 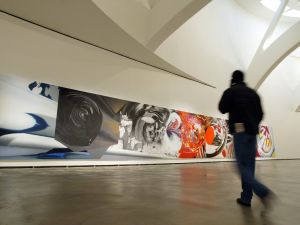 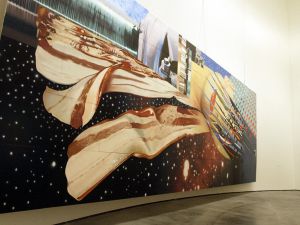 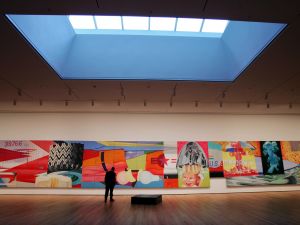 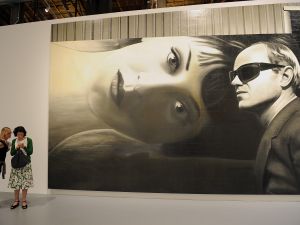 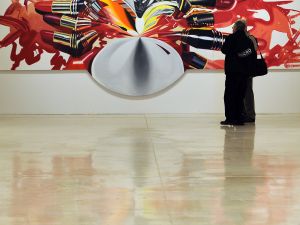 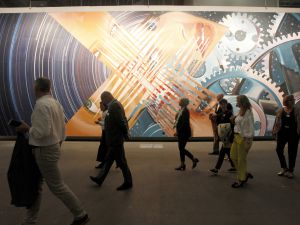 Pop artist James Rosenquist has died at the age of 83. The artist passed away in New York on March 31, after battling an illness, Rosenquist’s wife told the New York Times.

Rosenquist is best known for his large-scale murals, painted in bold and bright colors in a loose realistic style akin to those found in billboard advertising. Often, his paintings combine the imagery of everyday household items, recognizable figures, foods, and industry, organized into surrealistic, collage-style compositions. While the artist is closely associated with pop artists from the same period, such as Andy Warhol and Roy Lichtenstein, who also borrowed and appropriated pop cultural imagery for their artworks, it was Rosenquist’s experience as a sign painter for billboards across the city that distinguished his work from that of his peers.

In his 2009 autobiography, Painting Below Zero: Notes on a Life in Art, Rosenquist described what made his work different from the artists Andy Warhol and Roy Lichtenstein, saying, “I was never concerned with logos or brand names or movie stars, like Andy, for instance. Unlike Roy, I wasn’t interested in ironic simulations of pop media; I wanted to make mysterious pictures.”

1964-65’s F-111 is perhaps Rosenquist’s most famous painting, both for being a politically-inspired outlier within the artist’s otherwise apolitical oeuvre, and for its monumental size and ambitious installation at the Leo Castelli Gallery. The 86-foot-long mural, which is comprised of 51 canvas and aluminum panels, depicts a fragmented strategic bomber plane alongside images of a mushroom cloud, a young girl beneath a metallic hair dryer, a beach umbrella, spaghetti and a firestone tire. The painting was created as a response to the Vietnam War, and was made to cover the entirety of the walls at Castelli’s Uptown Manhattan gallery, while the floor was covered in dry ice that created a smoky effect inside the space.

“Of course those paintings seem to be hardly sellable, but they did sell nevertheless because there are some imaginative collectors—thank God, very few of them—who do buy those things, God knows why but they do,” said dealer Leo Castelli of the painting in a 1978 interview with Barbaralee Diamonstein-Spielvogel for the segment “Inside New York’s Art World.” F-111‘s eventual buyer was collector Robert Scull, who bought all 51 panels. The painting is now in the permanent collection of the Museum of Modern Art.

Rosenquist, who was born in Grand Forks, North Dakota and attended the University of Minnesota, moved to New York in 1955 to study at the Art Students League. His studio, which had previously belonged to the artist Agnes Martin on Manhattan’s Lower East Side, was located in the same building as Robert Indiana, Ellsworth Kelly and Jasper Johns, according to the Times. But it was his relationship with Castelli—a titan of the New York art world who made a name for himself and his impressive roster of artists showing works by Andy Warhol, Robert Rauschenberg, Donald Judd and Bruce Nauman, to name a few—that propelled him to eventual art world stardom.

Rosenquist’s work has been shown in major exhibitions at the Jewish Museum, the Museum of Modern Art, Walker Art Center, the Whitney Museum of American Art and the Guggenheim Museum. His last solo gallery show was held at Galerie Thaddeus Ropac in Paris in 2016.

On his work being classified as pop art, Rosenquist wrote in his book, “Pop Art. I’ve never cared for the term, but after half a century of being described as a Pop artist I’m resigned to it…Still, I don’t know what Pop Art means, to tell you the truth.”