I first wrote a version of this in December 2009 for an old blog I had. The one-year anniversary of Prince’s death brought it to mind and it seems even more relevant than when I first wrote it.

Have you seen this video? It has been passed around on the web for a while now. Stay with it until you have seen Prince solo to the end of the song.

What you see here until about the 3:30-minute mark is a perfectly serviceable and respectful cover version of “While My Guitar Gently Weeps,” a tribute to George Harrison.

You have the studied aloofness of Tom Petty, sleepwalking through the vocals and acoustic strumming. You have Jeff Lynne doing his part perfectly reasonably, thankfully unable to weigh the song down with goofy backing vocals and other shit he piles on when he’s in a studio.

You have Steve Winwood—arguably the most soulful Englishman next to Jagger, Rod Stewart (and who else?)—on the B-3 organ. You see the latest incarnation of the Heartbreakers being what they have always been: one of the greatest backing bands of all time, Petty’s not-so-secret weapon. And you have Dhani Harrison, George’s son, strumming along.

And then there’s the guy in the cap, aping, note-for-note, Eric Clapton’s original solos from the legendary White Album recording. It took me a bit of searching to figure out that his name is Marc Mann and he is talented enough that he’s been chosen as a sideman/session guitarist for Lynne and George Harrison at various junctures.

Now, you watch and you might think, “Cool, he is nailing the bends, the notes, the whole original solo.” And the Clapton part was more than just soloing; it was a wholly integrated arrangement for guitar parts. Yet, when it came time for the actual solo, Mr. Mann—who I am sure is quite capable of striking out with his own improvised solo—makes a respectful choice to play the parts Clapton laid down. Totally fine, if forgettable. And unnecessary.

Then you notice the pimp-hatted Prince playing sideman on stage left. But he seems like a loaded gun with a hair trigger. And sure enough, around the 3:25 mark, you see Dhani—who should never play poker (take it from someone who knows)—unable to stifle a grin; he has an idea of what’s coming.

Sure enough, the soloing, the song, perhaps the whole night is then turned over to Prince, who in the last few years (for me) has made the argument that he is the greatest lead guitar player since Hendrix. He is truly heir to Jimi Hendrix.

As we all know, Hendrix revolutionized lead guitar playing. And he did so without the benefit of some of the technological advances made since his death, stuff like intricately balanced distortion pedals and other devices that are made to harness the sort of feedback and sustain that Jimi, Pete Townshend, et. al. had to rein in by manipulating volume controls and primitive distortion stomp boxes before their signal reached ridiculously loud tube (valve) Marshall and Hiwatt amps.

So Prince has the benefit of a few more devices to exercise a bit more control, but it really doesn’t matter much. What made Hendrix’s playing so distinct was the way he laid it all out there, performing without a net, taking chances that only bop and post-bop jazz guys were taking, and doing so at massive volume, so that he in turn influenced the most forward-thinking of jazz cats like Miles Davis.

Here, in one single performance, Prince comes on like an atom bomb and levels the place, destroys everything in his path. He performs at a whole different level.

By going out there with no regard for tradition, for the original solos, but just going out there and simply shredding it, putting his own stamp on the song, not only does he shine up an otherwise-dull rendition; he brings out the best of the song and takes it to an entirely new place while leaving the rest of the band to keep one foot in the original. Is there any better way to truly pay respect to the original song, its author, and to Clapton’s original sign posts that pointed the way to its potential?

While the rest of the band, the old guys, all kind of lay back and play it cool, keeping the song grounded—to the point of keeping every backing vocal part in place (“look at you all…still my guitar gently weeeeeeeeps“)—Dhani’s face is aglow. He looks around at the other guys with a sort of “can you fucking believe this?!” expression, hoping to make eye contact and get some acknowledgment and musical communion.

He seems to get no such feedback from the grizzly old dinosaurs. Dhani is our—and George’s—stand-in and representative. He is there to express what we’re feeling sitting at home: “Holy Mother of God! Is this not one of the greatest virtuoso guitar solos of the past couple of decades?!”

Dhani is quoted at this Beatles fan site, “Harrison concludes by stating that he doesn’t like music that pulls its punches. ‘All the records I like are hardcore. Bob Dylan is the hardest core of the core. Air are chilled out, but they’re hardcore musicians. U Srinivas is a hardcore dude from Madras. Leadbelly? He killed a man! Enough said!’ ”

I’ve never been a big fan of basketball, but one of the only analogies that springs to mind is that of a perfectly average team of aging pros all of a sudden spiked with a young Michael Jordan or LeBron James; a superstar who opens the game up to spectacle; someone who is so comfortable in his own skin, with Zen-like presence in the moment and absence of extraneous thought and second-guessing that they rise above all the other players, but lift the whole team up to a new level at the same time.

Sure, there are other players who are jealous and resentful. But then there are players like Dhani, who are playing without ego and who just appreciate being in the presence of greatness.

O.K., some (likely some of the guys on stage) might just shrink from this and see Prince as showboating. And the way Prince just struts offstage after his seemingly pre-rigged guitar just swoops up and disappears above the stage surely indicates the same sort of arrogance displayed by Jordan when he would refer to teammates as “my supporting cast.” But for Jordan, the ball was just an extension of his hands and he was one with the whole court. For Prince, it’s the guitar and the stage. He is not composing the solos before he plays them; it’s all one subconscious stream. He has tapped in. These are the great ones. And he makes a convincing argument here that he just might be the greatest.

Others might claim, “Sacrilege!” for messing around with Clapton’s original solo, as old timers who watched and idolized Bob Cousy might claim that the game should be about passing and set shots. And I would agree that Clapton’s solos are perfect for the song: the weeping, the tasteful use of bending strings as displays of sorrow. But that’s been done. That recording is over 40 years old and has been played somewhere every day of those subsequent years. Now George is gone, and the world is even more in need of “sweeping.” George sang, against hope, “With every mistake we must surely be learning.” Prince is the post-modern answer.

So Prince takes up where Clapton and Harrison left off, changing the weeping to the outright gnashing of teeth, moaning, yelling and raging. He performs without fear, though, without the net, as he went on to do in the also-legendary performance on SNL a few years later, of the song “Fury.”

The rest of the band should have kicked up some dust, as well. But they’re just guys in suits playing for other old guys in suits; the worst of the Rock and Roll Hall of Fame concept; by its very existence, the HOF fossilizes vital music. Crusty rockers content with their place in the lineage. It is, arguably, a place that had a hard time making space for someone like Prince, who defies categorization.

The performance is from 2004, the year that both Prince and George (posthumously, as a solo artist) were inducted into the Hall. It feels like Prince is out to prove he can out-rock any straight-up “rock” artist. He is the rightful heir to the Hendrix mantle. I choose him over Stevie Ray. You heard me. Any day of the week.

I think George would approve of the new take on the song. Many, if not most, of his songs had the conscience of Eastern thought running through them. LSD and the Maharishi woke him up in the mid-’60s and he kept on teaching: “All things must pass away”; “Isn’t it a pity/Now, isn’t it a shame/How we/break each other’s hearts/And cause each other pain/How we take each other’s love/Without thinking anymore/Forgetting to give back”; “The love you are blessed with/This world’s waiting for/So let out your heart, please, please/From behind that locked door”; “Beware of sadness/It can hit you/It can hurt you/Make you sore and what is more/That is not what you are here for.”

These are all paraphrases of the teachings of the Buddha and other Eastern philosophers. They taught that so much of the negativity in the world is borne out of fear. As a result, most of us live defensively most of the time.

Buddha says get back to your original self, who you were, your face before you were born. Everything after that is adding to a mask, a shield, buttressing yourself against the pain and suffering in the world. Open yourself back up. Live in the moment. Realize we are here for a limited time. Don’t be afraid of making a fool of yourself. I’m not saying go to work at your office in a pimp suit and strut out of a meeting after making a particularly astute and bold point. But live it up a little.

Just ask yourself every once in a while, “What would Prince do here?”

Yeah, I know, now it all seems trite, “Dance like no one is watching,” and all that Chicken Soup kind of shit. But it’s because it’s all true: “He not busy being born is busy dying,” as Bob Dylan sang.

Almost everyone on that stage with Prince is playing defensively. Prince is busy being born. 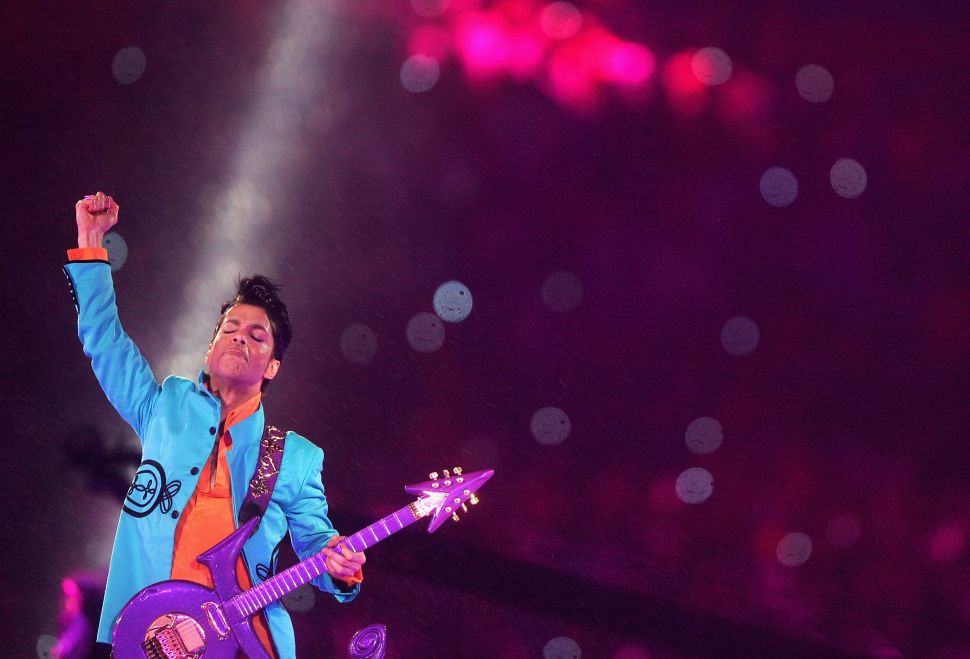