The wait is over: Victoria Beckham finally received an OBE.

Following just a bit of controversy (as she shared the news of her honor before it was officially announced), today Beckham was officially recognized for her contributions to the fashion industry. Her award also included a mention of her charity work. She accepted the award from Prince William, in a service held at Buckingham Palace.

“If you dream big and work hard you can accomplish great things,” she said, regarding her title. “I’m so happy to share this very special occasion with my parents and husband; without their love and support, none of this would be possible.” For the occasion, the designer, who turned 43 yesterday, wore a demure black dress with a handkerchief hem. She paired the frock, which we assume is of her own design, with a pair of pointy suede heels in a burgundy hue.

But she’s not the only member of her family to receive this royal honor; David Beckham was awarded an OBE in 2003 for his ambassadorship to England, both on and off the soccer field. For that occasion, Posh Spice, as she was known back then, also donned a black dress, but one with a much shorter hem.

She went on to found her eponymous fashion brand just five years later, in 2008, and has developed a refined sartorial taste since then. Her line has gone on to accept the Best Brand prize at the British Fashion Awards in both 2011 and 2014. She even brought her chic designs to the masses earlier this month, via a collaboration with Target. Naturally, the range sold out almost instantly. 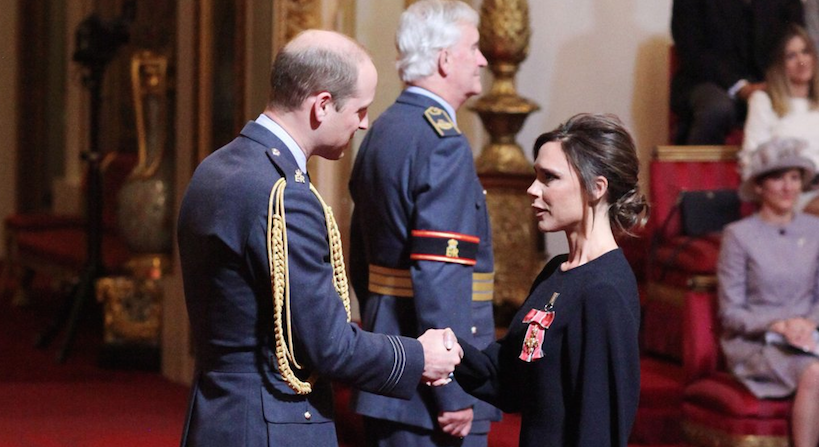