The winners of the 2017 Pulitzer Prizes combined hard-hitting examinations of President Donald Trump with impactful local reporting. Indeed, the winners in five categories had a connection to the current occupant of the Oval Office.

David Fahrenthold, the rare print journalist to go viral, won the award for national reporting for his months-long examination of Trump’s philanthropy (or lack thereof). Fahrenthold famously crowdsourced his research on Twitter by posting handwritten lists of charities and asking readers for help in figuring out if Trump had actually donated to them.

The New York Times received the prize for international reporting for “Russia’s Dark Arts,” a series of articles examining the European nation’s growing power. Trump also played a part in this win, as one of the articles in the series revealed that the Ukrainian government had paid millions of dollars in consulting fees to former Trump campaign chairman Paul Manafort.

Conservative columnist Peggy Noonan won the award for commentary for her many columns about the divisive presidential campaign, which had eye-catching headlines like “Imagine a sane Donald Trump.”

Trump’s influence across the world was also reflected in the breaking news photography category—Daniel Berehulak received the prize for his look at Filipino President Rodrigo Duterte’s brutal anti-drug campaign. According to Duterte, Trump endorses this brutal regime (the two spoke soon after Trump’s surprise election win).

The arts prizes also showed Trump’s impact on American discourse—there was extra drama in the Pulitzer Prize for Drama this year, since the winner was Lynn Nottage’s play Sweat, which examines a Rust Belt town similar to the ones that embraced Trump.

Not every work honored involved the 45th president, however—ProPublica and the New York Daily News shared the Pulitzer Prize for public service for a series chronicling the NYPD’s widespread abuse of eviction law.

And on the local level, the Pulitzers honored the Salt Lake Tribune for its reporting on the mistreatment of sexual assault victims at Brigham Young University.

War reporter C.J. Chivers won the Pulitzer for feature writing for a piece we ranked as one of our favorite longform stories of last year: “The Fighter,” the story of Sam Siatta, a Marine Corps veteran arrested and charged with home invasion.

Given the breadth and diversity of the winners, Pulitzer Prize administrator Mike Pride used his opening remarks to reassure readers that journalism is alive and well in the digital age.

“We are not in a period of decline in journalism,” he said. “Rather we are in a revolution.” 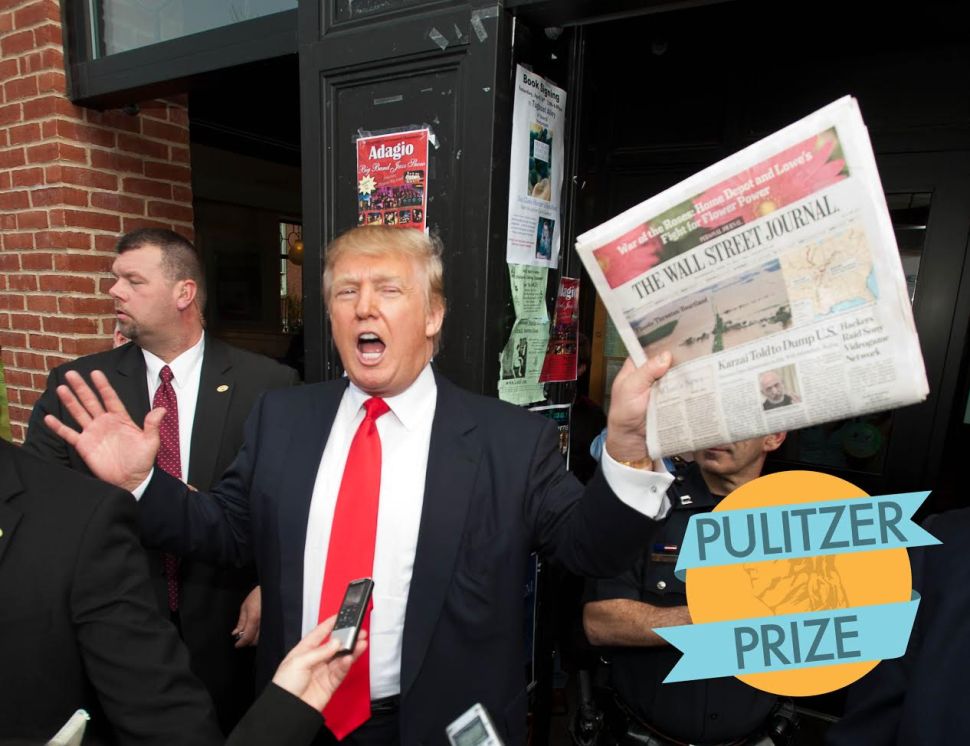