Welcome to our TV Fashion column, where TV Ate My Wardrobe‘s Emma Fraser discusses the trends in television apparel. This week: The TV shows that aren’t afraid to put a bird on it.

It has been six years since Portlandia introduced a phrase that I can’t help thinking and even uttering out loud when I see/purchase an item with a feathered being on it. What started off as gentle mockery of the unofficial motif of everything twee and hipster has turned into a knowing nod to this image. Just as Tippi Hedren was initially powerless against the might of this winged creature then so are we when it comes to bird print on TV shows including Elementary, Girls, New Girl, The Mindy Project and The Flash.

Earlier this month Portlandia creators Carrie Brownstein and Fred Armisen spoke to Entertainment Weekly about the history of this sketch and how it was the result of a “craft explosion…This isn’t your average piece of paper—this is stationery now. Now that there’s a bird on it, you should put a frame around it.” Birds, like florals and stripes are pretty ubiquitous on clothing as well and while this sketch means that Carrie Brownstein feels “too self-conscious wearing things with birds now,” there is still plenty of choice for the rest of us.

After a quick scroll through my Instagram feed this is a phrase I have typed in reference to my favorite pussy-bow blouse, pajamas and even a bottle of wine. My Instagram caption skills are not that varied or original. Carrie Brownstein might have to avoid this kind of print, but this is an excellent alternative to florals/stripes/ginghams that are dominating this season. Spring is here and birds are the perfect motif to celebrate the warmer weather. Just don’t make the same mistake as Portlandia’s Bryce Shivers and Lisa Eversman when a real pigeon flapped their way.

One thing I often talk about when it comes to bold patterns and color is how comedy utilizes these clothing aspects to reflect tone. The Unbreakable Kimmy Schmidt which returns next month—May 19—for Season 3 deals with a dark subject, but the colors Kimmy wears reflect her sunny outlook while also acting as a visual cue that this is a sitcom. Birds have appeared among the rainbow spectrum of sweaters and floral pants; owl pajamas in this case, a very popular sleepwear animal if other comedies/my own nightwear is anything to go on.

Recent episodes of Girls have also included pajamas that put a bird on it with Hannah trying to combat the New York humidity in various states of undress that included some very cute flamingo pjs from the aptly named BedHead. Flamingos are often seen as symbol of courtship particularly on prints where they face each other, but it worth noting that Hannah’s flamingos are not paired and this happens to be the episode where she briefly entertains the idea of getting back together with Adam only to realize this isn’t a practical reality. Instead she will go the whole motherhood thing alone.

Mindy Lahiri has also sported owls and flamingos in her collection of super cute pajamas that rivals New Girl’s Jessica Day. Both shows have a strong rom-com slant and bold print and color costumes to match, but Jess leans far more twee and craft orientated. The original Portlandia sketch is directed at people with Jess like quirky sensibilities. Plus the character is from Portland and Zooey Deschanel is queen of all things adorable. Mindy’s flamingoes are in the heart-shaped paired pose that you would expect from this type of bird and this makes sense considering how important romantic comedies are to this character and the worldview of The Mindy Project.

As with Kimmy, owls make an appearance and because I’m currently watching Twin Peaks for the first time this species has gone from being the symbol of wisdom to one I feel suspicious of—“the owls are not what they seem”—but they also make for good pajama print. A lot of the nightwear these characters wear comes from BedHead, but Jess’ owls are from the super affordable Target.

Birds aren’t just for bedwear and Jess has gone for swans on New Girl in the brand that is ideal for a sitcom palette and that’s Kate Spade. But it is actually Jess’ roommate who dominates the bird trend and Winston Bishop’s wardrobe is awash with button-down shirts and sweaters that demand to be noticed. Winston is arguably the best character on New Girl and he’s also got the most eclectic range of tops. Especially when compared to Schmidt’s suits and Nick’s rotation of plaid shirts and henleys. He even gave Sam – Jess’ boyfriend at the time – a bird shirt for his birthday in season 5 only for it to be rejected because Sam just doesn’t get it. For those who want to get the Winston look (this is something I encourage) try Bonobos and H&M.

Winston isn’t the only guy indulging in the bird print trend and on The Flash among his big collection of Threadless tees, Cisco Ramon also has a penchant for sprucing up a button-down with an animal from the sea and the sky. Recently he wore this one from Zara and while this is no longer available there are plenty of alternatives on ASOS in both men and womenswear.

Comedy doesn’t have a monopoly on all things bright and bold even though it is an obvious starting point for a whimsical wardrobe. On Elementary, Joan Watson brings her own sense of creative flare through her impeccable style that sets her apart from the usual crime procedural styling. Because Joan is a consulting detective rather than an official member of the police force this allows for a more dramatic spin on her costuming. I’ve written about her predilection for neckties and the pussy-bow blouse trend is one she swings toward with great enthusiasm as well as all things print.

Birds have featured quite a bit this season and there is nothing twee about crime fighting in this style. By pairing a Miu Miu top with a black blazer or a crane print Sandro shirt with a pinstripe vest there’s Joan’s signature blending of tailored menswear with something feminine. What this does is make these outfits police work appropriate while also maintaining Joan’s sartorial individuality. In Sunday’s episode “High Heat” Joan wears an Alice + Olivia skirt and shirt pelican print ensemble; there’s no masculine attire spin on this occasion and doing the matching top/skirt thing might be overwhelming, but because the prints are different sizes it works. Joan also has nightingale pajamas from Eberjey and we’ve come full circle back to bird themed bedwear.

What makes this such an appealing print choice other than being able to knowingly lean into the whole Portlandia thing comes from how many species there are. As with florals there seems to be endless options of illustrations available and how they can be incorporated into the most intimate of wardrobe items to everyday work attire and casual wear. So whether you are assisting a superhero, solving crime, hanging out with a cat by the name of Ferguson or lounging around the house; embrace the twee and just put a bird on it. 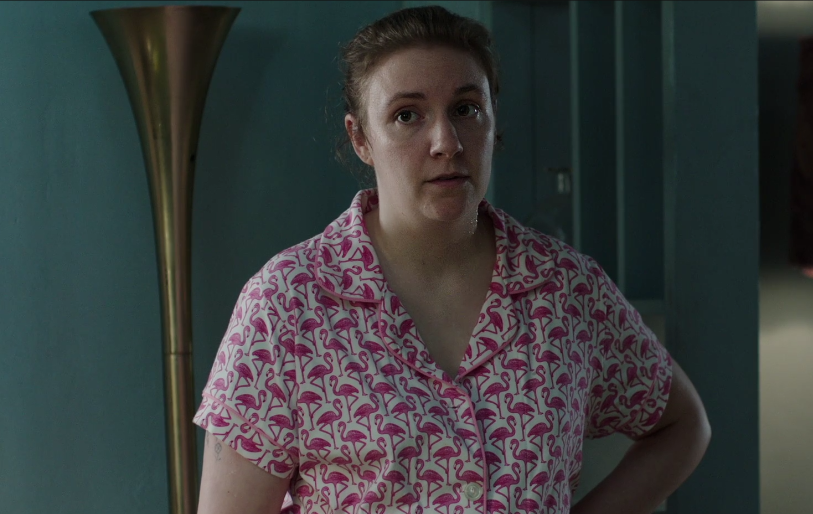