Shoe designer Rupert Sanderson is no stranger to the British royal family. In fact, Kate Middleton is a loyal fan of his suede stilettos, frequently wearing them to the various public appearances she is required to make. The Duchess of Cambridge has donned a pair of navy suede Malory pumps from Sanderson no less than four times, including that one time she met the Obamas; she publicly removed her nude Sanderson heels in a tribute to Ghandi in New Delhi; and she once matched her grey Erdem coat to a pair of his grey kicks.

In fact, her inclination to wear Sanderson’s footwear has left many wondering if this is her favorite brand. Regardless of that answer, Sanderson is definitely a huge fan of the royal family. He even designed his Fall 2017 range with them in mind, including regal details, like a buckle that’s a nod to Queen Elizabeth II’s signature pearls. There are also a ton of modest heel heights that could easily be worn by the royal ladies.

But Sanderson took this royal inspiration a step further, by simply putting the Queen’s face on a shoe. Made exclusively for Bergdorf Goodman, the strappy Cara sandal features a beaded interpretation of the Queen of England, replete with a rouged lip, a blue sash and a heavily bedazzled crown.

“It was all about the notion of using art and craft to express a story with a dose of quintessential British humour,” Sanderson told the Observer about the shoes, via email. “The Queen Elizabeth II sandal is iconic, regal… AND beady!” In addition to featuring the Queen, Sanderson is offering embellished portraits of Linda Fargo (also known as Bergdorf’s retail queen) and Frida Khalo (a queen in her own right) on these shoes. Priced at $695 each and available at Bergdorf Goodman, this is one royal way to kick off the spring season. 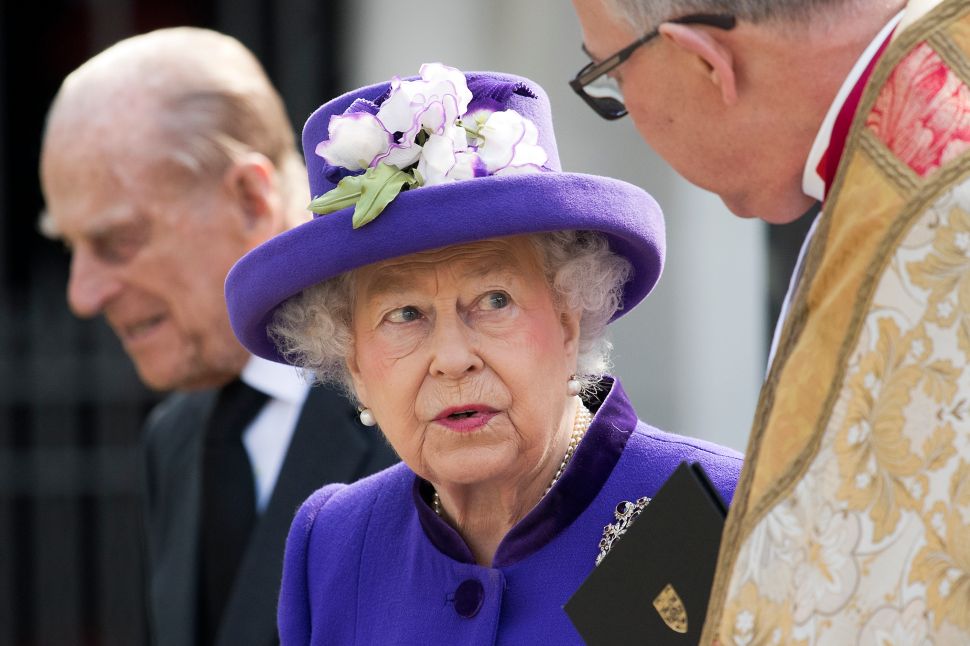