We pick up where we left off last week, at Lisa Vanderpump’s Diamonds & Rosé party. Eileen Davidson and Lisa Rinna arrive, with Rinna immediately making a snarky remark about the décor. “Oh, I’ve missed the disco.” Huh? “You’re such a bitch,” Eileen laughs. She has no idea how correct she is.

Hilariously, Rinna says in interview that LVP likes to think she has “the power,” and she “likes to let her think that…Like, let’s give that to her. She doesn’t have a whole lot.” Apart from wealth, a supportive husband, beautiful family, successful businesses, beauty, and one of the most gorgeous homes on the planet. Poor LVP!

Rinna continues her vile routine by praising Dorit Kemsley’s gilded hairstyle to her face, then saying in interview that “It looks like a big gold goose took a big gold shit all over Dorit’s hair.” She later compares Erika Gerardi’s pink hair with Dorit’s and says, “Cotton candy is a little more appetizing to me than bird shit.” What a sweetheart!

Eden Sassoon looks absolutely stunning in a princess dress and an updo, showing off her razor-sharp bone structure. Her strobing game is on-point. Rinna complains to Eden that she didn’t back her up in Hong Kong when the subject of Rinna’s supposed Xanax problem came up. Eden admits that she just said her piece and then let Rinna fight her own battle – one Rinna herself started, to be fair. Rinna and Eileen act as if this is a totally nonsensical approach. Eileen says, “Who gives a shit?” when Eden says she doesn’t want to be a troublemaker. Rinna and Eileen are turning hard on Eden and it’s gross.

Kim Richards is there, looking the best she has in years. She is totally glowing with joy from being a grandmother. But when Dorit starts telling her about what went down with Rinna in Hong Kong, Kim’s bubble of happiness is pierced. Later, when she and Dorit are talking to Kyle and LVP, Kim can’t help but ask, “Where does it end with her?” She’s super upset. “It’s not my problem, but it is.” No, it’s not. Just be happy, Kim.

When Rinna wanders nearby and tells her how gorgeous her grandson is, Kim says thanks. LVP mutters under her breath, “Why don’t you tell her you’re talking about her right now?” So she does. Then Erika dares Rinna to go over to Kim. She doesn’t.

Instead, Rinna scurries over to Eileen to tell her about the interaction. “I gotta figure this out,” Eileen says. “I hate myself for this.” As you should.

Eileen pulls Rinna away from the table, then calls Kyle Richards over. When LVP and Dorit make their way over, shit gets real.

Dorit tells Rinna it was very hurtful and mean spirited to attack her the way she did in Hong Kong. “I’m sorry you feel that way,” Rinna says icily. She says it all came from being told Dorit was accusing her of having a Xanax problem. Dorit asks her where she got that idea. “Well, Eden,” Rinna says, gesturing to poor Eden, who was pushed into this scene by producers in the nick of time.

Eden protests, and rightfully so: All she said was that Dorit asked her if there was an issue, not that Dorit was spreading a rumor. And we can see from the scene itself that it was a natural question to ask. Rinna acts completely insane, “forgets” saying horrific things about Kim and others, and nobody’s supposed to wonder if she’s dipping into her overstuffed Ziploc bag of pills too often? Rinna playing the victim is unbearable.

LVP tells Rinna straight-up that she’s being paranoid. Dorit explains to Lisa how serious her accusations about her marriage and their supposed drug abuse are. Rinna says, “I’m just observing what I see! That’s all.” I don’t think I have ever disliked someone on a reality show as much as I do right now. She is literally the worst. I’d rather hang out with Satan himself.

Erika and Kim have joined the fray by this point. Kim points out that there’s a pattern: Rinna goes after everybody. The common denominator is Rinna. In interview, Rinna admits it’s “so easy” for people to say she’s crazy and mean. Her response? “Whatever.” Oh, okay, you persuaded me.

Rinna tries to deflect onto LVP, saying it’s rude for her to be going after her. “Does it feel good?” she asks. Dorit says no, it doesn’t, because unlike her they don’t enjoy pulling someone up on their transgressions. Rinna gets in Dorit’s face, and Dorit tells her to back off. Say what you want about Dorit, but she can stand up for herself.

Hilariously, Rinna says Dorit should have called her if she wasn’t happy about what happened in Hong Kong. Dorit asks why on earth she would call someone who acts like such a “nutter.” Rinna deflects again, changing the subject: “Look what you did to Erika!” Oh, God – who isn’t sick of this topic already?! Rinna lays it on thick about how “disgusted” she is by what Dorit “did to Erika for four months!”

What happens next is a complete rehash of this super boring subject. Erika says Dorit didn’t apologize even though she did. “Oh my God – the amnesia, it’s contagious!” Kyle says in her interview. Erika acts like a complete mean girl, playing the victim and mocking Dorit at the same time. PK has been lurking, and Erika pulls him into the conversation. PK tells her, “You’re not deliberately cold – you’re inherently cold.” After insisting in Hong Kong that it was hurtful to be called cold, Erika now says she doesn’t care what anyone says. “You don’t like me? Get in line.” I know Erika has an alter ego in Erika Jayne, but this kind of contradiction is downright bizarre.

Even more outrageously, Erika insists of Dorit, “I’ve been nothing but nice to her.” Lady, we’re not just tuning in for the season finale. This is either a lie or Erika is nuts. PK says exactly that to her: “I’m afraid you’re delusional.” His delivery earns the only out-loud laugh I can muster for this episode.

Erika can’t win on this point so she shifts the focus to PK calling her “hone”y and demands that he stops. Look, I know it’s galling when a guy you don’t really know or particularly like calls you a name like that, but eyes on the prize, Erika: If you can support your argument that you’ve been “nothing but nice” to Dorit, now is the time to show your cards. It doesn’t look like you have any.

Sensing Erika is losing ground, Eileen butts in and tells PK she’s not cold at all. Yeah, no. Eileen clutches her pearls and complains in her interview that her husband would NEVER speak to another woman like that. Now she’s a fragile flower who needs to be insulated from confrontation? Dude is just calling these women out on their BS – nothing more, nothing less. And I NEVER thought I’d be sticking up for PK or Dorit.

Eileen dismissively tells PK, “Bye.” Nasty. He leaves, which was the smart thing to do when dealing with this level of shrew. He later tells LVP, “I can’t have a conversation with eight women when their husbands aren’t there.” This is showing a level of respect that hasn’t been earned by most of that group.

Suddenly, Erika says to Dorit, “I want to be friends!” Like hell you do. Dorit apologizes again, and Erika says, “I so would have loved to have heard this weeks ago.” You mean when you were pretending like you were over it? Dorit was supposed to read Erika’s mind, I guess. Somehow, they part ways on a civil note. I’m so glad they didn’t force a hug, because it might have made me barf.

The point, of course, is that nobody is focused on Rinna at this point. Well played, Rinna. Erika rejoins her, Eileen, Kyle and Eden at their table, and says PK was projecting when he called her inherently cold. Say what you want about PK, but he’s always seemed pretty outgoing in every scene. The lady doth protest too much.

Eden admits to Rinna that for everything that’s passed between them, she feels like she’s been used and discarded. Rinna totally dismisses Eden’s feelings, laughing that “the minute [Eden went to Vanderpump], you were done.” Rinna is a legit monster. Eden is extremely distressed, close to tears, pointing out that she really opened up to Rinna and gave her time, energy, and her heart. Rinna cackles and laughs in her face the entire time. Eden calls her “you bitch,” which is not unreasonable. Erika admonishes her for telling the truth. How can you witness this and defend RINNA?!

Rinna acts like Eden is crazy, saying “Wow” repeatedly and laughing. Talk about inherently cold. Eden says she was always there for Rinna, and Rinna says, “I never asked you to be there for me.” Eden reminds her that she did: Remember when she was having problems with Dorit and Kim? Rinna is basically speechless in the face of reality. “Wow. You’re really upset. Wow,” Rinna keeps saying – and not in a contrite way, but in a mocking, vicious way.

In tears, Eden runs away and LVP goes after her. Eden cries to LVP that if Rinna had told her that their friendship was over once she’d opened up to LVP, she would have chosen LVP over Rinna “any day.” Eden clearly feels betrayed, abandoned, and attacked by someone she trusted. It’s hard to watch mommy issues unfold like this. “You’re a lovely woman, Eden,” LVP tells her. “You don’t need to be loved by everybody.”

Rinna acts like she’s the victim of yet another attack. Eileen points out that Eden felt dismissed by everyone. “She was telling us that nobody ever listens to her, ever.” In her interview, Eileen says Eden should have kept her mouth shut and written a letter about her feelings, then torn it up. Why? Rinna was horrendous to Eden. Why do Eileen and Rinna get to express their feelings but everyone else should write letters and tear them up? And the way Eileen says it is so patronizing and condescending. I never believed until this episode that she had a mean bone in her body. I was wrong.

“She’s wounded,” Eileen says in a faux-compassionate tone. “It’s not our job to fix her,” Rinna says. No, but it’s your job not to be a heinous human being and hurt people for fun. Rinna closes out the season finale by dancing like a lunatic, alone. How fitting. 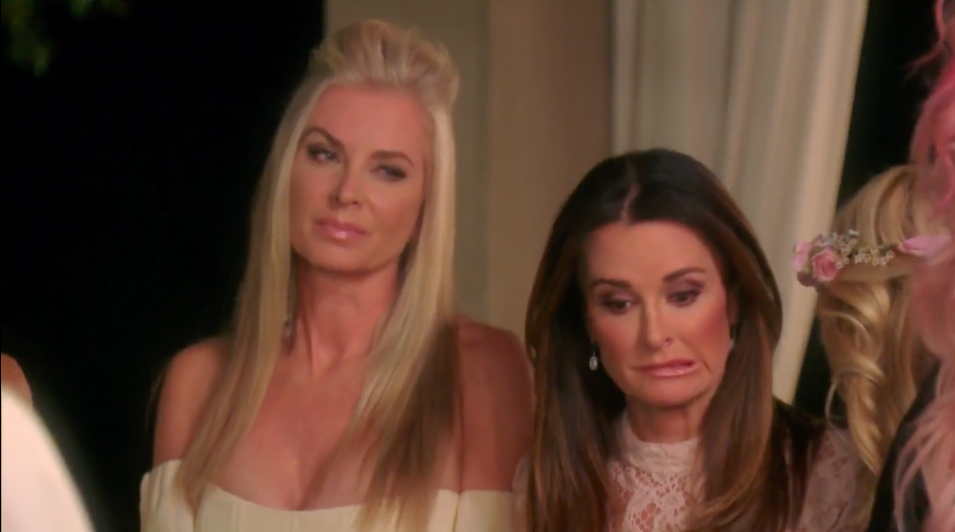